03/11/09 BUSTED: Google News Shows That Once Again The Greenwich Time Is Having Trouble Telling Time 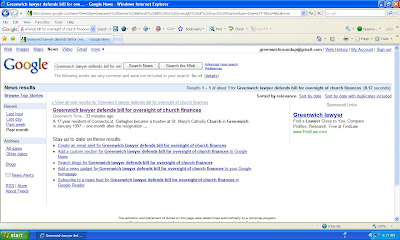 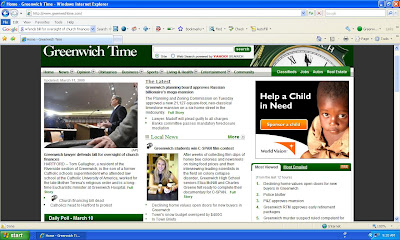 No One In Greenwich Saw These Stories On The Greenwich Time Until They Appeared As The Lead Story On The Home Page A Little Bit After 8:45 This Morning With Backdated Posting Times That Made It Appear That The Stories Had Been On The Home Page Since early Yesterday Afternoon .
These Back Dated Stories Never Appeared In The Greenwich Time Local News RSS Feed So Far Today Or Yesterday
If You Go To The Greenwich Time's Most Viewed RSS Feed You Don't See That Any Greenwich Time Readers Saw This Important And Controversial News Stories Just A Little Over A Half Of An Hour Ago.
If You Go To The Greenwich Time's Most Emailed RSS Feed You Don't See That Any Greenwich Time Readers Saw Were Emailing These Important And Controversial News Stories That Just Appeared A Little Over Half of An Hour Ago.
In fact, If You Click On The Top Photo Above You Will See That Google News Caught Hearst Newspapers Posting Backdated Articles About 33 Minutes Ago.
Click On The Google News Photo To Enlarge To A Full Screen Shot And Note The Time In The Lower Right Hand Corner Of The Screen.
If You Click On The Lower Picture You Will See The Blitz Of Back Dated Stories That Replaced Stanwich students learn about life in the Middle Ages A Little Over #0 Minutes Ago.
Please Note On The Right Hand Of The Screen The Most Viewed Feature Clearly Showing That Important And Controversial Stories Were Not Seen Even Though One Of The Stories Features Video.
Later Today These Stories And Video Will Probably Be The Most Viewed And Emailed Stories At The Greenwich Time.
As You Read These Three Stories Please Note The Back Dated Posting Times And Ask Your Self If Hearst Newspaper Managing Editor Bruce Hunter Will Allow His Staff To Cover Up And Lie About Posting Times, Then What Else Is The Greenwich Time Covering Up And Lying About
It Just Goes To Show That Greenwich Residents Can't Trust Greenwich Time Managing Editor Bruce Hunter And The Billion Dollar Hearst Corporation To Tell The Truth About What Is Going On In Greenwich.
Please Read These Back Dated
Hearst Newspaper Stories With A Grain Of Salt:

Greenwich lawyer defends bill for oversight of church finances
By Brian Lockhart
Staff Writer
Posted: 03/10/2009 09:57:13 PM EDT
HARTFORD -- Tom Gallagher, a resident of the Riverside section of Greenwich, is the son of a former Catholic schools superintendent who attended law school at the Catholic University of America, worked for the late Mother Teresa's religious order and is a long-time Eucharistic minister at Greenwich Hospital.
He also has met two Popes -- John Paul II in 2001 and Pope Benedict XVI in 2008.
So it's safe to say it would take a lot to keep Gallagher from attending Sunday Mass at his parish, St. Catherine of Siena
Church financing bill dead
Lawmakers cancel hearing on controversial proposal
By Ken Dixon
STAFF WRITER
Posted: 03/10/2009 12:57:41 PM EDT
HARTFORD -- The Democratic co-chairmen of the General Assembly's Judiciary Committee on Tuesday abruptly killed a controversial bill that would give Catholic parishioners more power on their local church boards.
Just before noon, the lawmakers canceled Wednesday's public hearing on the controversial change to the state law on the way Roman Catholic churches are run. They said the bill is dead for this year.
News of the cancellation -- and the termination of the proposed legislation for this legislative session -- emerged in the middle of a noon news conference of minority Republican lawmakers, who claimed the bill was unconstitutional.
WATCH THE GREENWICH TIME VIDEO:

Catholics head to Hartford to protest
By MariAn Gail Brown
STAFF WRITER
Posted: 03/10/2009 04:37:15 PM EDT
BRIDGEPORT -- It makes no difference to the state's Roman Catholics that lawmakers are yanking a controversial bill that they assert unconstitutionally meddles with their right to manage how their churches are run. Bishop William Lori vowed Tuesday afternoon to bring thousands to the Capitol to protest legislators' attempt at introducing a proposal that singles out their religion.
At a press conference inside the Catholic Center, the diocese seat of power for the 87 parishes it represents, Lori told reporters the church will send between 11 and 14 buses to the Capitol Wednesday to make a statement to state lawmakers.
NO ONE SAW THESE NEWS STORIES AND THE VIDEO AT THE FRAUDULENT GREENWICH TIME YESTERDAY, BECAUSE IT WASN'T THERE UNTIL A LITTLE OVER A HALF AN HOUR AGO
But Why Would Thin Skeined Greenwich Time Managing Editor Bruce Hunter Allow His Staff To Lie To The Greenwich Reading Public?
Because, Bruce Hunter Can't Take The Heat And He Needs To Get Out Of The Greenwich Time Kitchen
Day After Day Greenwich Roundup And The Greenwich Have Been Scooping The lackluster Greenwich Time's Rookie News Staff
Yesterday Was No Exception
PLEASE SEE:
03/10/09 Greenwich Post Breaking News
After outrage from area Catholics against a proposed state law that would strip bishops and parish pastors of their financial authority, a state Senate bill was withdrawn from consideration Tuesday.
Read more Comment Share
Please See Previous Story Posted Over Four Hours Ago
At 2:49 PM On Greenwich Roundup:
03/10/09 BREAKING NEWS: Tonight Priest$ And Bishop$ Are Going To Party Like Its 1999: Cowardly Lawmakers Run From Angry Bishop$
No Fiscal Accountability For Your Local Greenwich Parish
Greenwich Attorney Tom Gallagher Hands Hot Potato To Fellow Greenwich Resident Richard " I Fear The Power Of The Catholic Church" Blumenthal
Proposal To Regulate Catholic Church Pulled
By DANIELA ALTIMARI The Hartford Courant
A controversial bill that would change the way the Catholic church governs itself has been pulled and a public hearing planned Wednesday on the issue postponed until the measure's constitutionality can be determined.
Despite the postponement, the Catholic Church is going forward with plans to rally at the Capitol. Hundreds of people, many of whom where angry about what they view as the state's inappropriate and perhaps unconstitutional incursion into church affair, were expected at the hearing.
"We are pleased that the hearing was postponed, we are concerned that the bill is very much alive," said Joseph McAleer, spokesman for the diocese of Bridgeport. "The troops are mobilized...we're as committed as ever."At a press conference this morning at the legislative office building,
Tom Gallagher of Greenwich, who has long advocated that lay people be given greater responsibilities within the church, said he has asked Rep. Michael Lawlor and Sen. Andrew McDonald, co-chairmen of the legislature's judiciary committee, to put off the hearing until Attorney General Richard Blumenthal has reviewed the matter. .......
The proposed bill, which would take power from Catholic priests and bishops and turn it over to parishioners, sparked an angry reaction from church leaders, who questioned lawmakers motives. The bill would create lay councils of seven to 13 people to oversee the finances of local parishes, relegating Catholic pastors and bishops to an advisory role.....
PLEASE ALSO SEE:
03/10/09 Ex- Greenwich Representative Dolly Powers Started Controversial Bill That Caused Bishops To Go Nut$ !!!!
MORE INFORMATION:
In Greenwich, the Rev. Michael Moynihan resigned in January 2007 from St. Michael the Archangel Church after a preliminary audit uncovered $500,000 in spending the church couldn't account for amid what Lori said at the least represented "badly tangled" financial records.
Please Also Take A Look At This:

Please send your comments to GreenwichRoundup@gmail.com or click on the comments link at the end of this post.