Please send your comments, news tips and press releases to GreenwichRoundup@gmail.com
Posted by Greenwich Roundup at 6/20/2010 06:09:00 AM No comments: Links to this post

06/20/10 Lovely' young woman who worked at a home on Lake Avenue gone, her killer sentenced yesterday to 20 years in prison for 2008 homicide 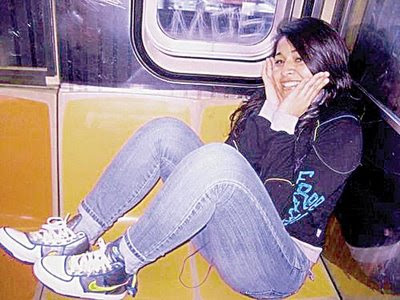 The mother of a slain young woman who worked as a nanny in Greenwich, goes to court to see her daughter's killer.

She traveled from Ecuador to see the killer who strangled her daughter with an electric cord get sentenced to 20 years in prison.

Yes it is true, the killer got only 20 years in prison for the 2008 homicide.

"There is nothing that can justify what he did," Alicia Bueno told the judge at the sentencing of Diego Leonardo Campoverde-Cabrera, 28, for the aggravated manslaughter of Andrea Catalina Reinoso-Bueno, 22.

Ms. Bueno traveled from Cuenca, Ecuador, for the sentencing. She was dressed all in black and spoke through a Spanish translator.

"I am condemned to live without my daughter for my whole life. I understand for him it will be painful to spend many years in prison but you can't pay for a life with money or years in prison," Ms. Bueno said. "My daughter paid with her life and she did nothing wrong. There is no reason. No reason."

Diego Leonardo Campoverde-Cabrera also spoke prior to his sentencing, and during an apology to the family member of the victim, he said "Just like them, I am going through a lot of pain because I lost the woman I love."

Superior Court Judge Paul DePascale was dismayed by Campoverde-Cabrera's logic and said, "The difference, sir, between what you feel and what they feel is that they bear no responsibility for what you did."

On Nov. 16, 2008, police officers responded to a 911 call at the victim's Windsor Street apartment and when Diego Leonardo Campoverde-Cabrera answered the door the officer found Reinoso-Bueno's partially clothed body inside, officials said.

The young woman had ligature marks below her jawline from being strangled, Hudson County Assistant Prosecutor Kelly Simpson said, adding that she also had head trauma and was stabbed twice in the torso with a metal-tipped curling iron.

Ms. Reinoso-Bueno had just returned to her boyfriend's apartment after spending a week in Greenwich, Conn., where she worked as a nanny, officials said. The family she worked for in Greenwich helped identify her body.

Diego Leonardo Campoverde-Cabrera was originally charged with murder but pleaded guilty to aggravated manslaughter in April. Under the plea deal DePascale could have sentenced the undocumented Ecuadorian to up to 26 years in prison.

Diego Leonardo Campoverde-Cabrera has spent the past 566 days in Hudson County jail in Kearny where he said he has been studying the Bible. He must serve 17 years of his sentence before becoming eligible for parole.

After the sentencing Ms. Reinoso-Bueno's cousin, Jeanneth Leon, quickly broke into tears while telling of a nine-month period during which she lived with the victim in Queens.

"All the time she was happy, loving, friendly," said Ms. Leon, whose husband, Eduardo Rangel, also attended the sentencing. "She was so nice with us and with our daughter. She was very lovely."

Greenwich In The Blogosphere:

Please send your comments, news tips and press releases to GreenwichRoundup@gmail.com
Posted by Greenwich Roundup at 6/20/2010 04:17:00 AM No comments: Links to this post

06/20/10 The Latest News About Dan Debicella, One Of The Candidates Looking To Replace Congressman And Greenwich Resident Jim Himess

Please send your comments, news tips and press releases to GreenwichRoundup@gmail.com
Posted by Greenwich Roundup at 6/20/2010 01:58:00 AM No comments: Links to this post

Please send your comments, news tips and press releases to GreenwichRoundup@gmail.com
Posted by Greenwich Roundup at 6/20/2010 01:44:00 AM No comments: Links to this post