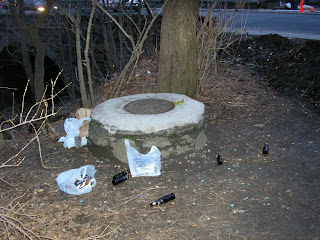 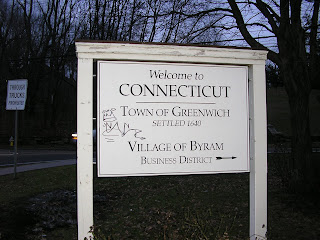 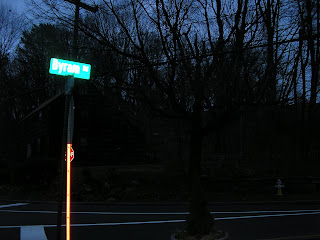 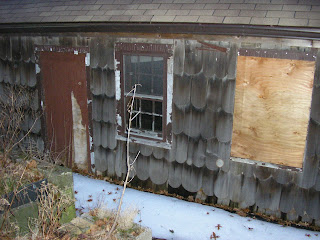 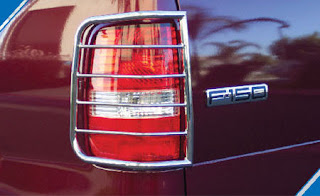 Just Look At What They See When They Enter The Town Of Greenwich And The Village Of Byram.

The Place Is A Dump.

If you look to the right you will see a man who rides a bike from Port Chester to drink all day long.

He doesn't drink from an open container in Port Chester, because he would be locked up.

Every school day he drinks in front of Byram children as they get on and off their school busses.

I don't want to show a picture of him, because he suffers from an illness.

However, here is the mess he leaves.

I have personally went down to the vest pocket or gateway park and cleaned this mess up many times.

If you look to the you will see the Welcome Sign covered with gang wittings.

It sure is hard for Byram School children to say no to gangs, when they think that DPW workers or the police are too scared to remove the gang symbols.

This gang related witting is
killing business in Byram.

Greenwich residents from Old Greenwich, Riverside and the Back Country just are not used to shopping in areas marked by criminal gangs tags.

But if you don't like this little vest pocket park, then go across the street there is a another park with a historic house that is used as drug or crack house.

It sure is hard for school children just to say no to drugs when they see druggies right across the street from their bus stop.

But don't worry the Byram Police Officer is just a few blocks down on US1 checking for burned out tail lights.

Meanwhile, at night cars parked on Byram streets are having their windows smashed, mirrors knocked off and tires slashed.
Posted by Greenwich Roundup at 12/31/2007 04:04:00 AM No comments: Links to this post

12/31/07 - Timelime Proves That Police Officers Retaliated Against A Greenwich Legislator, Because He Spoke Out About The GPD And Byram 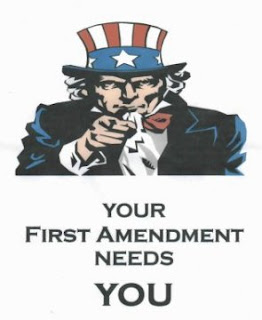 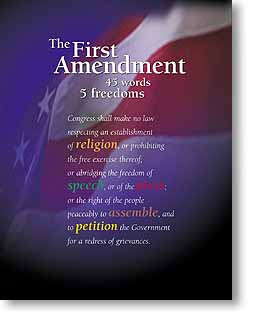 I am going to take a few moments to correct the hopelessly biased Greenwich Police Captain Michael Pacewicz and expose his amateurish attempt at a cover up.
Previously the following had been posted here at Greenwich Roundup Here Is A Timeline:

"So at 6 when the Sam Romeo show starts to come on two police officers come into my wives store asking for me. They tell me they ticketed the car that I had been complaining about and now they were going to inspect my wives's store for infractions.
They took down my name, address, social security number, date of birth, and social security number, but they did not ask for my frighten wives's information.

Then they were demanding that I give them a drivers license. I told them I did not drive, because I did not drive. I have a glass eye in my right eye and that I do not see to good out of my left eye.

I then told the officers that they knew exactly who I was, because one of the officers had made remarks to me previously, because I had filed a civilian complaint against a police officer, who latter sued the Greenwich Police Department for discrimination and said the Greenwich Police were inappropriately using road blocks to profile poor and minority residents of Byram."

############
6:00 pm Two Police Officers come into my wives store and conduct an illegal search of non-public areas of the store (the back rooms and behind the cash register). I am threaten with arrest and after about 45 minutes I am given a ticket that is taken back.

"Tonight, I am going to speak on the Sam Romeo show about the poor job that the police department does of patrolling and protecting Byram.

Mr. Romeo rightly demands accountability of all departments of Greenwich Government. Yet he refuses to use his WGCH microphone to demand the same accountability of the Greenwich Police Department.
Please understand that I do not think at this time that the individual officers are the problem.

I support the police officers, my car is loaded with Greenwich police union stickers going back for years.

I really think the problem is with how the police brass manage the Greenwich Police Department. The Republican administration should have gotten an outside professional to replace Chief Walters."
Posted by Greenwich Roundup at 12/27/2007 02:31:00 PM

"Tonight it will be time again for Greenwich Matter's to air on WGCH from 6 pm to 7 pm.

The Show Features Sam Romeo has been strong critic of Greenwich Governmental Departments.

He demands accountability and sound management practices of the Greenwich Governmental Departments That He Goes After.

However, Sam Romeo Turns A Blind Eye To The Greenwich Police Department.

Mr. Romeo will make excuses for the Police Department Leadership, but he refuses to demand accountability.

Mr. Romeo strongly supports the Greenwich Police Department, as everyone in Greenwich does.

I personally believe that there are many outstanding officers in the Greenwich Police Department, but the management of those officers is a joke.

"Police Brass have been sticking to this lame brain theory that the 16 million dollar swindler Andrew Kissel hired a guy to tie his hands and feet in Flex Cuffs, pull his T-shirt over his head and then be stabbed four or five times in the back, because he couldn't bring himself to commit suicide."
Posted by Greenwich Roundup at 12/26/2007 09:20:00 AM

######
12/26/07 - Greenwich Murder Update
The Greenwich Police Department Should Call In Some Experienced Investigators - 18 Months Is Too Long. This Case Has Gone No Where !!!!
Murder theories Kissel's life, death focus of new book
Greenwich Time - Greenwich,CT,USA
After his arrest on federal mortgage fraud charges, Kissel he was shut out by his wealthy Greenwich friends and became closer with his assistant, ...

Why does the Greenwich Police Department have all of these unsolved murders?

So I took Mr. Romeo's advice and reached out to make the call.

I have a great deal of respect for Mr. Romeo. He is the reason I decided to put my name out to be on the Byram RTM.

However, Mr. Romeo's close association with some police officials and officers seems to clood his judgment on Police performance in certain areas of Greenwich.
Posted by Greenwich Roundup at 12/24/2007 10:55:00 AM

If I Had Not Made Exercised My Constitutionally Guaranteed Right To Free speech. I would not had suffered an illegal search or been threatened with arrest.