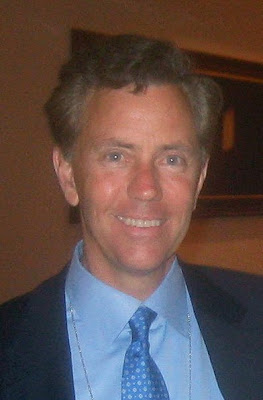 Edward Miner "Ned" Lamont, Jr. (born January 3, 1954) was the unsuccessful Democratic nominee for the United States Senate in the Connecticut United States Senate election held on on November 7, 2006. He faced incumbent Senator Joe Lieberman, who ran as the nominee of the Connecticut for Lieberman party, as well as Republican nominee Alan Schlesinger in a three-way general election in November, having defeated Lieberman 51.8%-48.2% among Democratic voters in a primary election on August 8, 2006. In the election, Lamont lost to Lieberman - Lieberman won 50% of the vote while Lamont won 40%, with 10% voting for Schlesinger and 0.5% voting for Green Party candidate Ralph Ferrucci.

Lamont was born in Washington, D.C. to Camille Helene Buzby and Edward Miner Lamont. He grew up in Syosset, New York, and is an heir to the fortune of his great-grandfather Thomas W. Lamont, who was a partner of the banking and finance firm J. P. Morgan & Co. After graduating from Phillips Exeter Academy (home of the Lamont Infirmary and Lamont Hall named for his great-grandfather) in 1972, Ned Lamont earned a bachelor's degree from Harvard University (home of the Lamont Library, named for his great-grandfather) in 1976, and a master's degree in Public and Private Management from the Yale School of Management in 1980. While at Phillips Exeter, Lamont was the president of the student newspaper, The Exonian, which was published twice a week during the school year. He began his career working for The Black River Tribune, a small newspaper in Ludlow, Vermont. He was an early producer for Vermont Public Radio.

Lamont then entered the cable television industry, managing the startup of Cablevision's operation in Fairfield County, Connecticut. In 1984, he founded, and is currently president and chairman of, Lamont Digital Systems, a builder and operator of advanced telecommunications networks for college campuses and residential gated communities, with over 150,000 subscribers. The company's finances are private, though it currently has 35 employees, down from 100 in 2001. His most recent salary was reported as $546,000 per year.

Before running for the U.S. Senate, Lamont was elected and served as selectman in the town of Greenwich, Connecticut, for eight years (two terms), chaired the state investment advisory council, and served on many civic boards. Lamont unsuccessfully ran for a state Senate seat in 1990, finishing in third place.

Lamont and his wife, the former Ann "Annie" Greenlee Huntress, a venture capitalist, have three teenaged children.Ann Lamont seconded her husband's nomination at the Connecticut Democratic Convention in May 2006.

Lamont is the great-grandson of former J.P. Morgan & Co. Chairman Thomas W. Lamont and the grandnephew (not the grandson, as has been widely reported) of Corliss Lamont (a director of the American Civil Liberties Union from 1932 to 1954). His self-reported net worth lies somewhere between $90 million and $300 million.

His father, Ted (Edward M. Sr.), was an economist who worked with the Marshall Plan which helped reconstruct Europe after World War II. He later served in the Nixon administration in Housing and Urban Development. Ted Lamont is now an unaffiliated voter, having last voted for a Republican in 1988. Since then he has voted Democratic. He told The Hartford Courant that "Eastern Moderates no longer have a place in the GOP." Ned Lamont contributed to one Republican as late as 1998, when he contributed $500 to the re-election effort of Congressman Chris Shays, but since 1999 has contributed over $57,000 to Democrats, including $1,500 to Joe Lieberman.

His mother, Camille Buzby "Buz" Lamont, was born in Puerto Rico, the daughter of an American salesman (a Quaker veteran of World War I) and a Catholic missionary. She is of French and U.S. descent and she studied at the George School in Pennsylvania, Middlebury College in Vermont, and at the University of Geneva in Switzerland. She speaks fluent Spanish but never taught Ned.

It was reported that as of September 11 Lamont had spent another $1.5 million of his own money on the campaign, with two months yet to go.

Lamont continued to pour personal funds into the campaign during September, with reports indicating his total contributions now exceed $12.7 million.

Also, Lamont pledged not to take money from lobbyists.

Lamont's campaign manager, Tom Swan, was, however, a registered lobbyist with the state of Connecticut. In early 2006, Lamont received the backing of former independent Connecticut Governor and Republican U.S. Senator Lowell Weicker, who was unseated by Lieberman in 1988.

Lamont eventually portrayed himself as an anti-war candidate calling for an immediate withdrawal of U.S. forces from Iraq, in contrast to Lieberman, who supports the continued presence of U.S. troops in Iraq and advocated for a troop increase proposed by then-President George W. Bush.

His campaign was partially supported by anti-war activists who oppose the Iraq war and are calling for an immediate withdrawal from Iraq, including MoveOn.org, which donated $251,156 from its contributors to the campaign.

On July 6, 2006, Lamont faced off against Lieberman in a 51-minute televised debate which covered issues ranging from the war in Iraq to energy policy to immigration.

Lieberman argued that he was being subjected to a "litmus test" on the war, insisted that he was a "bread and butter Democrat" and on a number of occasions asked, "Who is Ned Lamont?" Lieberman asked Lamont if he would disclose his income tax returns.

After the debate, Lamont did release his 2005 tax return and financial details about prior years. Lamont focused on Lieberman's supportive relationship with Republicans ("...if you won't challenge President Bush and his failed agenda, I will") and criticized his vote for the "Bush/Cheney/Lieberman energy bill."

Lieberman stated, in response to Lamont's assertion that he supported Republican policies, that he had voted with the Democratic caucus in the Senate 90% of the time. However, Lamont argued that the then three-term incumbent lacked the courage to challenge the Bush administration's handling of the Iraq War.

Lamont began as a "dark-horse" candidate, but was at a statistical dead heat with Lieberman in July, and went on to win the primary in August. Polls taken prior to the primary vote showed Lieberman, if running as an independent, polling better among Republicans and independents in a three-way race, including Republican candidate Alan Schlesinger, who greatly trailed both Lamont and Lieberman. Early August polls, however, showed Lamont increasing his lead significantly[35], and many speculate on the effect of the primary outcome (and expected high Democratic endorsement) on the general election. The initial post primary poll showed Lieberman holding a narrow lead in a general election, however.

On July 30, 2006, the London Sunday Times reported that former president Bill Clinton is believed to have warned Lieberman not to run as an independent if he lost the primary to Lamont. Many Democratic leaders pledged to support the winner of the Connecticut Democratic primary. Most Democratic leaders, however, supported Lieberman's campaign for the Democratic nomination, and some, including Senate Minority Leader Harry Reid, allegedly asked Lamont not to run.

Lamont resigned his membership in a Greenwich country club shortly before his campaign began, as the club was "too white and too rich and he did not want it to become a campaign issue." It became an issue, however, following the release of a flier from the Lieberman campaign questioning Lamont's record on race.

Lamont criticized Wal-Mart during the campaign and lambasted Lieberman for previously receiving campaign contributions from Wal-Mart, which he later returned.

Their Wal-Mart holdings spin off as much as $3,500 in annual dividends. In addition, a trust fund he set up for one of his children contains as much as $15,000 in Wal-Mart stock and spins off as much as $1,000 in dividends." Time magazine reported on August 4, 2006, that Lamont's campaign manager,

Tom Swan, said the candidate was not actively controlling the investment. "He does not own any stock directly, it's not a direct holding," he said. Part of the Wal-Mart stock is held in a Goldman Sachs "Tax Advantaged Core Strategies managed account", according to a letter released by Swan. He said the account is designed to track the S+P 500 index, and that Goldman Sachs makes the investment decisions for the account."

On August 21, Lamont distanced himself from the demands of some supporters that Joe Lieberman be purged from the Democratic voter rolls.

Hartford Courant: Out of the Political Shadows. Mark Pazniokas.

TIME: An Embarrassment of Riches for Lieberman's Challenger. Massimo Calabresi.