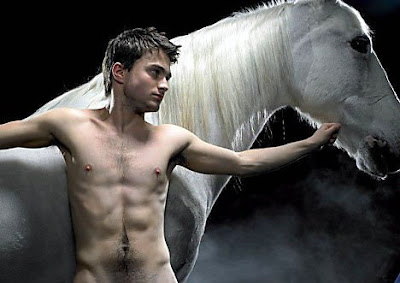 Radcliffe eyeing musical performances
RedOrbit
British actor Daniel Radcliffe, star of the Harry Potter films, says he would like to perform in musicals after a recent New York performance.
The Daily Telegraph (Britain) said Thursday that after making his on-stage singing debut at the New York charity gala, Broadway Cares, the 19-year-old actor said he would like to see additional singing roles in his future.
The actor, who plays the title role in the successful Harry Potter films, performed at the charity gala as part of his touring role with the Equus theater production.
The play includes several actors dressed as horses and Radcliffe performing the song, The Love That Dare Not Speak Its Neigh, which he personally wrote for the production.
The Telegraph said the cast of the production, which includes an on-stage partial nude scene by Radcliffe, traveled to Greenwich, Conn., to visit stables in preparation for their equestrian stage roles.
PLEASE SEE:
12/29/08 The "Equus" horses went to Greenwich for a day to visit a horse farm owned by one of the show's producers and Radcliffe manages to keep his pants on