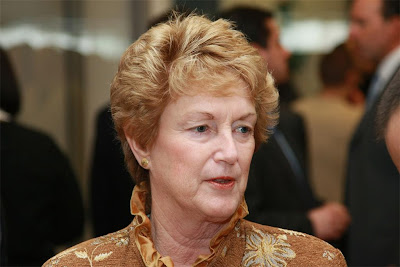 Conn. governor decides not to seek another term

Connecticut Gov. M. Jodi Rell says she will not seek re-election next year.

She made the announcement in a news conference Monday at the statehouse in Hartford.

Rell has been governor since 2004, when John Rowland resigned in a corruption probe. In 2006 voters made her the first Republican woman elected to the post.

PLEASE SEE:
11/05/09 The Greenwich Time Is Always A Day Late And A Dollar Short When It Comes To Reporting The News
11/04/09 If You Want To Know What's Going On In Greenwich, Then You Have To Read The Out Of Town Newspapers
Democrat Ned Lamont Exploring A Run For Governor In 2010

UPDATE:
Five Hours Later The Greenwich Time Runs A CT Post Story
Rell bombshell: She won't run again
By Ken Dixon
CT POST STAFF WRITER
Posted: 11/09/2009 08:51:04 PM EST
HARTFORD Â­ tearful Gov. M. Jodi Rell abruptly announced Monday she will not run for re-election, bringing to an end a 25-year political career that saw her rise from an obscure small-town politician to a figure credited with restoring faith in a scandal-scarred office.
In a stunning announcement during a hastily called news conference in her office, Rell said.....
.....her predecessor and former running mate John G. Rowland, resigned under the shadow of an impeachment investigation in July 2004. He eventually pleaded guilty to federal corruption charges.
Rell served 10 years in the state House of Representatives, representing her hometown of Brookfield, before becoming Rowland's running mate in 1994. For nine-and-a-half years, she ......

....."I met today with our budget chief and our sales-tax revenue continues to decline," Rell said during a brief question-and-answer period in her Capitol office after her announcement. "That's why I need to focus, right now, my attention on getting our budget in balance and dealing with the Legislature." Rell said that she's sure Republicans can hold the Governor's Residence after she retires. Right after her news conference, Lt. Gov. Michael Fedele, of Stamford, told reporters in the hall outside Rell's office that he expects to be a candidate and anticipates Rell's support.
"This is something that we've all been expecting," Fedele said.....
.....On the Democratic side, James A. Amann of Milford, former speaker of the House, is the only officially announced candidate for the party's gubernatorial nomination. But several Democrats have filed exploratory committees: Stamford Mayor Dannel P. Malloy; Secretary of the State Susan Bysiewicz; Ridgefield First Selectman Rudolph P. Marconi; state Sen. Gary LeBeau of East Hartford; and Ned Lamont, who won the 2006 Democratic primary against U.S. Sen. Joe Lieberman.
On the Republican side, House Minority Leader Lawrence F. Cafero Jr., R-Norwalk, is exploring a candidacy.....
LOOK AT ALL OF THE
OUT OF TOWN NEWS SOURCES
THAT BEAT THE GREENWICH TIME
CT-Gov: Rell Won't Run Again
Washington Post - ‎3 hours ago‎
Jodi Rell (R) won't run for re-election in 2010. Photo by Neilson Barnard/Getty Images for 20th Century Fox Connecticut Gov. Jodi Rell (R) has decided ...
Nov. 9 (Bloomberg) -- Jodi Rell, the second woman elected governor in ...
Bloomberg
Connecticut Governor Won't Seek Re-election
New York Times
Conn. Gov. Rell will not seek re-election
NECN
Politico
Gather.com
Read all 111 news articles that were up online before the Greenwich Time posted the CT Post article by Bridgeport's political columnist Ken Dixon
===================================
Please send your comments, news tips and press releases to GreenwichRoundup@gmail.com
Posted by Greenwich Roundup at 11/09/2009 03:59:00 PM No comments: Links to this post

MTV is reality for Colonial
The GW Hatchet
... two worlds entirely different. There's a Whitney and there's a Whitney on The City." Fackelmayer, who grew up in Greenwich, Conn. and knew a couple of the cast members before filming began, went into filming prepared but said he still felt he was ...

Stephanie Seymoura s Full Disclosure
James Wolcott
... back in 1995, when they tied the knot in Paris and then settled into a comfortable life that included homes in Greenwich, Connecticut, the Hamptons, and Palm Beach. She was 26, he 48. "He's strong, intelligent, sensitive, and very masculine," she ...

People & Places
Connecticut Post
Chip Skowron to its board of directors. Skowron, a Greenwich resident, is a managing director at Morgan Stanley.

Please send your comments, news tips and press releases to GreenwichRoundup@gmail.com
Posted by Greenwich Roundup at 11/09/2009 02:22:00 PM No comments: Links to this post