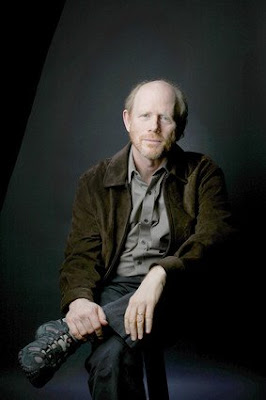 RON HOWARD says it's no accident he lives in Connecticut, not California. For his kids, all grown, his Greenwich home "has really become this great gathering place for the holidays and again in the summer or around Easter," he says.
(JAY L. CLENDENIN / LOS ANGELES TIMES)
Ron Howard loves living in Greenwich for many reasons. Perhaps the biggest reason is that Greenwich isn't Los Angeles.

"We wanted to raise our kids beyond the magnetism of Hollywood as a state of mind or a way of life," Howard says. Who needs a ZIP code that begins with a "9" anyway?

Howard won an Oscar for directing "A Beautiful Mind" (2001) and shepherded "The Da Vinci Code" (2006) to box office heaven. Now he has the Oscar-hyped " Frost/Nixon," about the 1977 interviews between Watergate-disgraced President Richard Nixon ( Frank Langella) and the unctuous chat host David Frost ( Michael Sheen), opening Christmas Day in Connecticut. Then comes the May release of " Angels and Demons," the "Code" sequel, with Tom Hanks reprising his role as Robert Langdon.

Whether Howard's projects are Academy catnip or popcorn for the masses, Greenwich always plays a supporting role. "Spending as much time on the East Coast as possible is artistically stimulating," Howard, 54, says in an interview at a Central Park hotel in New York City. "It stimulates ideas that are not born out of the industrial side of the film world."

Greenwich is also a place devoid of a certain pecking order. "In Los Angeles, you can feel an indexing of people's viability and clout," he says. "It's present when you walk into a meeting or restaurant or screening or movie. You don't feel that as much here."

Plus it's a safe haven to finish a film away from prying industry eyes.

Howard has long used a small building in Greenwich to edit his projects. "It's great to take it there and discover what the movie really is," he says.....

....While he was shooting the 1984 mermaid comedy "Splash" in New York City, its star, Daryl Hannah, suggested Howard check out the Connecticut suburbs. The Howards fell for Greenwich. Their brood eventually grew to four, all of whom are now in their 20s: " Spider-Man 3" actress Bryce, the twins Jocelyn and Paige, and son Reed.

"Our house has really become this great gathering place for the holidays and again in the summer or around Easter," Howard says.

"It's a place the kids want to go back to and reconnect. So the family home really carries a lot of importance to them still, and that means a lot to me."

"Bryce's wedding was there," he adds. "I think it's going to remain an important aspect of our lives for many years."

One of these days, he might even shoot a movie in Connecticut. .....

.....His favorite restaurant in Greenwich at the moment is a "fairly new" wine bar on Greenwich Avenue, across the street from Richards Clothing.

He conveniently forgets the name."It's street-level," he says. "You can have a glass of wine and have a nice meal and watch the people moving around Greenwich Avenue. We love that place.

"Posh country living suits Howard. Just don't count on him to advertise it to his show-biz brethren."I'm a really good spokesperson whenever somebody brings it up," he says.

"But I'm not sure I want the Hollywood film community to come to Greenwich." 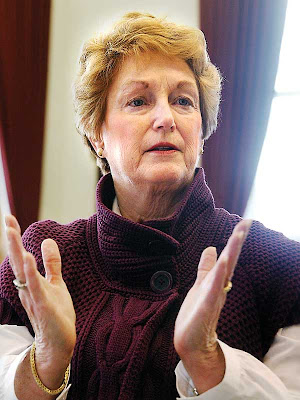 Connecticut Governor M.Jodi Rell answers questions about how she is handling the budget crisis in her office at the Capital.
(Phil Noel/Hearst Newspaper Staff photo)
Two of a kind: Rell tackles problems in both budgets
HARTFORD - By the time Gov. M. Jodi Rell finished her latest deficit-reduction plan last week, she was enmeshed in budget numbers and having trouble sleeping.
Full Story
Greenwich employees warned over gifts
It's the season of giving, but town employees are under strict instructions not to accept anything of value during the holiday season and throughout the year.
Full Story

Greenwich officials look to make up $100M
If only the town of Greenwich could write a check for $100 million - la the New York Yankees. Officials say it could take an infusion of close to that amount of money or perhaps even more to make the town's pension fund whole again after several months of staggering losses.
Full Story
Greenwich lawyer returns to work after probation
After a year spent barred from practicing law, Greenwich Attorney Philip Russell is back in the game and looking straight ahead.
Full Story