FB Meyers chooses Princeton over football powers
SI.com - USA
The Greenwich (Conn.) High fullback/linebacker knew the choice would be difficult. And after taking an official visit to Florida in November, ...

Blue Sky Studios Plans To Relocate To Greenwich
Hartford Courant
Blue Sky Studios, Inc., which has an estimated 300 employees, is moving to Greenwich after an extensive search in the New York metro area, House Speaker ...

To Go To The Greenwich Roundup Homepage Click Here .

Friends Friday Films - Water
Where: Greenwich Library at Cole Auditorium WATER (2006-India) Directed by Deepa Mehta. With Sarala, Lisa Ray, Seema Biswas. When her father tells 8-year-old Chula her husband has died, under Hindu law she will be a widow for the rest ...
Greenwich Library Today's Events - http://www.greenwichlibrary.org 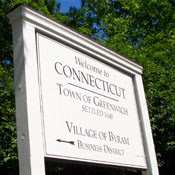 By Martin B. Cassidy
Stamford Advocate

Recent crimes ranging from a home invasion on Byram Road, to a wave of 26 car break-ins in Byram this spring and a spate of gang-related graffiti from December to May of this year have prompted concerns about safety, Byram Neighborhood Association President Michael Bocchino said.
The tires slashed on more than two dozen cars on South Water Street overnight last Saturday reflects a fearless attitude among vandals and criminals visiting or living in Byram, Bocchino said.
'We're hopeful the town realizes that the communities need more police presence,' Bocchino said. 'I'm damn well sure this western end of town is in need of some more police presence, whether it be Byram, Glenville, Pemberwick, Chickahominy, or wherever.' ....

'I don't go up to the other end of South Water Street now because of all the roughnecks,' Lawrence M. Finnigan, a resident of South Water Street said. 'In some ways Byram is becoming like Bridgeport with all the roughnecks.'
One of the tire slashing victims, Omar Silva, also a South Water Street resident, said the act has raised his concerns about how safe the area is.
'Until this weekend I wasn't worried, but now I am more concerned about it,' Silva said.
Finnigan said an extra patrol car passing through Byram on an hourly basis would probably help curb nighttime vandalism and problems with youth.
'It wouldn't hurt to have a patrol car coming through more often,' Finnigan said. 'Sometimes all you have to do is swing by.'
Ideally residents would like to see police create a substation at the Byram Volunteer Fire Department on Delavan Avenue to respond to calls, Bocchino said.

.....Despite the apparent gang references in the graffiti and some disruptive and wayward teens in downtown Byram on weekend nights, police feel juvenile problems in the area are not the result of gang activity, Ridberg said.
'There were some indications that the graffiti was gang-related and as far back as two years ago we started doing gang intelligence in Byram,' Ridberg said. 'We were aggressive in trying to crack down on social problems down there, and we don't think it's the result of gangs.'
Bocchino said the Byram Neighborhood Association plans to put the question about safety in Byram to candidates for the Board of Selectmen in an upcoming debate.
'It's definitely something which we will bring to the candidates in the upcoming election,' Bocchino said. 'People are angry and frustrated and want action.'
Now Just 93 Days Later Byram Neighborhood Association President Mike "The Flip Flopper" Bocchino has changed his tune and sold out the residents of Byram.

Today in The Greenwich Time Mike "The Flip Flopper" Says....

"As for the Greenwich Police Department, I personally and publicly thank Chief David Ridberg and his officers, especially Sgt. Mike Reynolds, Officers Keith Hirsch, Antonio Rivera and Robert McKiernan, and Detective Mark Zuccerella, for all of their outstanding work in the Byram community and the entire town of Greenwich.

Let's face facts: The world is changing and things are not as they once were. As the population around us grows and with our proximity to New York, our town will unfortunately continue to see its share of vandalism and crime, like it or not"

In the last 93 days Byram has had even more vandalism and gang graffiti.

Worse yet, Byram residents have been mugged near Johnny Cakes.

Byram is going down the tubes, because we have leaders like Mike "the flip flopper" Bocchino.

Mike "The Flip Flopper" Bocchino has forgotten all about his show boating for the Greenwich time calling for more police patrols and a police substation in Byram.

"As the population around us grows and with our proximity to New York, our town will unfortunately continue to see its share of vandalism and crime, like it or not. "
- Mike "The Flip Flopper" Bocchino
January 10 th.
Posted by Greenwich Roundup at 1/11/2008 06:35:00 AM No comments: Links to this post

Quantitative Software Engineer Unix C++ or Java, IJC Partners ...
Tip Tier Electronic Trading Firm in Greenwich,Ct is looking for a very bright and talented programmer who wants to work on robust Trading systems. This individual will have a strong Programming background with C++ on a Unix platform and ...
Jobs for PhDs - http://jobs.phds.org

Send Your Help Wanted Ads To GreenwichRoundup@blogspot.com and we will post them for free.

There was a nice sounding lady that said my wife's store did not have the proper paperwork for a sign in her window.

The facts are that Greenwich Police Officer DiPretro and three other officers came to my wives store and stayed about an hour just before I was getting to call the Greenwich Matters show hosted by Sam Romeo on WGCH. I had posted on this blog that I intended to complain about the poor performance of the police in Byram.

Police Officer DiPietro made some comments that indicated that his and the other officers presence was in retaliation, because I had exercised my right to Free Speech on this blog and was going to reiterate my complaints about Byram Police Officers on the Radio.
Officer DiPretro illegally searched non-public backrooms of the store and I had to call 911 three times to end the illegal search and get Officer Dipretro out of my wife's store.
Later, Officer DiPretro angrily began writing up a ticket for my wives store. A Greenwich Police Sargent Moran ordered DiPretro to withdraw the ticket.
The out of control Officer Dipretro argued with Sargent Moran about the ticket.
And I would just like to mention that it is only alleged that my wife needed this paper work or did not have this paper work. Actually, it is very hard to respond to the allegation, because my has not been charged with anything or issued any ticket at all.
Moreover, what Greenwich Police Officials are failing to mention is that my wife has three letters from Greenwich Town Officials giving her permission for the signage.
What happened in my wife's store on December 27th was not about a sign. It was about trying to intimidate and silence a Greenwich Police Department Critic.

Because Officer DiPretro, wrote a ticket and left.

However, on December 27th, Officer DiPretro did not come in the store with a bunch of police officers and conduct an illegal search just before I was going to go on WGCH and complain about him.
This is why for two weeks I have tried to meet with First Selectman Peter Tesei to explain these facts and to get rid of malicious police rumors spread about my dear wife and I.
Like the false, malicious, libelous, Slanderous and untrue lie that I am not a resident of Greenwich and do not live in RTM District 4.
The facts are that I live in a residential unit that has a nonconforming use exemption. The unit is in a residential building in a residential zone of Greenwich.

My tenancy is month to month and the CL&P Bill and other utility bills are addressed to Apartment 1 Front. The CL&P Bill has came that was for over 30 years, I am told.
The former owner of the building lived in the space and operated a business long before any current zoning regulations applied to the property.
Moreover, If there is a question about the certificate of occupancy (CO) there is nothing I can do about it. Only the landlord can apply for or fix the CO. The tenant has no say in the buildings CO what-so-ever.
Now the Town Of Greenwich has two options.
Number one, they can arbitrarily throw me in the street and Connecticut State law says the Town must find me housing in Town and this will expose the Town Of Greenwich to a civil suit from my wife and I.
Number two, the Town can cite my Landlord and let an independent housing court judge decide if the Town is right or if my landlord is right. If my landlord is wrong then the housing court judge will come to a fair and equitable solution between my landlord and I. The judge might tell me leave in 24 hours or 24 days. Who Knows?
If the housing judge says my landlord is right, then the Town Of Greenwich would have the right to appeal the judges ruling.
Solution number two is the most fair, because it puts any decision in the hands of an independent judge in Norwalk who will not be pressured by local politics or the police department.
No one is going to be stupid enough to tell the judge if this Byram Legislator does not resign his seat, we are going to retaliate against him and his landlord.
Posted by Greenwich Roundup at 1/11/2008 12:39:00 AM No comments: Links to this post