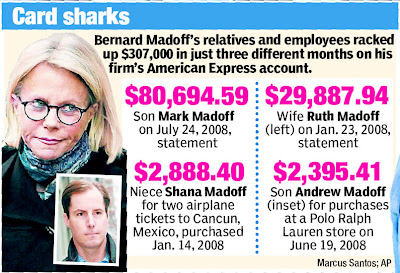 It Was Party Time On The Investor's Dime !!!!

Greenwich Resident Mark Madoff Picked Up Expensive Trinkets And Stuck Swindled Investors With With The Tab.

Why Hasn't Mark Madoff Been Taken From His Posh Greenwich Home And Placed In Jail With His Father?

Bernard Madoff used firm funds to pay expenses for his family and workers, according to court documents.

Greenwich Resident Andrew Madoff Also Got In On The Party And Raided Investor's Money, By Racking Up Some Credit Card Bills

Will Andrew Madoff Rat Out Both Bernie And Mark In Order To Save His Own Skin?

BY CHRISTOPHER SCINTA AND DAVID GLOVIN

'He essentially used BLMIS as his `personal piggy bank,' having BLMIS pay for his lavish lifestyle and that of his family,'' David Sheehan, a lawyer for Picard, wrote in a legal brief filed in U.S. Bankruptcy Court in New York. ``Madoff used BLMIS to siphon funds which were, in reality, other people's money, for his personal use and the benefit of his inner circle. Plain and simple, he stole it.''

The filing is part of a request by Picard to consolidate the bankruptcy proceedings of the business with the bankruptcy of Madoff's estate. Picard cited Madoff's expenses as a basis to join the cases, saying spending by Madoff and his business were so entangled that they can't be unraveled.

Picard also said he's seeking the return of ''billions of dollars'' from so-called feeder funds that funneled money to Madoff. Last month, he told 223 other investors to return as much as $735 million or face legal action. He has already launched three cases seeking to reverse transfer of funds out of Madoff firm accounts, he said.

According to the filing, Madoff Securities loaned $9 million to Madoff's brother, Peter; gave $5.5 million to Madoff Technologies, in which family members owned a majority stake; and provided a $1.7 million capital contribution to Madoff Energy Holdings, which was owned by his sons, Mark and Andrew, and niece Shana.

Madoff also placed on the payroll of Madoff Securities several individuals ''for whom there was no evidence that they worked'' at the firm, Michael Slattery, a Picard investigator, wrote in an affidavit that was part of the court filing.

Madoff, 71, pleaded guilty March 12 to fraud by using money from new investors to pay off old ones in the largest Ponzi scheme in U.S. history. Before his Dec. 11 arrest, he had told his thousands of clients that they had about $65 billion in accounts with him, prosecutors said. He faces a prison sentence of as many as 150 years.

Picard, a lawyer with Baker & Hostetler in New York, has recovered about $1 billion for investors in Madoff's money-management business.

Madoff Securities had two primary bank accounts, one at Bank of New York Mellon Corp. and one at JPMorgan Chase & Co., Slattery said. The Bank of New York account was the firm's primary cash account to fund operating and other expenses. The JPMorgan account held Madoff customer deposits, he said.

But There Is More:

Talk about living high on the hog!

Purchases ranged from big-ticket items, like the $2,000 dropped by his wife, Ruth, at the Giorgio Armani store in Paris, down to the $8.11 niece Shana Madoff spent on Starbucks coffee.

Son Mark Madoff racked up nearly $81,000 in charges on the July 24, 2008, statement, with more than $77,000 for charter flights from the Tradewind Aviation service in Oxford, Conn.

The statements, filed in US Bankruptcy Court in Manhattan, cover three months last year, but total more than $307,000.

The statements list dozens of charges at snazzy eateries like Balthazar in SoHo and Citarella in East Hampton.

Shana Madoff, meanwhile, was a big fan of the now-shuttered Uncle Marky's Organic restaurant on East 53rd Street, where she signed for multiple meals.

Madoff bankruptcy trustee Irving Picard filed the AmEx statements to help show how the swindler used his securities firm as a "personal piggy bank" to fund his "decadent" lifestyle and shower his family and friends with cash.

The papers also detail a $9 million loan to Madoff's brother, Peter, and cash transfers to pay for a $4.3 million Manhattan apartment for Andrew; a $6.5 million Nantucket home for Mark and his wife, Stephanie; and a $2.2 million home in Mantoloking, NJ, for JoAnn Crupi, a longtime worker at Madoff's crooked "investment advisory" business.

Sister-in-law Marion Madoff got an annual salary of $163,500 last year, although there is "no evidence" she did any work for the company, the papers say.

Also on the company's payroll were Madoff's housekeepers in New York and Florida, and boat captains for both himself and company Chief Financial Officer Frank DiPascali, who's reportedly seeking a deal with the feds.

There were also nearly $1 million in corporate payments to three Florida clubs -- Trump International Golf Club, the Breakers and Palm Beach Country Club -- as well as the Atlantic Golf Club in Bridgehampton, on behalf of Bernard and Peter Madoff and their wives.

Also at the Manhattan Bankruptcy Court hearing, it was revealed Peter Madoff has agreed to surrender a $235,000 vintage Aston-Martin bought by his brother's London-based securities firm.