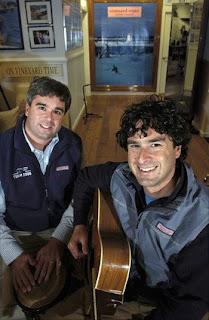 "Everybody wanted us to take sides," Shep Murray, 37, recalled in a recent interview at the Vineyard Vines store in Greenwich, the town where the brothers grew up and still live.

GREENWICH — - Shep and Ian Murray have never run for president, but men wearing their neckties have, which has been very good for business.

During the 2004 presidential campaign, , and Howard Dean all sported ties made by Vineyard Vines, the Murrays' Stamford-based apparel company that has its spiritual home on Martha's Vineyard, the resort island off Cape Cod that the brothers consider a home away from home.

(who spent many presidential summers on the Vineyard), (who frequents Nantucket, as does Kerry) and have all been spotted in Vineyard Vines, too....

... (For the record, Shep is registered as a Democrat and Ian is unaffiliated, according to Greenwich public records.)

The unsolicited political endorsements led to a flurry of publicity, exposing Vineyard Vines' playful, preppy brand to the nation's farthest reaches. Last year, sales were "well over $50 million," up more than 100 percent in two years, according to Shep, the elder of the brothers.

Initially their company's only employees, the Murrays now oversee a staff of about 120 and a ballooning product line that includes shirts, shorts, skirts, belts, boxer shorts, totes, jackets — just about anything they and their friends might need, should their luggage ever get lost on the way to Key Largo...

3rd man admits to role in jewelry store robbery
Newsday - Long Island,NY
A third man has admitted to participating in a multimillion dollar robbery of a Greenwich jewelry store by helping his brother set fire to a stolen truck to ...

Stamford's $23.9 billion in assessed value of all taxable property is second only to Greenwich's $33.8 billion. ...

Bitter rivals play for hockey crown
Stamford Advocate - Stamford,CT
The top-seeded Blue Wave (17-5) have reeled off seven straight victories since losing to Greenwich on Feb. 2. Darien, which finished 10-2 in the conference, ...

If you have to ask, you probably can't afford it
That's a big price tag, even for Greenwich, an affluent New York suburb sometimes dubbed the hedge-fund capital of the world, and it would be among the highest prices ever asked for a Northeast home. The listing agent, David Ogilvy of ...
RealTown: News - http://www.realtown.com

Please send comments to GreenwichRoundup@gmail.com
Posted by Greenwich Roundup at 3/02/2008 05:03:00 PM No comments: 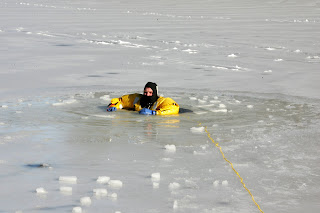 Joe Gianfrancesco, a four-year veteran of the Sound Beach Volunteer Fire Department, is playing the role of a victim during a cold-water rescue training exercise at Mianus Pond on Sunday.
(GREENWICH CITIZEN photo / Felix Andreoni)

By Anne W. Semmes Of The Greenwich Citizen

It's a cold and snowy day and ice covers the nearby waterway, but the family dog sees a goose and takes off in hot pursuit across the ice. Suddenly the ice gives away and "Rover" is in the freezing water, struggling to get a grip on the ice. The owner, hearing the dog's plaintive yelps, starts out tentatively across the ice to lend a hand, but suddenly the ice cracks and the individual falls in as well.

It was for just such a scenario that some 50 volunteer firefighters throughout Greenwich gathered last Sunday morning by the iced-over Mianus Pond, off Loading Dock Road in Riverside, for their annual cold-water rescue training....

Out of the Mouth of Babes
The Board of Selectmen, swayed Monday by mighty oratory from eighth-grader Matthew Van Rhyn of Eastern Middle School, unanimously voted to adopt a resolution to make Greenwich a "Clean Energy Community.

Just after a snowfall, battling the biting December wind, Edward Parker, 18, had to complete a grueling two-mile run to qualify for the U.S. Army Reserve.

After completing the first mile, in his military-issued uniform and 5-pound winter boots, his whole body hurt and his face stung from the cold.

"I really thought, 'I want to give up. Forget this", he said.

But then he asked himself, "Am I going to do this in a life-or-death situation if it depends on saving other people? No, I have to continue.' It's about telling yourself you're not in pain," he recalled during an interview last week....

...He said that people often ask him why he joined up, especially now with the war going on, and he is surprised by that reaction.

Although it can be seen as a dangerous career choice, there can be risks in many jobs.

He said his biggest fear is being away from home, family and friends -- not fighting in the war in Iraq.

"What's the point of joining the military if you refuse to do your job?" he said, "There is a part of me that wants to go. My unit has been to Iraq twice already and I haven't heard any complaints. Their stories make it sound like a good life experience."

Beach-access concerns delay national listing
With fears mounting that the town might have to relinquish its control of beach-access at the site, a bid to have Point Park placed on the National Register of Historic Places has been suspended.

Man pleads guilty to part in jewelry heist
A Bridgeport man has pleaded guilty to setting a fire with his brother to aid in the robbery of Betteridge Jewelers in September 2006, in which a gun-toting motorcyclist dropped near $5 million in jewels as he tried to escape.

Tobacco sting nets clerk
Police cited a liquor store clerk for selling tobacco to minors during a spot compliance check of 24 businesses in town Thursday, according to police.
Posted by Greenwich Roundup at 3/02/2008 03:32:00 PM No comments:

03/02/08 - Another Administrative Screw Up - "They let it happen again. Shame on them. They should be fired," said Laura Dibella past PTA president. 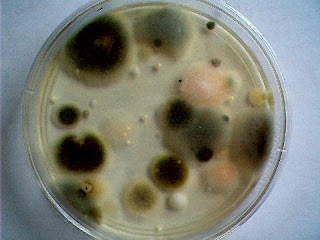 Your Tax Dollars NOT At Work
Parents Are Infuriated And Outraged

Hamilton Avenue School will close for a week starting tomorrow, and relocate completely for the rest of the school year, because of mold found inside the walls of the temporary classrooms the school occupies at Western Middle School....

... The Hamilton Avenue School students and staff will be relocated for the remainder of the school year, a statement released by the schools yesterday states, but it isn't known where yet...

... The school has been operating in the temporary buildings for 31Ú2 years -- what was supposed to be 18 months -- while its old Chickahominy building is rebuilt because of its mold problems. The construction project has had numerous setbacks and is now well behind schedule. The most recent addition to the delays was just announced at Thursday night's Board of Education meeting....

...The temporary classrooms have had problems with water pooling and snow piling up on their flat roofs, Sue Wallerstein, assistant superintendent for business services said Friday....

...a special Board of Education meeting has been called for 7 p.m. tomorrow night at a location still to be determined, at which the public will be allowed to comment and ask questions.

The problems with mold usually stem from the symptoms and health effects resulting from indoor mold exposure. There is public awareness that exposure to mold can cause adverse health effects, symptoms, and possible allergic reactions. Health professionals are often tasked with the investigation and/or assessment of these health effects on employees and/or the public.

The most common form of hypersensitivity is caused by the direct exposure to inhaled mold spores that can be dead or alive or hyphal fragments which can lead to allergic asthma or allergic rhinitis. The most common effects are Rhinorrhea (runny nose), watery eyes, coughing and asthma attacks. Another form of hypersensitivity is hypersensitivity pneumonitis (HP). This is usually the direct result of inhaled large spores or fragments in an occupational setting. About 5% of individuals are predicted to have some allergic airway symptoms from molds over their lifetime.

Toxic effects from mold are produced by exposure to the mycotoxins of some mold species, such as Stachybotrys chartarum (S. chartarum). These are often referred to as “Toxic molds” These toxic molds are often implicated as a potential cause of Sick Building Syndrome.
Posted by Greenwich Roundup at 3/02/2008 03:02:00 PM No comments: