GHS math team is pumped up and ready to go
Pop quiz: What is the volume of a block of wood measuring two inches high, four inches wide and eight inches long, with four cylindrical, inch-wide holes drilled through its sides. Read More »

FBI deciding which portions of Smith documents to sealThe release of court records concerning George A. Smith IV, a Greenwich man who vanished while on his honeymoon cruise in 2005, has been delayed as the FBI determines which portions to seal from the Read More »

Fierce talk: Fashion superstar Christian Siriano on how to emulate runway styleChristian V. Siriano, the diminutive young talent who catwalked his way into fame with a star-making turn as the Season Four winner of "Project Runway," is known for his impeccable designs and Read More »
In town
Temple hosts Mitzvah Day Temple Sholom, 300 E. Putnam Ave., will host its annual Mitzvah Day, a hands-on opportunity to do good deeds for the town's less fortunate, from 9 a. Read More »

Push on to raise state's dropout ageHARTFORD -- A bill that would prevent children from dropping out of school until age 18 has been resurrected in the General Assembly, but its estimated additional costs for school systems might Read More »
===================================
Please send your comments, news tips and press releases to GreenwichRoundup@gmail.com
Posted by Greenwich Roundup at 4/30/2009 07:45:00 PM No comments: Links to this post

Someone has Updated The Greenwich Wikipedia Page And Wants Verification Of Some Of The Facts:

Please send your comments, news tips and press releases to GreenwichRoundup@gmail.com
Posted by Greenwich Roundup at 4/30/2009 07:32:00 PM No comments: Links to this post 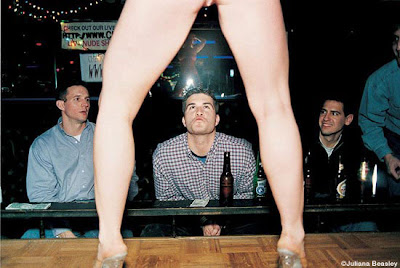 Former Wall Street workers turn to racier businesses to keep up a cushy lifestyle
They were earning six figures, and now some have lost their shirts — literally.
When Wall Street went bust, certain white-collar professionals who had been making top pay in the financial services industries ditched their pride and found work in strip clubs, phone sex companies and other salacious enterprises in order to maintain their standard of living. .....
.......A former stockbroker at one of the government-bailed-out brokerage houses, claims she earns up to $1,000 a night in tips alone after less than a year in her new gig.
"I had an empty bank account last year, and so when I was offered a job at a strip club in Manhattan I thought, 'What can I lose?,'" asks the 30-ish Megan (last name withheld). At the time, Megan was already struggling to pay off more than $20,000 in college loans while subsidizing a lifestyle that included a one-bedroom Greenwich condo, a gym membership, regular spa treatments and lots of nights out clubbing — which is how she met a gentlemen's club manager who liked the way Megan danced and asked her if she would ever consider doing it professionally.
"Before I started the job in New York, I did a few drive-bys at strip clubs in this area" — Bridgeport and New Haven — "but they all looked so sleazy," Megan says. "The Manhattan club I work in is high-end, and it's kind of a kick to be dancing for guys who I might have done business with in my former life. It makes me feel powerful, and so does driving the new Beamer I paid for in cash."
Megan works at a club on the Upper East Side that boasts an upscale décor, a champagne lounge, a restaurant with an executive chef, a President's Club and multiple VIP packages — some including a limo. There are celebrities, too, according to Megan, who claims she once gave a private lap dance to a well-known comedian.
"There's no touching allowed by patrons, but if you want to make good tips you have to give them a good show," says Megan, who dances several times per week to maintain the standard of living she nearly lost when Wall Street went bust........
==========================================
Please send your comments, news tips and press releases to GreenwichRoundup@gmail.com
Posted by Greenwich Roundup at 4/30/2009 07:10:00 PM No comments: Links to this post

I delight in your tweaking the nose of the thin-skinned Greenwich Time editor.

Would you be so kind as to add a link to the Greenwich Croquet Club to your "Greenwich Web Sites" section? It's http://greenwichcroquet.com/.

Photo: An underground electrical explosion blew off a manhole at the intersection of East Putnam and Sound Beach avenues Wednesday (Greenwich Time Photo)

Manhole blast disrupts traffic in Old Greenwich
Greenwich Time
Mike Fusaris thought a bomb had gone off under his sport utility vehicle when an explosion rocked the stopped vehicle at a traffic light at the intersection of East Putnam and Sound Beach avenues Wednesday afternoon.
Instead, an underground electrical explosion in a manhole on East Putnam Avenue had blasted the manhole cover against the side of the Orange man's Dodge Durango.
"I thought it was a bomb because there was this big bang and then there was a lot of smoke," said Fusaris, 46, a salesman with a Massachusetts-based food and equipment supply company....
===========================================
Please send your comments, news tips and press releases to GreenwichRoundup@gmail.com
Posted by Greenwich Roundup at 4/30/2009 12:53:00 PM No comments: Links to this post