GREENWICH, Conn. – With Hurricane Irene moving up the coast toward Greenwich, the town is preparing to clear trees that may be downed by the storm.

“We’ll be aggressively prepared and ready to go and hopefully it won’t be as bad as is predicted,” said Bruce Spaman, the town’s tree warden. “We have our own crews on hand and we have private contractors lined up to work with us. We’ll be working with the emergency department to make sure the roads are clear and we’ve organized a plan for clearing off the main roads.”

The Department of Parks and Trees is working closely with the Police Department to notify work crews of fallen trees and branches. An emergency command center has been set up on North Street to identify the location of downed trees and dispatch workmen.

If you’re planning to take down any trees before the storm, it may be too late. “We’re now in emergency mode,” said Spaman. “We’ve had people calling to take down trees, but we need to muster forces for the aftermath.”

MORE NEWS From The Daily Greenwich
Greenwich Band Concert Canceled Due to IreneGREENWICH, Conn. – The Sound Beach Community Band Concert scheduled for Sunday, Aug. 28, has been canceled due to Hurricane...

Metro-North To Shut Down at Noon, Saturday

The Town of Greenwich is calling for an evacuation of all coastal and low lying areas of Greenwich prone to flooding.

This should begin as early as possible as the initial impacts of this storm will be felt around mid afternoon tomorrow running through mid-day Sunday when the Hurricane will have left its mark. 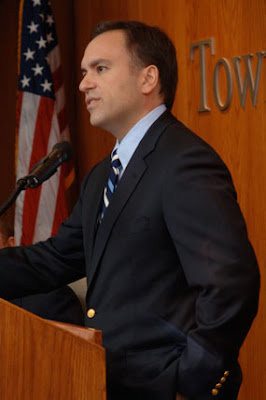 Residents of low-lying areas of Greenwich who have ever experienced flooding are strongly urged to reach higher ground Saturday before the arrival of Hurricane Irene.

Though there are no forced evacuations in place, First Selectman Peter Tesei wants residents in vulnerable areas out of their homes by sunset Saturday.

The announcement came during a press briefing at Town Hall this afternoon, when First Selectman Tesei also said town parking restrictions will be eased as of noon Saturday to allow people to park cars at higher ground.

The storm, threatening to be the first hurricane to make a direct hit on the state in 20 years, was forecast to make landfall in New England on Sunday, although the first bands of rain could lash the region beginning Saturday.

Town and state officials warned it was likely to cause prolonged power outages and flooding in low-lying areas along the shoreline, where residents were rushing to protect property.

The forecasts Friday placed the storm's track through central parts of Connecticut, then north into central Massachusetts, according to the National Weather Service. But Irene could nudge as far west as western Long Island and western Connecticut, or as far east as Rhode Island.

Governor Dannel P. Malloy: "This is perhaps the most serious climate event in state history since 1938."

Governor Malloy, who declared a state of emergency Thursday, urged anyone living in areas that have flooded in the past to seek shelter elsewhere. He said the state was drawing up plans to evacuate low-lying urban areas from Greenwich to New Haven if needed. He said there also were plans to close both the Merritt and Wilbur Cross highways over concerns about the potential for flooding and falling trees.

If the storm hits the state while still at hurricane strength, it would be the first hurricane-level storm to hit Connecticut since Hurricane Gloria in 1985. That storm brought winds of more than 80 mph, causing widespread damage.

In 1999, Hurricane Floyd, though downgraded to tropical storm severity by the time it reached Connecticut created widespread flooding in Greenwich and crippled the town for several days. 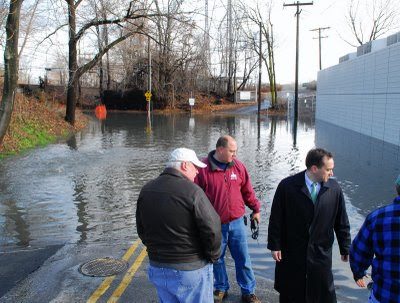 This Just In ..... Gov. Malloy Says Merritt And Wilbur Cross Could Be Ordered Closed

Whether Irene is a hurricane or tropical storm when it reaches Greenwich beginning Saturday, heavy rains and high winds mean it will take a toll on trees and power lines.

Falling trees will bring down power lines and bring power outages that could be days or longer.

The concern about falling trees is so great Governor Dannel P. Malloy said that the Merritt and Wilbur Cross parkways could be ordered closed as of midnight Saturday.

The roads also have low areas that can flood.

First Selectman Peter Tesei has also urged people to be in their homes or safe places by midnight Saturday.

Greenwich officials expect roads block by fallen trees, downed wires or flooding to slow emergency responses and to limit peoples' ability to get around. They are encouraging those who can to ride out the storm at home.

Greenwich DPW crews and utility company crews are readying equipment such as chainsaws to clear roads and begin restoring power.

Connecticut Light & Power warned that outages could last a week or more in some places.

Greenwich is aslso setting up shelters.

The Connecticut National Guard is readying equipment to clear roads and perform rescues in flooded areas.

Two hundred soldiers and airmen are being notified to report for duty Sunday morning, and another 500 could be called up Monday if they are needed.

Guard members already on duty are making sure tools such as chain saws and vehicles are ready to go.

Greenwich residents appear to be paying attention to calls to be prepared for the storm. Store shelves have been cleared of bottled water and D batteries, the most common for flashlights. Generator sales have been brisk too, and most retailers report being out of stock.

In Greenwich most water flow distribution is by gravity. Where pump stations are necessary, the water company has placed generators in case a back-up power supply is needed.

Storm preparations for Metro-North trains are already underway. Normal train service will continue through noon on Saturday, but will begin shutting down in advance of the anticipated arrival of the hurricane.

A hurricane watch means hurricane conditions are possible within 48 hours, and applies to the town of Greenwich and Fairfield county.

A tropical storm watch has been issued for Litchfield, Hartford, Tolland and Windham counties.

The National Weather Service said it's still too soon to make specific predictions about wind and surges, but five to 10 inches of rain is expected in Greenwich.

Governor Dannel P. Malloy, in addition to governors in New Jersey and New York, signed a declaration of emergency Thursday, calling it necessary to help the state react more quickly and effectively in the event of a serious weather event.

Rain from the storm's outer bands will begin to fall on Greenwich Saturday afternoon.

President Obama, speaking from Martha's Vineyard, urged people in the path of the hurricane to prepare.

"I cannot stress this highly enough: If you are in the projected path of this hurricane, you have to take precautions now," said Obama, who is ending his vacation a day early to avoid the storm.

"Don't wait. Don't delay. We all hope for the best, but we have to be prepared for the worst. All of us have to take this storm seriously. You need to listen to your state and local officials, and if you are given an evacuation order, please follow it. Just to underscore this point: We ordered an aircraft carrier group out to sea to avoid this storm yesterday. So if you're in the way of this hurricane, you should be preparing now."

The national association for Amateur Radio, which is headquartered in Newington, will be staffed continuously throughout the weekend aiding and monitoring the responses of ham radio emergency communications groups on the entire East Coast.

Greenwich Roundup is a ham radio operator and will monitor transmissions for news that effect Greenwich.

Gov. Malloy To Speak At Noon Regarding Storm

Gov. Dannel P. Malloy will hold a press conference at noon regarding Hurricane Irene. Watch LIVE on CTnow.com and Fox CT.
Posted by Greenwich Roundup at 8/26/2011 10:38:00 AM No comments:

08/26/11 The Greenwich Topix News Message Board: Western Greenwich Civic Center to Serve as Shelter During Irene And A Map Shows Hurricane Flood Risk

08/26/11 The Countdown Continues At Greenwich CT.com