Photo: Connecticut Republican Candidate Secretary Of State
Jerry Farrell Jr
Even the politically astute of Connecticut have got to be preparing scratch sheets to keep track of who is running for what this political season.
It is a tough job to try and keep track, but it is a job that needs to be done.
People shouldn't complain about their elected representatives if they don't at least cast an educated ballot first.
Do a little homework first. Visit the candidates' websites and study their positions on issues that you care about.
Not sure who is running? Then go to the secretary of the state's website (ctgov.org will get you started) and find out the candidate's names, political parties and offices that they are seeking.
Speaking of the secretary of state, did you know that Gerry Garcia (yes, that's really his name) could get bumped in next week's primaries in his bid to be Connecticut's new secretary of the state?
The Democrat is vying for the seat against party endorsed candidate Denise Merrill in what will be a three-way race Nov. 2 pitting either Garcia or Merrill against Republican Jerry Farrell Jr. and Green Party contender S. Michael DeRosa.
It's an important job, overseeing the state's elections, so we'd all do ourselves a favor by brushing up on the candidates' qualifications and platforms so we can make informed decisions come November.
Department of Consumer Protection (DCP) Commissioner Jerry Farrell Jr, nominated at convention for Secretary of State, reiterated the calls for fiscal conservatism, even through the Secretary of State's office.
Farrell just qualified for public campaign financing.and submitted his paperwork to the State Elections Enforcement Commission in preparation of the November general election.
Farrell’s campaign raised over $75,000 from over 900 contributors who were limited to a maximum of $100 per person.
Once approved, Farrell will receive a grant of $750,000 to compete with a Democratic opponent who will receive the same grant.

Farrell and Democratic attorney general candidate George Jepsen are the only statewide candidates without a primary election to receive public funding.
Posted by Greenwich Roundup at 8/01/2010 04:21:00 PM No comments: Links to this post

This Just In To The Greenwich Roundup Newsroom ......
Census workers losing jobs as count nears completion (Connecticut Post)
The U.S. economy is still prone on a proverbial gurney and in great need of resuscitation....
....... the office itself and about 2,000 in the field. They covered 10 municipalities in southwestern Connecticut, from Greenwich to Bridgeport. Currently, there are about 300 people working in the field and 35 and 50 people in the office, according to ...
Editorial Endorsement: Malloy In Democratic Primary For Governor (Hartford Courant)
Connecticut Democrats face a choice in the Aug. 10 primary .....
... its two gubernatorial contenders on primary day. Both Ned Lamont , a 56-year-old cable TV entrepreneur from Greenwich, and Mr. Malloy, 55, from Stamford , are smart, personable, capable, innovative. Both support humane social policies, such as ...
Round Hill Volunteer Fire Dept. hosts block party fundraiser (Connecticut Post)
The Round Hill Volunteer Fire Department held a block party Saturday in hopes of raising funds to replace a 20-year-old fire engine and renovate its circa-1957 building, last renovated in the '70s. "Our goal is to raise $2 million," department Chief Rick Strain said.....
... firefighters all wet. Dennis Stephens, 50, a resident of Falls Church, Va., who was visiting the family of a Greenwich resident he's known since college, loved the atmosphere at the West Old Mill Road fire station. "It's classic small-town ...

Standoff With New Canaan Man Ends With Negotiator, Police Dog (New Canaan Patch)
The suspect in an all-night police standoff has been transferred to the custody of Weston police while offiicials continue to search and patrol the Ponus Ridge Road home where the confrontation took place.A According to the New Canaan Police Department, the suspect, a man reportedly in his mid-40s, had made "threats of violence" on Friday against ...
... for. "The suspect refused to come out," DeMaio said. "We called in Special Response Teams from New Canaan and Greenwich, and had negotiators from both towns on the scene."A The standoff ended at about 8:30 a.m. Saturday when the suspect left the ... 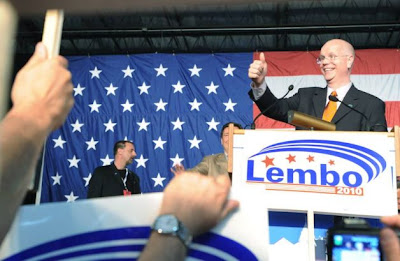 Lembo And Jarjura Battle In The Democratic State Comptroller Primary

A week from Tuesday, Aug. 10, registered Democrats will go to the polls to narrow the field in a number of contested races, but even after that, there are so many contenders in so many races that it's really hard to keep track.

People shouldn't complain about their elected representatives if they don't at least cast an educated ballot first.

Do a little homework first. Visit the candidates' websites and study their positions on issues that you care about.

The battle to be comptroller, is very important given the state's nearly $3 billion deficit.

Many wonder why this seat is contested in such hard times. One would think that it would be more fun to be the money person when the state is flush rather than broke. But this hasn't deterred Democrats Kevin Lembo and Michael Jarjura from battling for the democratic nod.

The winner of that race will face Republican Jack Orchulli and Green candidate Colin Bennett.

Lembo is nationally recognized for his expertise in health care systems and consumer protection, according to his campaign website. He currently leads the Office of the Healthcare Advocate for the state. He lives in Guilford with his wife; they have three children.
Today the Harwinton Democratic Town Committee is hosting a meet and greet so voters can meet candidates. The event will be held at the Harwinton Senior Center, 209 Weingart Road, from 2 to 4 p.m.
Mr. Lembo has confirmed that he will attend.

Mike Jarjura is the mayor of Waterbury. He worked as a state representative in the 1990s and as an assistant attorney general. He has a B.S. in management from Post College and a J.D. from the University of Bridgeport School of Law.

This weekenday, with Waterbury Mayor Jarjura was on the ropes after Lembo came out with three body blows.

First, a YouTube video surfaced of the Democrat speaking at a Tea Party rally.

"We needed a spark, and you're the spark that is going to be the change. So don't give up. Don't get discouraged because this country is worth fighting for and you're fighting for it," Jarjura said at the rally in Waterbury last September.

Jarjura, a Democrat, defended his attendance at the ultra-conservative rally.

Jarjura claimed he was there at the request of Waterbury citizens and he wasn't there to advocate for any political group," he said. "Every one is trying to do a 'gotcha' in these campaigns and manipulate things to something you don't even represent."

"It's an odd choice for a Democratic mayor to be attending a Tea Party rally," he told the press.

The second blow to Jarjura's campaign was the Waterbury teachers union endorsing Lembo, following the lead one week ago of the local police union.

Jarjura's response: it's backlash from the tough contract negotiations between the city and the unions as a result of the tight economy.

"Jarjura hired Rowland to a $100,000 dollar a year job after he got out of prison -- calling him the best governor Connecticut has ever had," the 30-second advertisement says.

Jarjura's mailer to registered Democrats, accusing Lembo of being a secret conservative. The mailer directed Democrats to a web site created by Jarjura's campaign.

“Some of my opponents’ claims are just bizarre. But let me be clear – I have never ever lied to the people of Connecticut or distorted my record," Lembo said.

The Lembo campaign responded by saying that Jarjura is a cultural conservative who opposes abortion rights.

The terse order by Judge James T. Graham frees Lembo to begin spending the $375,000 awarded to him last week for his Aug. 10 primary with Jarjura, the mayor of Waterbury.

Jarjura, who also has received $375,000 in public financing.

This legal challenge is the second of two attempts by Jarjura to deny public financing to Lembo.