The predetermined approval of the Planning & Zoning Board's Power House Park application was brought to an abrupt and rude halt leaving the audience in wonderment.

As the P & Z sat patiently listening to the audience, some in concurense, some with warnings of issues yet to come and only one who thought the project was a $10 Million boondoggle, the commission's common composure and stonewall attitude of a body already predetermined to approval, but needing to go through the charade of listening with great sincerity, knowing full well how they have decided to vote.

Chaos erupted. it started with quiet muttering of three of the members about something appearing to be causing contention. The balance of the members, objecting to the rudeness of these few for both the mutterings and knowing they were being excluded, demanded to be included.

"I've got the floor,"said one member.

The chairman, sensing rebelling in his usually obedient concurrers, called for a time out. In the middle of a public hearing no less, he stopped the tape, cut off a standing audience member about to speak and told the audience to amuse themselves, hoping no had the audacity to think they could listen in to this animated discussion.

What's going on we wondered, intimidated out off prying into this secret conversation unfolding before our very eyes?

Apparently, someone forgot about the open meeting laws of our state.

Now there’s a new one for the august lawyers in attendance, full of solemn splendor and dignity?
Well it turns out that Casey O'Donnell, the acting zoning enforcement officer had tipped over the apple cart on the way to the coronation of the Town's pandering to the soccer dads who were anxious for another field.

No matter that it would be under the Electromagnetic Force (EMF) of the super high tension power lines with a radiation field so strong, the wires "sing" their carcinogen danger on developing children's bodies. A force so strong, it makes the flagpole hidden cell tower, bathing an elementary school, seem miniscule in comparison.

Anyway, Casey had sent last minute warnings that he would not let the Town bring and place 4 feet of soil over acres of coastal flood plain protected land even if it was the way the Feds had ordered the soil carcinogen to be "capped" so our little dears would not be scampering around in their bear feet absorbing the arsenic up through the souls of their feet.

We want no "Love Canal" here in Greenwich. It would seem so tacky to kill the babies of the "super elite rich" of the families who call Greenwich home. Never mind, the issue of the vast Nutcracker army of water rats who will also call the Power Plant Park their home too. Thanks to the wonderful habitat created by the mammoth stone "rip-rap" placed on the sound's banks at the cost of Millions. It appears no provision by the Conservation Commission was ordered to create a habitat for the Rat's predators.

We can't have "killer" animals living in a pristine Greenwich park, can we?

A $10 million park for soccer players and water rats?

Is there a poetic justice here by the powers that be in Greenwich?

It seems the powers that be have a sense of humor and whimsy to their reprisal.

But back to Casey and his monkey wrench. A little history is order. Back 40 or so years ago when the National government decided that they needed to protect everyone who lived on a river, pond or sea shore from the calamity of flooding; not by removal, but by government sponsored insurance.

But how to get the people to buy the insurance voluntarily?

And how to force every municipality to declare what a flood plain was?

So our congress passed a law.

Really, passed one without an unconstitutional super majority.

The demand was this: If a town failed to adopt the Fed's declared flood plain boundaries and corresponding regulations, no one, not one, no matter whether they were subject to flooding or not, could mortgage their home with any institution in any way insured by the Federal government.

It seems Casey seems to read the law so that if the Town violates the covenants, with the P & Z's blessings, of the no "filling" of coastal flood plains, no one, no matter where they live, will be able to get a mortgage with one of these Fed insured institutions. Not one mortgage in all of Greenwich.

The powers that be do have a sense of humor, don't they?

What's a little 4 feet of fill here, there and everywhere?

The Feds have to learn to take a Joke.

And then again, maybe we can make a deal for our house mortgages from Abu Dhabi?

They’re it the money these days, aren't they?

The Feds say you have to cap. The Feds say, but not with dirty clean fill. A town, home to the gangsters who figured to how to sucker the "little people" into wealth destructive mortgages, surly ought to be able to wiggle out of this conundrum.

They were so smart the last time.

They only collapsed the world's wealth by 40%.

Smart minds can solve any problem.

UPDATE:
As Ussual,
The Grenwich Time Is A Day Late And A Dollar Short
Zoning commission to look into FEMA regulations at proposed park
By Frank MacEachern, Staff Writer
A potential hitch that could affect flood insurance rates for town residents caused the Planning and Zoning Commission to delay voting Tuesday on a plan to turn the Cos Cob Power Plant at 22 Sound Shore Drive into a new town park.
The plan would make the 9.7-acre site into a park that would include an artificial-turf field, walking paths and a children's play area.
Midway through the meeting, however, it was discovered that part of the site's waterfront is in an area that could be strongly affected by large waves from tropical storms and may violate Federal Emergency Management Agency guidelines.
Comment:
Once Again,
The Greenwich Time Fails To Report The Full Story
There Is Nothing About Acting Zoning Enforcement Officer Casey O'Donnell Email
There Is Nothing About The Public Meeting Tape Recorders Being Turned Off
There Is Nothing About The Illegal Sidebar P&Z Meeting That Violated The Open Meeting Laews Of Our State
The Greenwich Time Continues .....
The National Flood Insurance Program is administered by FEMA and is a voluntary program whose goal is reduce the loss of life and damage caused by flooding, said Katie Blankley, the town's deputy director for planning and zoning.
In exchange for federally backed flood insurance, municipalities, like Greenwich, adopt and enforce regulations to control new construction, substantial improvements and repairs, she said.
Part of the proposed new park falls into that category, and the commission is going to check with FEMA to see if the development can proceed, she said.
Comment:
Shouldn't Katie Blankley, the town's deputy director for planning and zoning have with FEMA to see if the development can proceed, before the public hearing was started?
Why Doesn't Greenwich Time Reporter Frank MacEachern mention that affordable workforce housing for emergency responders, nurses and teachers was supposed to be on the Cos Cob Power Plant Site?
Maybe Hearst Newspaper Reporter Frank MacEachern Has Been Around Long Enough To Know What Is Really Going On In The Backrooms Of Town Hall?
The Greenwich Time Continues ......
The commission left the matter open and may discuss it at its next meeting on Jan. 26.
The coal-fired plant began operation in 1907 to provide electrical power for the New Haven rail line, which runs just north of the former power plant site. The plant continued providing power to the trains that transported millions of commuters until the 1980s when it ceased operations.
The plant was removed in 1999 and 2000 at a cost of $6 million that was shared between the town and the state. Soil contaminated by PCBs (polychlorinated biphenyls) has already been removed from the site.
Town officials plan to open the park to the public in 2012..... Blah .... Blah ..... Blah ..... Blah ......
COMMENT:
The Greenwich Time Just Runs Planning And Zoning Press Releases Though The Spell Checker, Before Hi ting The Publish Button.
Once Again Frank MacEachern Has Failed To Stay For All Of The Planning And Zoning Meeting And Hasn't Bothered To Ask Planning And Zoning Officials The Tough Questions.
Mainstream Corporate News Reporter Frank MacEachern Didn't Know About The Illegal Sidebar Meeting, Because He Wasn't There To See It.
However, Citizen Journalist Barry Montgomery Was There Tuesday Night And Reported It On Wednesday.
That's Why If You Want To Know What Is Really Going On In Greenwich You Have Got To Read The Local Blogs And Out Of Town Newspapers
PLEASE SEE:
03/06/09 WHAT WILL THE VOTERS THINK? - Will CT Governor Jody Rell Let Her Republican Buddies In Greenwich Weasel Out Of An Affordable Housing Deal? 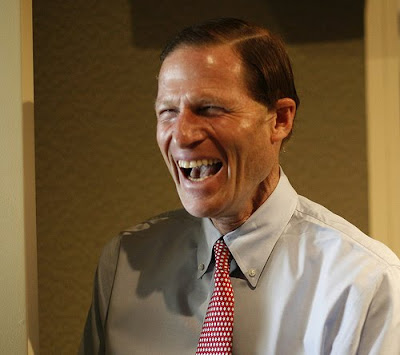 Polls Say Voters Are Tired Of Dodd Cutting His Wall Street Friends Some Slack As He Gets A Sweetheat Mortgage Deal .....

Blumenthal jumps in
Politico (blog)
Some good news on a basically dark day for the Democrats: Richard Blumenthal, the Connecticut Attorney General and the White House's preferred candidate all ...

Blumenthal Announces Senate Bid
Associated Content
Will Blumenthal take his seat? Back in March of '09, Attorney General Richard Blumenthal, a registered Democrat, was quoted by Dean C. Pagani, as saying "It ...

Jepsen to run for AG
TheDay.com

Republicans in the running to replace Dodd include Rep. Robert Simmons, who had been ahead of Dodd in the polls, Linda McMahon, former chief executive of World Wrestling Entertainment, and businessman Peter Schiff.

The National Republican Senatorial Committee sent a request this morning to Blumenthal's office asking for copies of information ranging from "budget requests" and "state credit cards issued to Attorney General Blumenthal or provided for his use" to statistics on "plea bargain rates, felony conviction rates, and all other data associated with cases handled by the Office of the Attorney General for each year beginning in 1991 through present."

Please send your comments, news tips and press releases to GreenwichRoundup@gmail.com
Posted by Greenwich Roundup at 1/06/2010 02:20:00 PM No comments: Links to this post

The Most Recently Updated Web Pages About Greenwich

Please send your comments, news tips and press releases to GreenwichRoundup@gmail.com
Posted by Greenwich Roundup at 1/06/2010 02:47:00 AM No comments: Links to this post

Have you noticed that there are never any comments in Greenwich Time's new ECHO comment forum?

Have you ever read the onerous registration form one must fill out to make comments on above forum?

COMMENT:
This dying money losing newspaper just can't get it's act together when it comes to the online edition.
With the topix messageboards the Greenwich Time had an active and pasionate online following.
All ECHO has done is create a frustrated readership that feels ignored.
==========================
Please send your comments, news tips and press releases to GreenwichRoundup@gmail.com
Posted by Greenwich Roundup at 1/06/2010 02:44:00 AM No comments: Links to this post