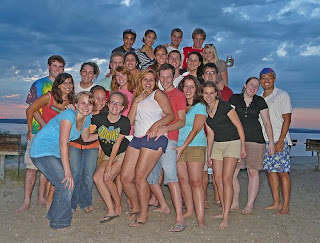 Laguna Beach has nothing on us!
I think we should have our own reality show
Dear Greenewich Roundup,

Just posted today - a lot of 20-somethings having a party and camping out on island beach:
http://blondeexcuse.pixxiestails.com/archives/2008/07/island_in_the_sun.html
Almost all the posts are in greenwich, actually:

Just when you thought, dear reader, that it was impossible for the local rag, aka Yellowwich Time, to get any worse than it's been for lo! these many years, it has sunk to yet another new low. The Amazing Incredible Shrinking Dollar has nothing on the morons who bring you the daily swill, fresh from the overflowing sewers of the seamy side of Greenwich. Now they have fired probably the most talented writer in Greenwich, Sarah Littman, at the behest of one of the slimiest, nuttiest, most virulent anti-Semites in this or any other state, the unspeakable Lee Whitnum.

But now the local rag has taken her seriously, and one of our Town's noblest and most honest citizens has been harmed as a result. Loopy Lee is no longer a joke; she is a toxic hate-monger. And she is running to represent you, dear reader, in the halls of our United States Congress.

You can read her latest rant, if you have the stomach for it, on the op-ed page of Yellowwich Time today. It has been considerably redacted, not to say censored, by someone at the rag in order to remove some of the more flagrant falsehoods and glaring libels. But Loopy Lee has been playing fast and loose with the truth for many years, to the point where your scribe doubts she is able to tell the difference between fact and fiction any longer.

In any case, the local rag has given her one-third of today's op-ed page, and Sarah Littman the boot. Instead of Sarah's concise, well-reasoned, and elegant prose, we are treated to Loopy Lee telling us that Jim Himes "[barks] like the trained seal he is," how Alan Dershowitz "capitalizes on American ignorance," and how Sarah's thoughtful assessments of the Whitnum candidacy are "hateful onslaughts." And that's just the cleaned-up censored version. Makes one wonder what the original screed must have been like.

Your scribe is all in favor of free speech, as he has made clear on many occasions in the past. But hate speech is not protected speech. In fact, it is a crime. In your scribe's humble opinion, Ms. Whitnum is utterly unqualified to spend time serving this district in Congress. But she might be qualified to spend time serving in jail. What a story that would make, if only we had an honest newspaper in this Town to report it!

Instead, the local rag has sacrified its best op-ed commentator in order to bring us the rants and raves of what a clinician might describe as a borderline personality. Shame on the pusillanimous Yellowwich Time! All of us in Greenwich, dear reader, are the losers because of the utter disgrace this tabloid has brought upon itself, and the drivel it is now trying to foist off on us. The time is now, if it ever was, to cancel your subscription to the Time. 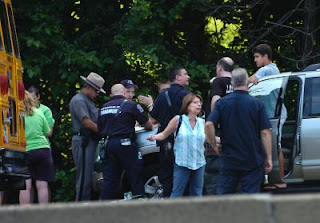 Sgt. John Maasz said the collision resulted in "a lot of injured people, (with) mostly bumps and bruises."

The crash occurred near Exit 2 at 3:10 p.m. Two buses were traveling in the right lane when the first bus rear-ended a Ford Explorer and the second bus hit the first one, according to N.Y. State Trooper Angel Rosado. Minor injuries were suffered by passengers in both buses, who were apparently children and staff returning from a summer camp field trip, Rosado said.

Rescue units responded from as far away as Stamford and White Plains, N.Y., Rosado said.

About 50 police could be seen at the scene of the crash.

STAMFORD - An attorney for the alleged "dinnertime bandit" argued in court yesterday that his client's arrest warrant should be dismissed and that a kidnapping charge should be dropped.
New Wiffle ball field opens

Welcome to the House that Lawyers Built. Exactly one week after they were kicked out of a municipally-owned lot in Riverside in a tearful farewell, a group of jaded teens christened a new Wiffle ball field yesterday that the town created for them behind the International School at Dundee.

A Greenwich High School assistant football coach has quit after several of his players were arrested for throwing eggs at his cars, athletic officials said.

With public funding of elections available for the first time this year in Connecticut, four of the six candidates on the General Assembly ballot in Greenwich are accepting taxpayer money for their campaigns outright or are leaning toward doing so.

In the 151st House District race, both Republican Alfred Camillo and Democrat Edward Krumeich Jr. applied for grants from the Citizens' Election Fund.

So did Mark Diamond, the Democratic Senate hopeful in the 36th District, which includes Greenwich and parts of Stamford and New Canaan.

State Rep. Lile Gibbons, R-150th District, who is running unopposed for re-election, said she will probably go the same route.

When Santa Clause comes to Greenwich in late July, he doesn't arrive on a reindeer-drawn sleigh, but on a big red fire engine.

Gaia has been one of the hot spots in Greenwich during the past several years. So why must the casual fine dining restaurant convert to a French bistro in September?

STAMFORD - As the price of crude oil continues to drop - it is down more than $20 a barrel since hitting a record above $147 a few weeks ago - the city has locked in fuel prices for the fiscal year that began July 1.

Is there a bigger bunch of bandwagon-jumpers than the baseball fans of Connecticut? Maybe not, judging by the results of a recent poll from Quinnipiac University, which showed state residents now prefer the Boston Red Sox to the New York Yankees, 41 to 40 percent.

The Associated Press
BURLINGTON, Conn.—An attorney for a high school student who brought a free speech lawsuit against her school district last year said he now plans to file a libel lawsuit against the principal.

Doninger and her family have been at odds with the district since last year, when Doninger used offensive slang to refer to administrators on an Internet blog. School officials removed her as class secretary, which Doninger said was a violation of her constitutional rights.

The case went as far as the U.S. 2nd Circuit Court of Appeals in New York as Doninger sought an injunction to regain her spot as class secretary and speak at her class graduation in June. The court rejected that request, but her lawsuit is pending.

The threat of a new libel lawsuit stems from an e-mail exchange that Niehoff had with a Wisconsin man who read about the legal case in the New York Post.

School administrators said Niehoff improperly disclosed information about Doninger in the exchange, which the man forwarded to Doninger's family. Niehoff was suspended for two days without pay for the incident.

Schoenhorn said Thursday that Niehoff will be sued for libel "for the false things she said to people about Avery."

A formal lawsuit has yet to be filed, and Schoenhorn declined to give details about when and where the suit might be filed.

Doninger's mother, Lauren, said Niehoff was punished for making a comment and distributing it on the Internet, the same reason cited for the punishment of her daughter, she said.

"It's not a decision we made lightly," she said. "The irony is too overwhelming that Avery, at 16, made some ill-considered remarks and sent them into cyberspace, and she was punished relentlessly. The principal effectively does the same thing. Does she expect no consequences?"