Please send your comments, news tips and press releases to GreenwichRoundup@gmail.com
Posted by Greenwich Roundup at 10/11/2011 10:07:00 PM No comments: Links to this post 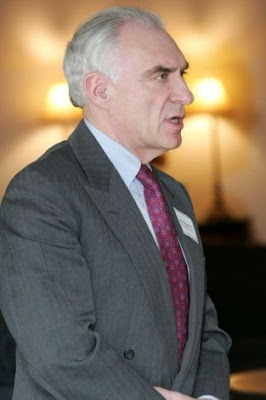 10 YEARS AGO I HAD ONE BOSS, NOW I HAVE 200 BOSSES, MY CUSTOMERS. IN SEEKING THE OFFICE OF FIRST SELECTMAN I AM GOING TO HAVE OVER 60,000 CUSTOMERS – THE RESIDENTS OF OUR TOWN.

MY FIRST ASSESSMENT IS THAT MY NEW CUSTOMERS, GOING DOOR TO DOOR AND MEETING MANY OF THEM, ARE NOT HAPPY. THEY WANT TO BE BETTER SERVED BY TOWN HALL, THEY WANT THE PUBLIC SCHOOL SYSTEM TO BE IMPROVED, THEY WANT ISSUES THAT HAVE ACCUMULATED OVER YEARS TO BE TACKLED.

I LOOK AT THE TOWN AS A BUSINESS. THE 60,000 CUSTOMERS ARE ALSO SHAREHOLDERS AND IF WE WERE QUOTED ON THE STOCK EXCHANGE OUR STOCK WOULD BE DOWN! BECAUSE THE BUSINESS IS NOT BEING WELL MANAGED. WE’RE SUFFERING FROM BENIGN NEGLECT. WE’VE LOST OUR STRATEGIC FOCUS.

WE’RE IN A COMPETITIVE ENVIRONMENT IN FAIRFIELD COUNTY AND WE NEED TO GET OUR ACT TOGETHER. WHAT IS OUR STRATEGIC GOAL? I SAY IT IS TO ENHANCE THE PROSPERITY AND REPUTATION OF OUR TOWN. THAT MEANS THAT WE NEED TO GRASP THE NETTLES OF DECLINING SCHOOL PERFORMANCE AND INFRASTRUCTURE DECAY. SCHOOLS IN PARTICULAR ARE THE KEY BECAUSE YOUNG FAMILIES COMING TO GREENWICH, AS WE DID ALMOST 30 YEARS AGO, ARE LOOKING FOR SUPERIOR PUBLIC EDUCATION.

I’M A BUSINESSMAN, NOT A LIFELONG POLITICIAN. I HAVE 30 YEARS OF MANAGING AND FINANCING LARGE PROJECTS, HANDLING LARGE BUDGETS AND 10 YEARS AS AN ENTREPRENEUR, CREATING A COMPANY THAT NOW HAS 30 EMPLOYEES.

I OFFER BUSINESS LEADERSHIP TO GREENWICH: THE FIRST SELECTMAN IS THE CEO OF THE TOWN AND IN THAT ROLE I WILLSET STRATEGY AND HOLD PEOPLE AND BOARDS ACCOUNTABLE FOR PERFORMANCE. WE NEED TO BE SHAKEN OUT OF OUR LETHARGY.

GREENWICH IS YEARNING FOR A FIRM HAND AT THE HELM AND I OFFER IT.

I ASK FOR YOUR VOTE AND YOUR OVERWHELMING SUPPORT ON NOVEMBER 8th.

The defense for Joshua Komisarjevsky said Tuesday that Steven Hayes claimed to have been involved in the murders of more than a dozen women.
Posted by Greenwich Roundup at 10/11/2011 10:30:00 AM No comments: Links to this post

Please send your comments, news tips and press releases to GreenwichRoundup@gmail.com
Posted by Greenwich Roundup at 10/11/2011 07:57:00 AM No comments: Links to this post

Please send your comments, news tips and press releases to GreenwichRoundup@gmail.com
Posted by Greenwich Roundup at 10/11/2011 07:56:00 AM No comments: Links to this post

10/11/11 Jeffrey Goldberg: Arab Spring Has Turned Autumnal * Turkey is on a War Path * The Greater Goal Cannot be Accomplished in One Go

The Middle East is plunging toward crisis. The early promise of Tahrir Square has been supplanted by dismay that the Egyptian authorities -- such as they are -- allowed mobs to lay siege to the Israeli embassy in Cairo this past weekend.

Not long ago, Turkey and Israel were strategic partners. Now, relations between those two key U.S. allies are in ruins. When a recent United Nations report on the deadly confrontation between the Israeli military and a flotilla of Gaza-bound activists that sparked this crisis largely exonerated Israel, Turkey reacted by threatening to send warships to the eastern Mediterranean.

And the Jewish state faces a miserable month at the UN, where the Palestinians, who have refused to meet Israel at the negotiating table, are planning to seek recognition as an independent state, with potentially catastrophic consequences for both sides.

"As the months of Arab Spring have turned autumnal, Israel has increasingly become a target of public outrage, the New York Times" Ethan Bronner wrote this weekend from Jerusalem. "Some here say Israel is again being made a scapegoat, this time for unfulfilled revolutionary promises. But there is another interpretation, and it is the predominant one abroad - Muslims, Arabs and indeed many around the globe believe Israel is unjustly occupying Palestinian territories, and they are furious at Israel for it." (The third interpretation, which is supported by the history of the conflict, is that Arabs never were interested in peace with Jews. Since 1920s Arabs have been systematically and quite successfully undermining and destroying the inspiration for Jewish homeland - Eretz-Israel!)

At least 23 people were killed and more than 100 were wounded in Cairo as security forces fought Christian protesters demonstrating against the burning of a church in the south of the country. The ruling military council has promised to protect all Egyptians while the country deals with a transition between a revolution and elections, but Egypt's minority Christians say the council is doing nothing to stop attacks on their churches and people by radical Islamists.

For the first time in recent history, Egypt has decided to completely bar Jews from visiting the tomb of Rabbi Yaakov Abuhatzeira, head of the dynasty that included Rabbi Yisrael Abuhatzeira, the famed "Baba Sali."

Food for Thought
by Steven Shamrak

I hate anti-Semitic stupidity of anti-Israel idiots! They have complete contempt of the facts of history, never question words or actions of Israels enemies as Arab propaganda, but always insist that Jews must prove every point they make in Israels defence, which are immediately dismissed and delegitimised as Zionist propaganda, without due consideration. Even pictures of the proposed by PA/PLO/Hamas map of , which encompass all , are dismissed as a Photoshop product made by Zionists. (I wrote this after face to face conversation with a journalist.)

The Obama administration is in "intensive" discussion with lawmakers to release $200 million in blocked aid to the PA. Congressmen Gary Ackerman, a member of the House Foreign Relations Committee, is saying that "if the PA is willing to place its fate in the hands of the UN, perhaps they should also seek aid from the UN." State Department spokeswoman Victoria Nuland said "We still have some money in the pipeline..." US Secretary of Defence Leon Panetta insisting the funds have helped improve 's security. Meanwhile, it was reported that European Union foreign policy chief Catherine Ashton has assured PA officials they were still on the EU dole. (The government is financing Islamic terror organizations like PLO and Hamas and Islamic terror sponsored states like !)

Settlement Freeze or No Talks

Nabil Abu Rudeineh, a spokesman for PA Chairman Mahmoud Abbas said A return to negotiations requires a commitment by to stop settlement construction and to recognise the 1967 borders (1949 armistice lines -ed.)" (How about - Recognise as a Jewish state and end terror attacks or no talks?)

Turkey is on a War Path

Turkish warships have been harassing Israeli merchant vessels in waters off ordering them to change course in a bid to assert Turkish mastery in the eastern . Western naval sources say the situation is getting explosive enough to spark a major conflict.

"It is silly to talk about a Jewish state," French President Sarkozy said in reference to Prime Minister Binyamin Netanyahu's assertion no true peace could be made until officials in Ramallah accepted Israel's essential Jewish identity. "It would be like saying that this table is Catholic." (The idiot has compared state of Israel with a table! But it is not idiotic to ban wearing burkas to protect the French character of his country.)

Money does not Buy Love

PA officials slammed the freeze of $200 million in aid by US lawmakers while protesters hurl shoes at US diplomats in Ramallah.

Mahmoud Ahmadinejad, the driving force behind 's nuclear program and most vocal of 's enemies, is on his last legs as president. Supreme Leader Ayatollah Ali Khamenei has stripped him of most of his powers and shut the door against his allies running for the Majlis (parliament) in March 2012.

Quote of the Week:

"The PLO considers that the signing of the Declaration of Principles constitutes a historic event, inaugurating a new epoch of peaceful coexistence, free from violence and all other acts which endanger peace and stability. Accordingly, the PLO renounces the use of terrorism and other acts of violence and will assume responsibility over all PLO elements and personnel in order to assure their compliance, prevent violations and discipline violators." - Letter from Arafat to Prime Minister Rabin - - The Israeli-Palestinian Interim Agreement, known as accords, was based on premeditated lies!

The Greater Goal Cannot be Accomplished in One Go

Following are excerpts from an interview with Abbas Zaki, member of the Fatah Central Committee, which aired on the Al-Jazeera network on

If withdraws from , evacuates the 650,000 settlers, and dismantles the wall - what will become of ? It will come to an end...

Who is nervous, upset, and angry now? Netanyahu, Lieberman, and Obama... All those scumbags. Why even get into this? We should be happy to see upset...

If we say that we want to wipe out... C'mon, it's too difficult. It's not (acceptable) policy to say so. Don't say these things to the world. Keep it to yourself& (Arabs or so-called Palestinians have always been disrespectful toward and they have never hidden their true intention to destroy the Jewish state. It is time to stop playing the deceitful game called "Peace process" and pursue the Zionist dream of Jewish people. This is the only way for to reunite Jewish land and regain international respect!)