I'm surprised the Greenwich Roundup allows such bullshit bias slander to be portrayed on their pages. This is a disgrace. 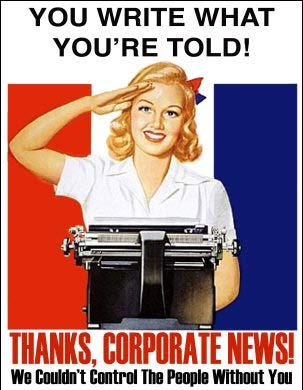 There Is Nothing To Report Here
UNFAIR AND UNBALANCED:
The Greenwich Citizen, The Greenwich Post And The Green Kitty Litter Liner Known As The Greenwich Time Are Afraid To Rock The Boat Of The Powers That Be In Greenwich
Last week this editorial was sent it to all the print media in Greenwich. Interestingly, two corporately owned newspapers stated they would not publish it, and the other newspaper has not published it still.
Attorney General Richard Blumenthal Should Require That All Three Greenwich Newspapers Paste The Following Warning On It's Masthead:

WARNING:
This Newspaper Is Owned By
An Out Of Town Corporation
And Lacks The Diversity, Skeptism
And Alternative Points Of View
Required For A Democracy.

Here Is The Editorial That Hearst And Acorn Newspapers Have Censored From The Voters Of Greenwich......
The Power of the Assembly
The Representative Town Meeting (RTM), as a deliberative society, undertakes the onerous task of balancing the wishes of those we represent with the goal of making decisions for the good of the community as a whole. This balancing, like any debate, will have proponents and opponents whose desires are at odds with each other. The task put to the RTM and its members requires orderly and fair discussion and debate of the questions and issues at hand. Without rules and procedures, the discussion can quickly descend into chaos.....
======================
Please send your comments, news tips and press releases to GreenwichRoundup@gmail.com
Posted by Greenwich Roundup at 4/20/2010 11:13:00 PM No comments: Links to this post

This is really a nice blog I like to read this blog daily it has got all the informative stuff about Greenwich that I want to know about.

I want to subscribe it so can you tell me when your blog gets updated.

Please send your comments, news tips and press releases to GreenwichRoundup@gmail.com
Posted by Greenwich Roundup at 4/20/2010 12:29:00 AM No comments: Links to this post