Greenwich, CT is in an uproar over a mysterious Russian billionaire's proposal to buy an $18 million home, tear it down, and build what would be the biggest home ever built in the tony Connecticut enclave - a 27,000 square foot supermansion. The billionaire in question is reportedly Valery Kogan, who has ties to Valdimir Putin.

The Connecticut property is the latest in a buying spree. Just last month he finished purchasing a huge beachfront lot in Israel, combining 5 neighboring properties, for about $17 million (scroll down for more). He'll be tearing down existing homes there, too.

Watch a detailed report on the Greenwich....

... Last monthKogan bought five lots in Israel for another home:

Valery Kogan was entirely unknown in Israel up until a month ago, when he drove the local business and real-estate world crazy by purchasing five lots in Caesarea, a total of 11.5 dunams, for $17 million, on which to build an estate. Amid the media circus, it was reported that the Jewish businessman is connected to the secret services in Russia, and that he is close to former president Vladimir Putin. Some imagined Putin coming to visit his close friend and the two of them walking along the beach in Caesarea.

The aura of mystery increased when news came of the impressive rise in Kogan's wealth, at least according to the Russian magazine Finans. In 2007 it showed him in 499th place on the list of the richest people in Russia, worth $90 million. A year later he skipped up to 157th place with $600 million.

The only thing that is known for certain is that Kogan is connected to East Line, which operates Domodedovo International Airport, the largest airport in Russia, with 13-14 million people passing through each year. 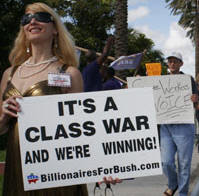 A whole lot of flushing going on …
by admin

A businessman wants to do just that in “back country” Greenwich – tear down a massive home and build something unprecedented, even for Greenwich. Read the rest of the article here …
Imitation Of Mink - http://imitationofmink.com/

Comments About When Too Big Is Too Big:

I predict by the end of the year all these rich people are going to jumping out of there 2nd story Mcmansion's because the economy is going to be so bad,even they won't be able to afford them.

So Mr. Lawyer save your client from making a big financial mistake tell to start stuffing her mattress instead.

When we are looking at global financial collapse, the end of oil and the pending environmental catastrophe, it seems unfathomable to me that this strata of society floats obliviously above the concerns, thought processes and initiatives of us hard working, dedicated Americans that are trying to make the world a better place for our children and grand children.

When I lived in Greenwich, I used to say, "Big House, Big Car, Big A--hole". It was only after years of seeing the decay of values and the sickness of "affluenza", that my husband and I decided to extract our children and look for a healthy place to raise our kids, where what we had didn't matter, but who we were was important. Happy to say we found it here. It's good to breathe again.

The Greenwich Time should do a story that examines the angry neighbors' "modest" homes and see what simple lifestyles they all live. I'm sure their practical dwellings don't look anything like the latest issue of Robb Report.....

Email ThisBlogThis!Share to TwitterShare to FacebookShare to Pinterest
Labels: Affluenza 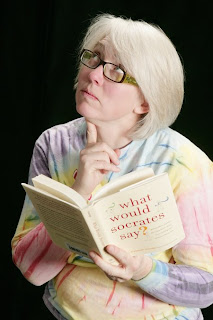 Local comedienne Jane Condon and her friends, fellow comedians Brad Zimmerman and Richie Byrne, who has appeared on Comedy Central, will unite next week to “Save the Jenny.

The following are this week's religious listings.

04/17/08 - "It's in a sorry state of repairs," Carolyn Giampe, Aquarion's project manager, said yesterday. "Emergency repairs will no longer cut it." 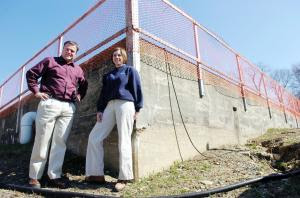 Aquarion Water Company Operations Manager David Medd and Project Manager Carolyn Giampe in the shadow of the current clearwell on the company's backcountry property. They are proposing a rennovation and expansion of the well to more than double its current capacity to meet with what they say are current standards.
( Keelin Daly/ Staff Photo)
Aquarion works to build bridge over troubled waters

The water company, which expects to submit the plans to the town for land use review next month, will meet with neighbors today to discuss proposed landscaping improvements and unveil more details of their plans to persuade neighbors to drop their opposition.

At issue is a plan to triple the size of a water storage tank and build a new 6,800-square-foot chemical storage structure at the Putnam Water Treatment Plant on DeKraft Road. The upgrades and additions are necessary because the 1926 plant is antiquated, officials said..... 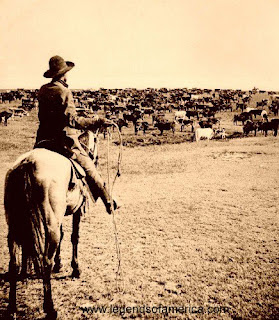 Because the building housed the printing and production operations for the Advocate and Greenwich Time, it was assessed as a half commercial and half ...

Opposition to a big, big mansion in Greenwich
Waterbury Republican American - Waterbury,CT
GREENWICH, Conn. - Opposition is building against a proposed mansion that could be among the biggest homes in a wealthy town known for opulent estates. ...

Fairfield Greenwich Group has added a senior professional to its team at the hedge fund specialist's New York office. David Horn joins the firm as partner ...

At Home in Greenwich is sponsoring "Building Exercise into Your Daily Routines," a presentation by Stephanie R. Paulmeno, director of community planning, ...

The Woman's Club of Greenwich will hold its Annual Appraisal Mania on Saturday, April 26, at the club house at 89 Maple Ave. from 10 to 4. ...

Greenwich High School boys lacrosse coach Paul Burke has been around sports long enough to know that a subpar performance often follows a ...


The Federal Aviation Administration’s lack of presence at Monday night’s community forum at Town Hall fueled an already blazing fire under lawmakers representing the region, who vowed to stand together and continue their fight against the agency’s proposed airspace redesign, which shifts airplane traffic over Fairfield County.


Educational assistants in Greenwich have declared an impasse in their contract negotiations with the Board of Education, which could affect the level of attention students in the town’s public schools receive.


United States Sen. John McCain of Arizona is looking ahead to what is expected to be an expensive race for the Presidency.

With that in mind, Mr. McCain took a break from the campaign trail last Wednesday to visit Belle Haven for a private fund-raiser. Tickets cost $2,300 a person, and interaction with Mr. McCain at the reception, which was held at the Belle Haven Club, cost an extra $1,000. While some happily paid for the opportunity to rub elbows with the Republican nominee, the greeting he got outside wasn’t all friendly.

Despite urging from the Parks and Recreation Department that it implement a slower-paced approach, the Board of Selectmen unanimously voted to ban the use of all pesticides on town-owned playing fields.

Getting the boss’ attention James Lukaszewski discusses his new book Why Should the Boss Listen to You?, 5:30, Friday, April 18, Hyatt Regency; free; reservations required; 860-354-6488.

Send us your article and photo about an upcoming event or an event that already took place. Your submission will be reviewed in less than one business day and posted as soon as possible when approved.
Posted by Greenwich Roundup at 4/17/2008 11:17:00 AM No comments: