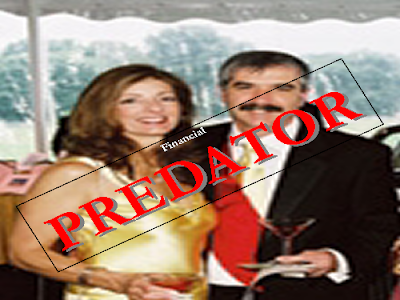 READER ALERTS US THAT THERE IS
MORE INFORMATION AVAILABLE:
Posted by Greenwich Roundup at 3/25/2009 07:21:00 PM No comments: Links to this post 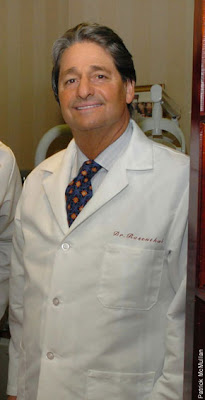 NEW YORK DEFECTOR: Dentist Larry Rosenthal is eyeing a move to Greenwich now that pols are pushing a wealth tax in New York

DIANE RAMIREZ is successful in business, lucky in love, and a die-hard New Yorker. But don't push her too far.

"I love New York. I don't want to leave." But the thought of adding a so-called millionaire's tax which could affect couples making $500,000 is making tough New York life unbearable.

"This is the straw that's breaking the camel's back," said Diane, 61, the president of Halstead Property, who's considering Connecticut

"It's that one extra little thing that changes the balance. The thing that makes you think, 'Is this city the place you want to live?' "

Dr. Larry Rosenthal is a dentist to the stars perfecting the smiles of Saudi princesses and Hollywood royalty. He also loves New York. But does he love it enough to pay as much as 50 percent more in tax, on an income in excess of a million a year?

"I'm thinking of moving to Greenwich, Connecticut," said Dr. Rosenthal, who lives on the East Side, has a son in private school and gives a nice chunk each year to the American Cancer Society and Lou Gehrig's disease research. If he goes, so does all that.

"I could commute," said Rosenthal. "I could open a practice there. It's not far away. It's very approachable. It's sad, because we're the people who keep the economy going, paying mortgages and private school. Still, I have to consider what it costs to live here."

State government has put a target on the backs of folks like Larry and Diane, who face a potential hike on income estimated at a half-million to $700,000.

But all the millionaire's tax will wind up doing is chasing out folks who donate to charities, contribute jobs and pay the bulk of taxes. When these people are run out of town, what happens to everyone else?

03/25/09 FORGET ABOUT A BOX OF CANDY: Greenwich Mothers Should Run Up To Ridgefield And Run In A 5k On Mothers Day 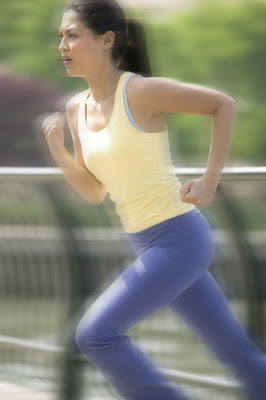 'Run Like a Mother' on Mother's Day in Ridgefield
NewsTimesLive.com
RIDGEFIELD -- If you are a mother of young, or even teenage children, you're on the run, double time, for a good part of the day. If you have a job, the pace triples and the days race.
Which is why you might ask why, on Mother's Day, you should start out with a 5K race?
Exercise, solidarity, fun and a flower for everyone who crosses the finish line? Those are at least some of the answers for those who join in the second annual Run Like Mother road race here on May 10.
"People told me last year 'It's the best Mother's Day I ever had,'" said Megan Searfoss, the organizer of the event. "You get a T-shirt, you get a flower and your husband gets off the hook about serving you breakfast in bed.".....
....The idea for the race started a year earlier when Searfoss and her friends -- who call themselves, informally, The Ridgefield Racy Ladies -- held a private run for themselves in town on Mother's Day and had about 30 people join in......
... When Searfoss' husband, Chon, got a job in Greenwich three years ago, the Searfoss family -- Chon, Megan and their three daughters Abby, 16, Sarah, 11 and Jane, 9 -- moved to Ridgefield and they settled in. ...
===============================================================
Please send your comments, news tips and press releases to GreenwichRoundup@gmail.com or click on the comments link at the end of this post. 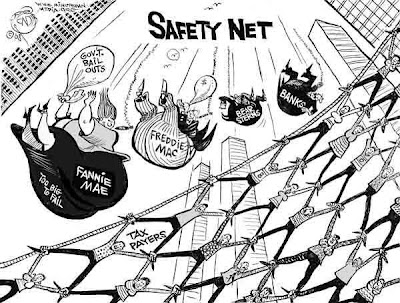 Stocks fall as Bernake, Geithner want more power over financial firmsm New York Daily News
U.S. stocks fell as the nation’s top two banking officials called for stronger regulation of financial firms and Nobel Prize-winning economist Paul Krugman said the government will have to seize major lenders.
Citigroup Inc. and Bank of America Corp. retreated after the shares jumped more than 19 percent yesterday on the Treasury’s plan to purge toxic assets from banks. Southern Co. led a gauge of utilities to a 2.2 percent drop amid concern the U.S. will levy fees on fossil-fueled power plants. Walt Disney Co. slumped 3.3 percent following a downgrade by Goldman Sachs Group Inc., which said the stock is expensive.
... “When you’re buying equities, you’re buying a stream of earnings and current earnings are in freefall,” said Douglas Cliggott, the Greenwich, Connecticut-based manager of the $81 million Dover Long/Short Sector Fund, which beat 97 percent of its peers last year. “We haven’t hit bottom yet.” ...
================================================================
Please send your comments, news tips and press releases to GreenwichRoundup@gmail.com or click on the comments link at the end of this post.
Posted by Greenwich Roundup at 3/25/2009 10:29:00 AM No comments: Links to this post 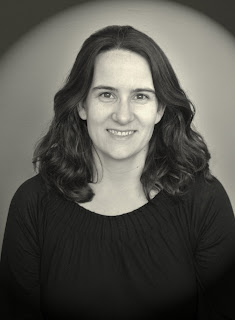 Attached please a Press Release announcing Ms. ’s LEED AP achievement for our firm. Could you please list it on your webpage?

Please feel free to contact me with any questions.

Please send your comments, news tips and press releases to GreenwichRoundup@gmail.com or click on the comments link at the end of this post
Posted by Greenwich Roundup at 3/25/2009 08:43:00 AM No comments: Links to this post

MTA proposes eliminating trains
Connecticut Post
The New Haven Line cuts would eliminate a 1:34 pm run between Grand Central and New Haven which now stops at Greenwich and Stamford before making other ...

Newcomer mulls Senate bid
Stamford Advocate
Fresh off his stint as US ambassador to Ireland, Greenwich resident Thomas Foley is adding his name to a growing list of potential ...

Business People
Stamford Advocate
Paul Sacco, of Old Greenwich, has been promoted to vice president of STV, a provider of construction management, engineering, architectural, planning and ...

In town
Greenwich Time
The YWCA of Greenwich is offering a $100 discount off each session of its summer camp "TA-YI-TO" for children registering by Tuesday. ...

A tree grows in Greenwich
Stamford Advocate‎
With the number of trees on Greenwich Avenue dwindling, the Greenwich Tree Conservancy is trying to save one more from removal. ...

No. 16 Dartmouth Scores 12 Unanswered to Down Fairfield
LaxPower
Shannie MacKenzie (Greenwich, Conn.) was solid defensively and scooped up a team-high three ground balls. Fairfield struck first in the game with a goal ...

Putting The Advocate in some historical perspective
Stamford Advocate
Joel Mann of Greenwich for his anti-Masonic views. Early issues of the Sentinel contain many quaint local advertisements. For instance, an advertisement for ...

Three community leaders elected to the board....
Norwalk Plus Magazine
The Fairfield County Community Foundation in Norwalk announced that Vicki Craver of Greenwich and Mary-Jane Foster and Bruce Hubler of ...

Where's the outrage?
Boise Weekly‎
In February the protestors disrupted the hush of Frey’s manicured Greenwich, Conn., neighborhood by chanting “Fix our loans, save our homes. ...

Help destressing in anxious times
Stamford Advocate
Much has been said about watching water boil, but these days it probably doesn't take as long as it once did.

At least not in the metaphor Dr. C. Evers Whyte uses to describe the stress people are under. A constant barrage of responsibilities, pressures and fears can make it hard for some people to cool down between stressful moments.

He opened the Stamford center in June, after operating a practice in the Riverside section of Greenwich for more than 10 years. The center recently launched ...

Pav Sethi, former global head of volatility arbitrage at Citadel Investment Group LLC, plans to start his own hedge fund, according to a person familiar with the matter.

Sethi worked for Ken Griffin’s Citadel for four years before leaving in February 2008. He was previously a portfolio manager covering volatility arbitrage at JD Capital Management LP, a Greenwich, Connecticut-based hedge fund, and had worked in Morgan Stanley’s equity-derivatives trading group in London.

Brunswick lacrosse looks for winning season
Greenwich Time
SHOWDOWNS: The game everyone has circled on their calendar is the April 21 matchup with crosstown rival and FCIAC powerhouse Greenwich High School at Cosby ...

Avenues for relief to be showcased
Greenwich Time
In response to the large number of new clients turning to the town Department of Social Services during the recession, department officials are planning a large multi-agency event Friday to give people the tools to find relief.

Look past the complaints about library project

Regarding the Byram Shubert Library renovation ("Status of library annoys Byram,") Greenwich Time news story, March 23), it is interesting to note that there are still a few naysayers and maligners in the Byram community, which in general has fully supported the renovation project.

I have lived in Byram for over 30 years and have sometimes observed the negative and unconstructive contributions of the few. Messrs. Joe Kantorski and Mike Bocchino are doing a great job of being negative about the project, especially when their public comments are so uninformed, and when they have had the opportunity to attend the regular construction meetings to keep up to date with the renovation and to have a clearer understanding of the process this project has gone through..

I have observed this project from close range over the past six years, and know how many volunteer hours that numerous people have put into making it happen, even when these volunteers had other full-time (paying) jobs.

Come on, Mike and Joe! Smile! Be positive! The Byram Shubert Library renovation is a wonderous addition not only to the Byram community, but to the town of Greenwich.

Where does the buck stop?
Greenwich Time Editorial
Bernie Madoff is in jail. Woo-hoo. Ding dong, the wicked wretch is dead. One year ago, Madoff -- along with the heads of Merrill Lynch, Bear Stears, Lehman Brothers and a long list of others -- were pseudo-gods, superhumans delivering big payoffs to investors who could not believe their good fortune.