11/18/11 Forget About The Greenwich Time: Greenwich Patch Benefied From November Elections; Many Of Its Sister Sites Had Big Traffic Gains Last Week 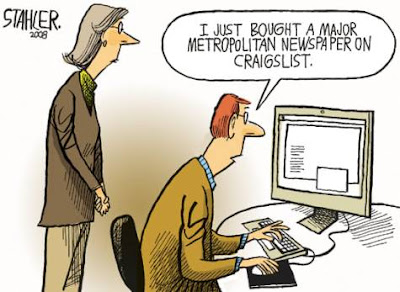 It IS Not Just Greenwich Roundup That Is Eating David McCumber And The Greenwich Time's Lunch With Double Digit Web Traffic Gains.....

The Clueless Hearst Newspaper Responce: "But can a drive-by audience be enough?"

Events are a cornerstone of journalism, whether planned or unexpected. Whether it’s a World Series run or a tropical storm and Halloween snow storm that throws the town of Greenwich in the dark.

This especially seems to be the case for the Greenwich Patch, which saw substantial traffic increases on it's hyper local Greenwich news site last week as a result of the November elections and the Republican sweep.

Greenwich Patch traffic was up over 50 percent on some days a from baseline because of the noteworthy election where the town Democrats ran a full slate of candidates. Reader comments were up and mobile traffic increased. All told, the unbiased Greenwich election coverage increased traffic to the Patch news blog.

Events like election night are of particular importance to the residents of Greenwich and Patch, met many of those expectations.

The Greenwich Roundup and the editor and reporters at Greenwich Patch have once again proven that you don't need a 100-year-old name, and the dozens of beat up corner newspaper boxes.

Hurricane Irene, for instance, gave Greenwich Roundup and Greenwich Patch a lot of new users who are naturally inclined to go look for the most timely information.

It may be a limited set of data, but Hurricane Irene, The Halloween Nor Easter and the Greenwich election season indicate Greenwich Patch is filling the needs of local news hunters — people searching out specific local news information at a time when it’s important to them.

The Greenwich Patch is kicking Hearst Newspaper editor David McCumber's ass thanks to a mix of good SEO, Twitter, and old-fashioned word of mouth.

The "Fluff Proud" Yellowich Time had better change its ways or its going down and going down hard. It won't be long until the money losing Greenwich Time is just a page in the Hearst owned Connecticut Post out of Bridgeport.

I am sure that Senior Vice President for Digital Media at Hearst Newspapers,
Lincoln Millstein is thinking elections, like hurricanes and snow storms, quickly subside, and there’s no guarantee any of those Greenwich Patch readers will stick around.

But Lincoln had better wake up and smell the coffee, because drive-by readers are a fact of life for all news sites — even money losing ones that used to have big buildings in downtown Greenwich.

The ebb and flow of single-copy newsstand sales around a big event is very familiar to the Greenwich Time and its collection of rusty old newspaper boxes.

The Greenwich Time and the Greenwich Patch are competing in a town that only has 61,171 residents and that means there aren’t a ton of potential regular readers around — which makes converting drive-bys into long-timers is even more important.

The Greenwich Times strategy of filling the gaps with regional coverage from places like Danbury, is just not going to cut it.

At some point Hearst Newspapers has to wake up and realize that using hopelessly biased third rate reporters like Niel Vidgor was only profitable when the local rag had a monopoly on news gathering.

Back then the Greenwich Time could run a press release through the spell checker, before hitting the publish button and make buckets of money.

The Greenwich Times continued policy of ignoring the many diverse voices of Greenwich will most likely be it's ultimate downfall.

Now Here Is The Latest So-Called Local News Report From The Greenwich Time .....

BRIDGEPORT -- Police are asking for the public's help in identifying a man who they say robbed one city business and tried to robbed another over the course of several hours last week, police said.

The suspect went into the Dunkin Donuts at 529 North Ave. around 8 p.m. last Tuesday with the handle of a handgun sticking out from his pants, according to Bridgeport police Det. Keith Bryant, a department spokesman.

The suspect was described by police as a man in his late 20s, who was clean shave and wore a long-sleeved green thermal shirt, green hat and blue jeans. A surveillance photo has been released. The man stood about six-feet tall and had gold caps on his lower teeth, Bryant said.

Anyone with information about the robberies is urged to contact Detective James Borrico of the Bridgeport Police Department at 203-581-5294.