Dodd's poll numbers give the Greens one of their best opportunities to win a U.S. Senate seat, said Tim McKee, a state party spokesman. And this time, McKee maintains, Nader wouldn't be a spoiler -- something he was accused of in the 2000 presidential election.

"A lot of Democrats would be upset about the prospect (of Nader entering the race). But we look at it as (Dodd's) already lost the seat," said McKee, who believes Dodd won't be able to resurrect the popularity he's enjoyed over the years.

A Quinnipiac University Poll released Nov. 12 showed 54 percent of voters disapprove of the job that Dodd is doing, up from 49 percent in September. The same survey showed the five-term incumbent Democrat particularly vulnerable among unaffiliated voters, the largest voting bloc in this otherwise Democratic-leaning state.

Talk of Nader possibly entering the Senate race has heated up on the Internet in recent weeks. The Connecticut Green Party is stepping up its efforts to encourage Nader to run and has planned a rally for Friday afternoon outside the Noah Webster Library in West Hartford, where Nader is scheduled to speak at a book-signing.

The 75-year-old activist and lawyer, who divides his time between Winsted and Washington, D.C., released a new book in September, titled "Only the Super-Rich Can Save Us!," and is currently on a national book tour.

Nader is registered to vote in Connecticut.

"This is not about his ego or anything else. It's not really a draft effort. It's an effort to show him there is a lot of, a lot of support," said McKee, who is working with other party members to build a team of 100 grass roots volunteers for Nader.

As of the end of October, there were 1,824 voters in Connecticut registered as Green Party members, according to the Secretary of the State's Office.

Nader has not said whether he's willing to be a candidate. Several messages were left seeking comment through his publisher and Washington office.

McKee said he hopes the Green Party can help turn the Connecticut Senate race into a national race and encourage people from across the country to contribute to Nader's campaign. He estimates they'll need to raise at least $3 million to $5 million.

"We could be extremely competitive, and we think we could win," he said.

Gary Rose, a politics professor at Sacred Heart University in Connecticut, said the likelihood of Nader winning the Senate race in Connecticut is remote. But he said Nader would be a factor, likely drawing support from Dodd.

"I think that Ralph Nader at this point, he's an interesting candidate, yes, he has some die-hard following out there and some supporters but I think increasingly he has become old news in the minds of voters," Rose said.

Green Party members have their issues with Dodd. McKee said they believe Dodd hasn't done enough to push for universal health care or to withdraw troops from Iraq and Afghanistan. Also, the party is not happy with Dodd's role as chairman of the Senate Banking Committee.

"I think one of the reasons why Dodd is so vulnerable is, it's clear that he's in bed with the bankers and people are upset with that," said Charlie Pillsbury, co-chairman of the New Haven Green Party and a congressional candidate in 2002.

"The one thing that you can say about Ralph Nader is, he has been challenging corporate America his entire adult life," Pillsbury said. "He's somebody who I think people could trust and really rally behind."

Greenwich police blotter
- A 17-year-old boy from Greenwich was charged Nov. 19 with possession of marijuana, possession of drug paraphernalia and third-degree criminal trespass.

Church hosts Thanksgiving dinner for 130 seniors
Otto Carbino has been coming to the First Presbyterian Church on Thanksgiving for more than 10 years to enjoy a meal and entertainment that never fails to put him in the holiday spirit.

GMEA and LIUNA battle for hearts of union members
A behind-the-scenes turf war between two of the town's largest labor unions is putting the loyalties of one group's rank-and-file members to the test.

11/26/09 The Raw Greenwich News Feed: Greenwich Resident Ned Lamont Is In The News

Please send your comments, news tips and press releases to GreenwichRoundup@gmail.com
Posted by Greenwich Roundup at 11/26/2009 09:25:00 PM No comments: Links to this post

Horton is a Greenwich native who grew up in Riverside and now lives near Binney Park in Old Greenwich. Bob is returning to his journalistic roots. He started many years ago as City Hall reporter for the Torrington Register in northwest Connecticut and then moved to Washington, D.C. to write for States News Service. While in Washington he covered stories for papers in Connecticut and Alaska, and wrote a weekly political column that ran in several Connecticut papers.

Horton moved back to Greenwich in the late '80s. His family has generations-deep Greenwich history. His great-grandfather was an oyster fisherman on Long Island Sound and his grandfather was the town's tax assessor for many years. Both of his children graduated from the Greenwich public school system, and his wife Robin is a graphic designer and author of urbangardensweb.com, a blog that explores gardening and design in small spaces.

Needing to make a real living, Bob gave up journalism and pursued a career in marketing. He worked many years for Burson-Marsteller, a public relations agency, and was recently head of brand marketing for Merrill Lynch. He now works in commercial real estate in New York City.

Horton's column is scheduled to run Fridays in Greenwich Time.

In the most recent state standardized test scores, the Greenwich school district placed 40th out of 164, about as close to the middle as to the top. The middle is not a comfortable place for anyone, particularly anyone in Greenwich.

Standardized tests are just one yardstick of a school's performance, and arguably not the best one. After all, we want our schools to produce students who think independently and have had a chance to explore a wide variety of intellectual pursuits -- things not easily measured by standardized testing.

Another way of evaluating schools is through their budget and staffing priorities. Where do they spend money? What are they doing to prepare students to compete against, not just other Americans, but workers across the globe?

So putting aside the decline in test scores, let's compare two programs, both of which have received considerable recognition in recent years: Greenwich High School's football teams and the school orchestras.

I'm a big fan of GHS football -- the Cardinals have won numerous conference and league titles and are multiple winners of the state championship. If the team found itself with a so-so record, you can bet there would be changes made. Thankfully, that's not likely to happen anytime soon, judging from the resources put into the program.

The 46 boys on the varsity football team have a head coach and seven assistant coaches, according to Greenwich Cardinals' Web site. The JV team has two coaches .....

Please send your comments, news tips and press releases to GreenwichRoundup@gmail.com
Posted by Greenwich Roundup at 11/26/2009 02:20:00 PM 1 comment: Links to this post

11/26/09 The Raw Greenwich News Feed: Greenwich Resident Linda McMahon Is In The News

Please send your comments, news tips and press releases to GreenwichRoundup@gmail.com
Posted by Greenwich Roundup at 11/26/2009 01:28:00 PM No comments: Links to this post 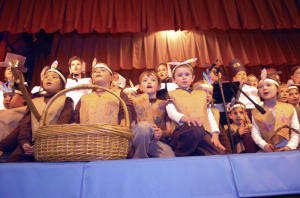 Greenwich schools got a head start on Thanksgivings Day this week, as many students participated in events such as plays and feasts. At North Mianus School, English as a Second Language students had had a pre-Thanksgiving feast. The kindergartners also partook in the festivities.
At Cos Cob School, students held a "Giving Thanks" feast with parents. Kindergartners dressed in Native American vests and headgear, as well as pilgrim costumes.
At Old Greenwich School, the second grade presented its annual Thanksgiving Play, a 20-minute production before the entire school in the gymnasium, part of a second-grade study unit on American heritage, with actors donning paper costumes that they constructed. Old Greenwich School students ........
Read More »
==================================
Please send your comments, news tips and press releases to GreenwichRoundup@gmail.com
Posted by Greenwich Roundup at 11/26/2009 09:24:00 AM No comments: Links to this post

Please send your comments, news tips and press releases to GreenwichRoundup@gmail.com
Posted by Greenwich Roundup at 11/26/2009 02:46:00 AM No comments: Links to this post