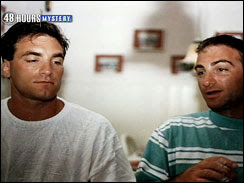 Blood And Money
By: CBS News

(CBS) This story originally aired Nov. 18, 2006. It was updated July 12, 2007. Forty-six-year-old Andrew Kissel hoped to make his name in real estate in Greenwich, Conn., but instead, as correspondent Erin Moriarty reports, he earned the dubious distinction as the town’s first murder victim in 2006.

Seven months after the murder, with no one yet in custody, Police Chief James Walters remains optimistic. "Everyone that was in Mr. Kissel’s circle is being is being investigated," he says.

But in this tony town, it’s not easy to get people to talk. "Within a few days after the murder everybody we wanted to talk had a lawyer," the police chief explains. Andrew Kissel’s violent death brought to an end a life once brimming with promise. He grew up in New Jersey, the oldest of three children in an upwardly mobile family. Andrew’s brother, Robert, was four years younger and there was a baby sister, Jane......

HEADLINE:
Teens Call for an End to Dating Violence
STORY:
...... violence in a number of ways. First, it is awarding a $1,000 challenge grant to a teen dating violence program at Greenwich High School the only other student-led dating violence program in Fairfield County, which adopted the model used at BMHS. If .......
Source: Greenwich Citizen
Source URL: http://www.norwalkcitizen-news.com/local/ci_4670757 (Dead Link)
Posted by Greenwich Roundup at 11/16/2006 06:35:00 AM No comments: Links to this post

HEADLINE:
Philadelphia Fed Factory Index Climbs in First Expansion in Three Months
STORY:
Manufacturing in the Philadelphia region expanded for the first time in three months in November as costs eased and shipments rose.
The Federal Reserve Bank of Philadelphia's general economic index rose to 5.1 this month from minus 0.7 in October, which was the lowest since April 2003. Readings below zero signal a contraction. The index has averaged 9.4 in the past year.......
...... prove to be a boon to consumers and also to the manufacturing sector,'' Stephen Stanley, chief economist at RBS Greenwich Capital Markets in Greenwich, Connecticut, said before the report. "As consumer spending picks up, manufacturing will .......
Source: Bloomberg
Publication Date: November 16, 2007
Reporter: Bob Willis bwillis@bloomberg.net
Source URL: http://www.bloomberg.com/apps/news?pid=20601103&sid=aq1wiDi4M8_k&refer=us