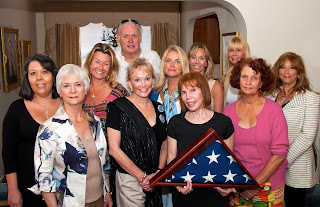 “Support the troops with more than lip service”

B.E.S.T. Benefit AUCTION to Give Troops a Fighting Chance

(Greenwich, CT – September 20, 2010) Can a major league batting helmet keep American troops safe? Only if it is worn by the B.E.S.T. winning bidder of a batting clinic with Derek Jeter or Doc Gooden. Neither baseball helmets nor standard Government Issue combat helmets for deployed troops are up to the job. The public is invited to find out more and come out to support the troops at the B.E.S.T. Benefit Auction and cocktail reception on October 15, 2010 in Greenwich. Proceeds from this annual event will support the front line troops defending our freedoms by ensuring that they have the best available equipment, including helmets and helmet liners, to improve their chances of making it home alive and in one piece.

Hosted by SFTT co-founder and Chair Eilhys England Hackworth and Scott Mitchell of Richards, and B.E.S.T. Chairs Shelly Tretter Lynch, a Greenwich resident, and Fred Tanne of Mt. Kisco, the President of SFTT’s Board of Directors, the B.E.S.T. silent and live auction and cocktail reception will be held at Richards, 359 Greenwich Avenue in Greenwich, from 6:00 PM to 9:00 PM on Friday, October 15. Beverages are being donated by B.E.S.T. committee member Terry Rogers of Horseneck Wine & Liquor in Greenwich, CT.

A sampling of the must have B.E.S.T. experiences that will go the highest bidder are a Soccer Clinic For Kids With Team USA World Cup Goalie Tim Howard; Going Hollywood: appear as an extra in a Lucas Foster movie, then walk the red carpet on premiere night; Dancing with the Rockettes; Crew an America’s Cup yacht in San Diego; Dinner for 10 at your place, prepared by Rao’s chef Dino Gatto; Batting Practice with Derek Jeter; Canadian Rockies’ winter escape to Whistler Resort; a California wine country getaway with private wine touring by Terry Rogers; Fashion Week 2011 tickets; Golfing at St. Andrews, at the Masters or closer to home in Westchester County; Super Bowl XLIV in Miami.

B.E.S.T. is the annual fundraising event of SFTT, a non-partisan, apolitical 501(c)3 educational foundation that relies on funding from individuals, private foundations and the B.E.S.T. event Auction. SFTT is a voice and advocate for America’s front-line troops. Its unique educational and advocacy mission is to see that the Pentagon and our elected leaders in Washington get the right equipment, training and leadership for our US troops by giving a public voice to and providing a candid forum for America’s front-line forces.

SFTT was founded by Col. David Hackworth and Eilhys England Hackworth to educate our country's citizens on the need to give a voice to our serving sons and daughters and to demand that they receive: Equipment superior to the best an enemy can employ against them; Training that fully prepares them to succeed in all assigned missions; Leadership dedicated to selfless service and the timeless values of duty, honor, and country. Through news breaking reporting on our website www.SFTT.org, which is regularly monitored and sought out by major media, SFTT has been instrumental in shining the bright light of public scrutiny on injustices from substandard body armor and other pieces of critical personal combat gear to anthrax vaccines to Abu Ghraib.

SFTT has been the source, credited and noted for recent front page articles and news segments in the New York Times and the Washington Post, Washington Times, 60 Minutes, NBC, CNN and other national broadcast news programs.

In spring 2009, an SFTT collaborative project with The Washington Times earned a Sigma Delta Chi Award for public service from the Society for Professional Journalists for the series of articles, "Disposable Heroes." It exposed the unethical treatment of vulnerable veterans of Iraq and other frontline duty during a Veterans Affairs medical experiment and resulted in a congressional hearing and major changes to the way the Dept. of Veterans' Affairs will conduct future medical experiments on America's veterans.

SFTT is a nonpartisan, apolitical 501(c)3 organization that is supported by donations from concerned individuals. More information can be found on the foundation website: www.SFTT.org.

A few of the B.E.S.T. Committee

The fourth annual B.E.S.T Benefit Auction and Cocktail Reception will take place on Friday, October 15 at 6 PM at Richards of Greenwich. The evening is hosted by SFTT Chair Eilhys England Hackworth, Scott Mitchell of Richards, B.E.S.T. Committee Chair Shelly Tretter Lynch and SFTT Board President Fred Tanne. Proceeds from the annual event support the front line troops defending our freedoms by ensuring that they have the best available equipment to make it home alive and in one piece. Former U.S. Senator Bob Kerrey will be presented with SFTT’s Support the Troops with More than Lip Service Award by former Marine Corps Commandant General Alfred M. Gray, Jr. USMC retired. Call 203-629-0288 or visit the SFTT Foundation website (www.SFTTorg).