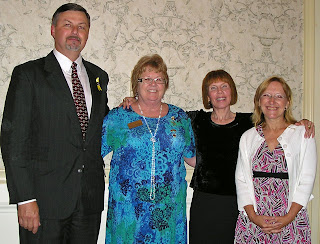 “Support the troops with more than lip service”

[New Haven, CT- July 17, 2008] Gold Star Wife Eilhys England of Greenwich, CT delivered the keynote opening speech this evening at the 2008 National Convention of Gold Star Wives of America, Inc. The gathering included Gold Star Wives from across the country, meeting this week in New Haven, CT, along with officials from the Veterans Administration in Washington, DC, and local and state officials.

Ms. England is the chair of SFTT, a nonpartisan, apolitical, nonprofit foundation. Its unique educational and advocacy mission is to see that the Pentagon and our elected leaders in Washington get the right equipment, training and leadership for our US troops ‘at the tip of the spear,’ by giving a public voice to and providing a candid forum for America’s front-line forces.

What distinguishes SFTT among the many excellent organizations concerned with the welfare of America’s soldiers is that SFTT is the only one making sure our frontline troops have the proper leadership and training and best equipment possible before and during deployment, to improve their odds of returning home alive and in one piece.

One notable exception is SFTT’s current work behind the scenes and in testimony before Congress last week, to let the public know about what the Washington Times termed Disposable Heroes: using unwitting Iraq and Afghan war veterans to test drugs with severe side effects that have led to suicide and psychosis.

Eilhys England spoke to her sister Gold Star Wives about SFTT’s current urgent focus on substandard equipment – including such basics as helmet liners and body armor – that is standard Government Issue and stressed the life and death importance of making sure that troops fighting for us are sent on their missions with the best available critical personal combat gear: helmets and helmet liners; body armor, rifle, sidearm; and boots. She also introduced John Grant, a father from Arkansas whose son is currently deployed to Iraq. Grant is the first volunteer president of SFTT’s new initiative, Families for the Troops, formed to give families of men and women serving in the military and returning veterans a forum for connecting and sharing information, under the SFTT umbrella.

SFTT was founded by Col. David Hackworth and Eilhys England Hackworth to educate our country's citizens on the need to give a voice to our serving sons and daughters and to demand that they receive: Equipment superior to the best an enemy can employ against them; Training that fully prepares them to succeed in all assigned missions; Leadership dedicated to selfless service and the timeless values of duty, honor, and country. Through news breaking reporting from the foundation’s Defense Watch webzine and its INTEL CENTER, which is regularly monitored and sought out by major media, SFTT has been instrumental in shining the bright light of public scrutiny on injustices from anthrax vaccines to Abu Ghraib to substandard body armor. SFTT and Defense Watch have been the source, credited and not, for recent front page articles and news segments in the New York Times and the Washington Post, the Washington Times and 60 Minutes, NBC, CNN, ABC and other national print and broadcast news programs. The 501(c)3 organization is supported by donations from concerned individuals. More information can be found on the foundation website: www.SFTT.org

Gold Star Wives of America, Inc. is a non-profit membership organization, chartered by the U.S. Congress as a unique organization. To be eligible for membership, your spouse must have died while on active duty in the U.S. Armed Forces or died from a service-related disability. There are currently 10,000 members nationwide, with over 60 active chapters.

GSW keeps members up to date on legislation that pertains to benefits, other topics or news of interest, and activities around the country and supports its Washington, DC efforts, which are vital to maintaining, much less increasing, the benefits available to the military widows/ers.

The Gold Star Wives of America Vision: We pledge to work diligently and unselfishly in the interest of all who have been called upon in a very personal way to share in the "last full measure of devotion" to our country and mankind. See the GSW website for more information: www.goldstarwives.org.

Eilhys England Hackworth (Greenwich, CT), SFTT Foundation (sftt.org) Chair and Gold Star Wife, delivered the keynote address on July 17th at the 2008 National Convention of Gold Star Wives of America, Inc. meeting at the Omni Hotel in New Haven. She spoke about urgency of making sure that frontline troops receive the best available critical personal combat gear: helmets and helmet liners; body armor, rifle, sidearm; and boots to improve their odds of making it home alive and in one piece. John Grant, father of a soldier serving in Iraq, introduced SFTT’s new volunteer driven initiative Families for the Troops.

SFTT (www.sftt.org) is the nonprofit, apolitical, nonpartisan legacy foundation started by the late Col. David ‘Hack’ Hackworth and Eilhys England Hackworth to give a voice to our serving sons and daughters, husbands and wives, and to demand that they receive the best available equipment, training and leadership.