06/07/08 Hey, Steve Weiss, This Is Why It Was Dangerous For The Greenwich Police To Use A Taser Three Times On A Greenwich High School Student

Police Officer Uses Taser On A Woman
Who Used Her Own Credit Card At Best Buy.

Since The Incident Didn't Happen In Greenwich:
You can watch The Surveillance Video!!!

Why Was This Best Buy Video

Yet, The Greenwich High School Video Was Not Released?
Shame on:

for not protecting the

Assistant States Attorney Steve Weiss doesn't want parents to see the danger that there children are in at Greenwich High School.

Because Assistant States Attorney Steve Weiss knows that tasers are weapons that can and have killed hundreds of times.

AP MERIDEN, Conn. - Meriden police say a 35-year-old city man has died after officers responding to a complaint about loud music shot him with a Taser gun ...

Shame on Greenwich Town Attorney For Refusing To Release The Video Of Carlos Franco Using A Taser On The Neck, Chest and Leg Of A High School Student Who Was Suspended Over Water Balloons.

Shame on Assistant State's Attorney Steve Weiss, the prosecutor has folded under pressure from the Greenwich Silver Shield Association - The Greenwich Police Department Union. That's why Victor's family continues to be punished with a $50,000 bail.

Survellance videos of taser use are often released, except in Greenwich, Several requests for the tape have been made by news agencies.

This boy is going before a judge not a jury.

Tell the judge not to watch the video.

Many many times the Greenwich Police Department has no problems about releasing video that features crime suspects, but now that the video features one of their own they have pressured Assistant State's Attorney Steve Weiss to suppress the video.

This video must be very bad and must show police misconduct for Assistant State's Attorney Steve Weiss to suppress the video.

It's impossible to predict what might become prejudicial in a law enforcement action.

Assistant State's Attorney Steve Weiss fails to understand that the goal is to protect the accused from the release of prejudicial materials.

The accused boy and his family
want the video released.
Assistant State's Attorney Steve Weiss is only trying to protect the Greenwich Police Department from charges of misconduct.

The citizens of Connecticut will never truly have justice as long as they have an Assistant State's Attorney like Steve "I Am Afraid Of The Silver Shield" Weiss.

The Board of Education has rejected Freedom of Information requests for a surveillance video of a Greenwich High School student being tasered by town police trying to arrest him at the school two weeks ago, Town Attorney John Wayne Fox said.

Fox said he and Assistant State's Attorney Steve Weiss, the prosecutor in the case, decided that a pending criminal case against Londono shields the footage of the incident from public release under the state FOI law......

The first floor rooms that are designated for Pre-K have sidewalks leading to the courtyard, but no doors. WHY? The original education specifications showed that each pre-k classroom was to have an independent door to the courtyard. These areas will become magnets for area ne'er-do-wells.

Why did Frank Mazza state that all the systems were running today? Isn't that just sucking up the dust and debris into those systems? Won't those systems need to be heavily cleaned before the building opens?

Why is the playing field sloped? It was supposed to be level. The only thing that looks good is the basketball court, which was put in by the Chickahominy Reunion Association.

The courtyard, on all drawings was to be landscaped, why then is it all concrete?

This parent does not see how this building will be legally ready for the kids come the start of school. There is just too much left to do.

06/05/08 Are Hamilton Avenue School Parents Getting Screwed By The Board Of Education? It is time for parents to connect the dots? 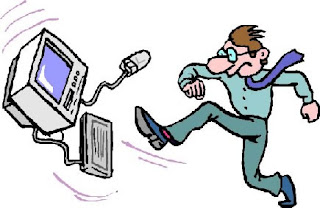 The Greenwich Citizen Web Site Has Not Been Updated

Looks like the Greenwich Citizen is having technical difficulties.

The Greenwich Citizen Finally Reports On The Glenville Principal Being Suspended

While the amateurs at the Greenwich Citizen attempts to get it's act together we recommend that you read the writings of a real journalist.
When is a Cupcake Not a Cupcake?
by Bill "The Scribe Of Greenwich" Clark

When it's an ice-cream cup? Or perhaps a birthday cake, as first reported? Or merely a "birthday treat", as whatever-it-was is now being called? Details are murky surrounding the suspension of Glenville Elementary School Principal Marc ...
Greenwich Gossip - http://greenwich-gossip.blogspot.com/ 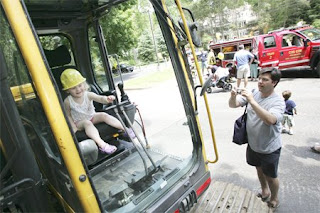 Cate Weidler sits at the controls of a large excavation machine and gets her picture taken by her dad during Sunday afternoon's Touch a Truck event sponsored by the Junior League of Greenwich and held at Greenwich High School.
Ties of mental and physical health are topic of talk

Ludwig Spinelli, chief executive officer of Optimus Health Care, Inc., will be speaking about "Integrating Behavioral Health and Physical Health Care" at the Southwest Regional Mental Health Board, Inc. annual meeting on June 12 at 3 p.m. in the Community Room at Norwalk City Hall. All are welcome. 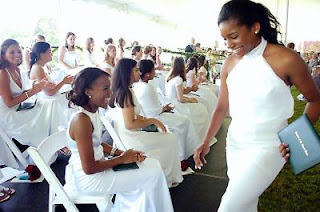 Amid her delighted classmates, Gillian Thomas returns from collecting her diploma yesterday at Convent of the Sacred Heart.
(Keelin Daly/Greenwich Time Photo)
Stylists are happy in Byram salon
Omar Roth, 37, and Rocco Palermiti, 28, owners of Salon O at 239 Mill St. in Byram have been cutting and styling hair since they were 17.
Convent of the Sacred Heart graduates 54
Convent of the Sacred Heart valedictorian Cristina Ceballos commiserated with fellow graduate Takako Hirokawa as the two embraced yesterday following the commencement ceremony
School survey a chance to make change
Parents, teachers, students and some community leaders have only a few days left to make their thoughts about the school district known to administrators.

Town expects search for new commissioner will cost $30,000
A national search for a new public works commissioner is expected to cost the town's taxpayers $30,000, according to human resources officials, who said it is money well spent.
Larvicide to target West Nile
The warm weather season is prime breeding time for mosquitoes. And with a prevalence of mosquitoes comes the threat of West Nile virus and other arborviruses, according to Michael Long, director of environmental services for the Greenwich Department of Health.

Man, tasered, dies after arrest
Associated Press MERIDEN - Meriden police say a 35-year-old city man has died after officers responding to a complaint about loud music shot him with a Taser gun when he became combative.
Sports field search team formed
Spurred by the recent defeat of a proposal to place two athletic fields at the former Cos Cob Power Plant site, a new group is working to identify potential locations for additional playing surfaces amid the growing demand from recreation organizations and teams.

Gas prices could jump after record cost of crude oil
Staff and wire reports Connecticut motorists, already socked with gas prices that are among the highest in the nation, may be in for even more woes at the pump.