Please see attachment for immediate publication with your agencies.

Beginning tomorrow July 24, a Greenwich Police Team made up of
current Police Officers and a few of their friends will be riding from
Boston, Massachusetts to White Plains, New York as part of the Tri-State
Trek (Tristatetrek.com) which is a bicycle ride to raise money for ALS
research.

ALS (Lou Gehrig’s disease) is a progressive disease that attacks the motor
neurons in the brain and spinal cord, which, in turn, affect the movement of
voluntary muscles. The disorder causes muscle weakness that can alter
speech, cause difficulty breathing and decrease movement in the arms and
legs. The majority of patients die from respiratory failure within 5 years of
the onset of symptoms. All of the money from the race goes to the ALS
Therapy Development Institute in Boston Mass. to fund their research.

The Greenwich Police team is riding in honor of Sergeant Roger
Petrone, an active Greenwich Police Sergeant, who has been diagnosed with
ALS himself. “I hope they find a cure because a lot of people’s lives are
counting on it,” says Sgt Petrone.

The ride passes through the northern part of Greenwich on Sunday July
26, 2009 and the steep hill on John Street is considered a challenge for the
riders. Supporters and cheerleaders will line the road to cheer and support
the riders and the cause. Greenwich Police will close John Street from

11am to 3 pm between Round Hill Road and Riversville Road. The
Greenwich Audubon Center on the corner of John Street and Riversville
Road will be a rest stop for the riders. The riders will gather there together
and then push off as a group to the finish line in White Plains, New York.
Donations can be made directly to the ALS TDI at the Audubon Center on
Sunday July 26 or sent directly to the research center at
http://www.tristatetrek.com/ Cowbells to ring and cheer on the riders will be
available at the rest stop for $5 on Sunday. 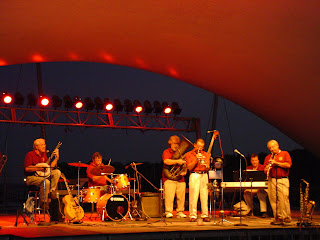 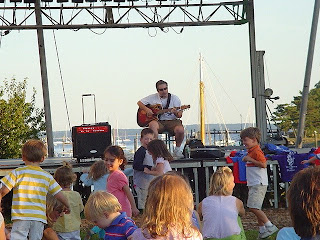 Here are the pictures. Hopefully, you can use some.

I will be on vacation next week so I am sending you the next few weeks of
press releases on the Parks and Recreation free concerts in the parks.

Thanks for your help in advertising these events.

I will send another email and attach some pictures.

The Department of Parks and Recreation announces that the Bear Cats Jazz Band will be performing at Roger Sherman Baldwin Park on Wednesday, August 5 from 7:30 pm to 9:00 pm.
Dick Van Gorder and Joe Hanlon for the purpose of preserving and promulgating one of America’s national treasures – traditional jazz, formed the Bear Cats in 1977. They perform for jazz societies and festivals in CT, DE, NY, NJ, PA, VA and Florida, and made their West Coast debut last August at Big Bear Lake in California.

The members of The Bear Cats are devoted and skilled musicians with a style firmly rooted in the New Orleans tradition and a flair also for the variations known as Chicago and West Coast.

The band appeals to a wide variety of audiences by easily migrating from a strict 1920s Louis Armstrong style with clarinet, tuba and banjo to a driving Eddie Condonesque, four-beater rouser with guitar and string bass. For dancing, the repertoire also reaches to Glen Miller, Tommy Dorsey, Ellington and Basie.

Bring the family, a picnic dinner and come join us for some wonderful Jazz music under the stars.

Other upcoming Parks and Recreation Wednesday night concerts are: In Harmony singing 50’s and 60’s Do Wop Music on August 12, and Sister Funk playing your favorite Rock, Pop, on August 19.

For more information please call Parks and Recreation at 622-7830, or visits are website at www.greenwichct.org.

COUNTRY BAND “GUNSMOKE” TO PERFORM IN THE DEPT. OF PARKS AND RECREATION
WEDNESDAY NIGHT CONCERT SERIES

The Department of Parks and Recreation announces that Gunsmoke, the award winning country band, will be in concert on Wednesday, July 29, from 7:30 pm to 9:00 pm at Roger Sherman Baldwin Park. The rain date is the next day Thursday July 30.

Gunsmoke hails from Fairfield County and was formed in 1982. The New York Metro Country Music Association has named the band Band of the Year six years in a row. Gunsmoke plays new country hits from the likes of Garth Brooks, George Strait and Alan Jackson. They also draw from the many styles they were raised on like Bob Wills swing, son of the pioneer trail songs Ray Price shuffles, Buck Owens twang, and Eddie Arnold classics to provide the audience with a diversified night of music. Gunsmoke is the band that entertained for President Bush when he visited Greenwich.

Bring a picnic dinner, blanket and the family to enjoy a wonderful concert under the stars.
Other Wednesday night concerts at Roger Sherman Baldwin Park will be: The Bearcats Jazz Band on August 5, And In Harmony singing Do Wop music from the 50’s and 60’s.

For more information please call the Recreation Office at 622-7830, or visit our website at www.greenwichct.org.

The Department of Parks and Recreation announces that IN HARMONY will be performing on Wednesday, August 12 from 7:30 pm to 9:00 pm at Roger Sherman Baldwin Park.

IN HARMONY is one of New England’s premier oldies groups. This sweet sounding vocal ensemble is comprised of three guys, and three women and a multi talented synthesizer/keyboardist.

The group consisting of Dee Heavrin, Robin Miller, Scott Poarch, Lenny Seiter, Adrienne Lisko, and Peter Randazzo have always found great joy in singing such classics as “At the Hop” “Be My Baby”, “I Wonder Why”, and “Duke of Earl”.

While performing together for many years the group has worked with such legendary Doo-Wop acts as Johnny Maestro & The Brookly Bridge. The Drifters, The Platters, and The Dimensions.

They were also called to perform at The White House for President Bill Clinton, and at the home of Terry Stewart, CEO of the Rock & Roll Hall of Fame in 1998. They have also performed an acappella arrangement of The Star Spangle Banner to a sold out crowd at Shea Stadium in 1999.

The Group has recorded two songs “Lonely Way, and “Come Back to Me” which can be heard on the Starlight Serenade 2000 Doo-Wop compilation CD.

Now is your chance to listen to this wonderful group in your own backyard in Greenwich, Ct.
Bring a picnic dinner, relax and listen to some wonderful music under the stars.

The rain date for the concert is Thursday August 13.

DEPT. OF PARKS AND RECREATION
JAZZ ON THE SOUND FINAL CONCERT
OF THE SUMMER

The Department of Parks and Recreation announces that the Jazz on the Sound Concert Series will hold its final concert of the summer on Sunday, August 9th. The concert will feature a Dixieland Jazz band which will play on the 4:00 pm Island Beach ferry, continue on the island and play again on the return trip 5:30 pm ferry.

Bring a picnic dinner, a blanket and come enjoy Dixieland Jazz at Island Beach.
This is your last chance of the summer to enjoy this wonderful event.

The rain date will be the following Sunday August 16.

For more information please call the Recreation Office at 622-7830.

The Department of Parks and Recreation announces that Family Movie Night will be outdoors at the Bendheim Western Greenwich Civic Center on Monday August 10. The rain date is Tuesday August 11.

The entertainment will begin at 7:00 pm with a children’s concert featuring Graham Clarke. After the concert at approximately 8:00 pm we will show the movie Kung Fu Panda on a large 9’ x 12’ screen. Come early, bring a picnic dinner (no barbecues please), a blanket, Frisbee, wiffleball and bat, and enjoy a movie under the stars.

For more information please call The Bendheim Western Greenwich Civic Center at 532-1259, or visit our website at www.greenwichct.org.

The summer is almost over and there is still time to help Fresh Air Fund children experience the summer they deserve. We are in need of host families for the month of August and I would like to ask for your help getting the word out on Greenwich Roundup.

Host families are volunteers who open their hearts and home to a child from the city to give them a Fresh Air experience that can change lives. Thank you so much.

And Now The Best Education Reporter In Greenwich......