Philip B. Korsant, the sole member of Morton Holdings and a former executive at Ziff Davis Investments, is also named as a beneficial owner in the filing. Korsant is an environmental activist and a board member of The Natural Resources Defense Council (NRDC).

Morton has substantial stakes in such companies as Cosi, Immunogen, and WebMD.

Fidelity Investment Management of Boston is the largest institutional shareholder with 18.44 million shares for 14.57 percent of the common stock.

Earlier this month, citybizlist reported that Equifax authorized the repurchase of up to an additional $150 million of the company's common stock, through open-market and privately negotiated transactions.

No ideology survives the collision with real-world politics perfectly intact. General principles have to bend to accommodate the complexities of history, and justice is sometimes better served by compromise than by zealous intellectual consistency.....
... It was also sadly typical of the political persuasion that Rand Paul represents.

This persuasion shouldn’t be confused with the Tea Party movement, whose inchoate antideficit enthusiasms Paul rode to victory last Tuesday. Nor is it just libertarianism in general, a label that gets slapped on everyone from Idaho milita members to Silicon Valley utopians to pro-choice Republicans in Greenwich.

Paul is a libertarian, certainly, but more importantly he’s a particular kind of a libertarian. He’s culturally conservative (opposing both abortion and illegal immigration), radically noninterventionist (he’s against the Iraq war and the United Nations), and so stringently constitutionalist that he views nearly everything today’s federal government does as a violation of the founding fathers’ vision.

This worldview goes by many names, including “paleoconservatism,” “the old right”. ...
....And it shouldn’t come as a shock that his son found himself publicly undone, in what should have been his moment of triumph, because he was too proud to acknowledge the limits of ideology, and to admit that a principle can be pushed too far.
Source: http://www.nytimes.com/2010/05/24/opinion/24douthat.html
==============================
please send your comments, news tips and press releases to GreenwicchRoundup@gmail.com
Posted by Greenwich Roundup at 5/23/2010 08:46:00 PM No comments: 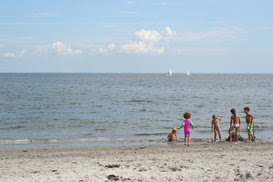 The roster of police cases seem to be adding up, and too quickly.

If it's true that things happen in threes, let's hope this is the end of dead bodies turning up in Westport.

There's been a rash of such unpleasant discoveries this spring: since January, three people have been found dead within Westport boundaries.

One evening just a week and a half ago, a body washed up on the beach, right in front of the playground. Police identified her as Michiko Kamhi, the Greenwich woman who'd gone missing while walking her dog in the area three weeks earlier and had been described by her family as suicidal.

I can't even imagine what that scene must have looked like. Or more accurately, I'd rather not imagine it: the bloated, unrecognizable body that had been in the water for the better part of a month. She was identified by her dental records, which says to me that she wasn't in good shape. It was ironic that she should have landed right in front of the playground, of all places. Thank goodness a child wasn't the one to discover her.

Maybe it's all a bit less horiffic since the three cases were investigated as suicides. It's gruesome and morbid, but at least were not talking about murders and crime scenes here.

Contrary to what most of us probably think, the police say this little cluster of suicides isn't all that unusual. These things are cyclical, explained Captain Sam Arciola of the Westport Police Department. We might see nothing for quite a while, and then suddenly there are gruesome discoveries left and right.

The other two victims, Joseph Wirsing and William Bleakley, were found dead at Mahackeno. What struck me was that none of the three were Westport residents. Two were from Wilton. One from Greenwich. You've got to wonder why they left their own towns and came here to end their lives? Were they hoping to spare their families and friends from being the ones to discover them?

Things like this aren't supposed to happen here. It doesn't fit with the Westport brand. But of course, it can happen anywhere. I'm reminded of the horrible crime in Cheshire, a scenic suburban Connecticut town where two young women and their mother were killed by intruders. That sort of thing wasn't supposed to happen in a place like Cheshire, either.

Innocence lost, I think about Kamhi's body now when I'm walking on the beach. I'm sure we all hope that there won't be a body number four and that we've seen the last of this little trend for a good long while.
Source: http://westport.patch.com/articles/csi-westport
PLEASE SEE:

But two candidates said they will challenge him in a primary on Aug. 10: Lt. Gov. Michael Fedele, who had about 30.5 percent of the delegates’ votes at the end of the first ballot, and R. Nelson “Oz” Griebel, who garnered about 17.3 percent.
=======================
Please send your comments, news tips and press releases to GreenwichRoundup@gmail.com

Candidates need 15 percent to qualify for a primary without petitioning their way onto the ballot.
Posted by Greenwich Roundup at 5/23/2010 05:58:00 AM No comments: