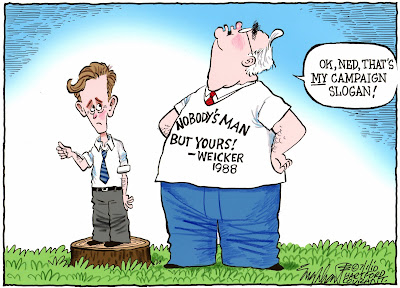 Since Monday Greenwich Roundup has informally interviewed 22 Greenwich Democrats and was shocked to learn that only 3 said that they were voting for Ned Lamont.

Nine Greenwich Democrats seemed unaware that that the Democratic primary was to be held in just six days.

The Greenwich Roundup poll has found that Greenwich Democratic voters are strongly committed to sticking with the party nominee.

It appears that Ned Lamont's only hope of squeaking out a win is in other more liberal metropolitan areas like Bridgeport, New Haven and Hartford.

Even though the the Greenwich Roundup poll probably has error margin of plus or minus 98% due to it's small size.
However this reporter / slash pollster was shocked that there was virtually no support for Ned Lamont in his own hometown of Greenwich.

The front runner in previous polls was Greenwich businessman, Ned Lamont who has a largely self-funding his campaign. Mr. Lamont has promised to use his business experience to fix Connecticut's stagnant economy and a projected deficit next year of $3.4 billion.

Dan Malloy who is a Stamford resident and an experienced elected official, is casting himself as ready to the do the job.
Dan Malloy was mayor of Stamford for 14 years and just received $2.5 million in public financing and has used that money to quickly close in on and possibly overtake the wealthy Ned Lamont.

Former Stamford Mayor Dan Malloy is coming on fast and hard in the last days of this primary election.

This has happened before. Ned Lamont spent $17 Million on his Senate campaign against Joseph Lieberman only to come out a loser in 2006.
The big question now is....
Will History repeat itself?

Political insiders are saying that Ned Lamont has probably spent 7 to 9 Million an a primary election that he just may lose in six days.
Maybe Ned Lamont still has a chance.

In the the final gubernatorial primary poll in 2006, when Stamford Mayor Dan Malloy was running against New Haven Mayor John DeStefano, Dan Malloy was down by 7 percentage points and then days later, Dan Malloy lost by 1.5 percentage points.
It looks like we will know if Ned Lamont wasted another 9 Million bucks on Tuesday night.
All told is looks like Ned Lamont will have spent well over 25 Million on two self funded Connecticut political campaigns.
That is an awful lot of money could have been used to feed a lot of hungry children or provided educational opportunities to the disadvantaged.
Anyway, Here Is The Latest News About Greenwich Newsmaker Ned Lamont ....

Watch live coverage via CTnow.com of the memorial service for Manchester shooting victim

In Connecticut's Forth Congressional District There Is A Merkle Melt Down In Progress
Here Is An Email Re ponding To Al Alper Who Is The Campaign Manager For Self Proclaimed Tea Party Candidate Rob "I Got High And Forgot To Vote" Merkle
You tell me which of the two emails provides for comic relief.

These guys are scary. I'm sorry, I play rough too, but I do try and use correct information whenever possible.
This clown is just making it up as he goes.
Is it any wonder that the average voter is turned off by the political process?
I will say this though, Al Alpert's creativity teacher in high school must be very proud.
He wins on this piece of political propaganda because now the campaign is forced to counter, yet again.
Do you remember back in early days of the Iraq war they had guy they called "Baghdad Bob " and " Comical Ali " ?
The guy was hysterical.
Same situation here.
His campaign is on it's deathbed and now all the crazy attacks come out from the woodwork.
Oh well, I'm off for a little round of golf, I'll catch you later.

We have remained above the fray while Rick, and the Torres camp has waged a
campaign of personal attacks on Rob Merkle and his deceased father – passing
video's to the press and saying his father got him off; video's too
professional for a campaign with little financial resources such as Rick's,
leaving unanswered questions about Rick and Debicella having conspired
together on this.
Several weeks ago we got wind of information that Rick Torres had not
received an endorsement by Star Parker.
Star not only hadn't been endorsing
any candidate, but her 501c3 (CURE) charter was being exposed as a result of
Rick posting a false endorsement by Star.
This seemed to be supported by
the fact that the "Press Release" issued by Rick in May didn't have a single
quote from Star – I encourage everyone to see it here
http://ricktorres2010.com/news/star-parker-endorses-rick-torres .

Since we don't traffic in hearsay, we set about finding out if there was any
truth to this through many channels. Following nearly two weeks of
investigation, on August 2nd @ 2:24pm EST, I personally called Telly
Lovelace, Star's Campaign Manager and spoke to him. He told me, and I
quote, "Star has not endorsed any candidates" – I encourage anyone to call
Telly themselves to verify this.

Frankly, the Torres campaign has been so beyond the pale that I don't even
believe the quote in the email below came from Star – even her name isn't
there but is instead masked with wingding font - "Congressional District. I
wish Rick the best and hope to serve with him in the 112th Congress." Star
Parker,, Candidate for Congress (CA-37)"

Even if Star did send it, and all indications so far say she has not, Rick
Torres is not a credible candidate.

To imply that "Merkle Smears Dismissed-Confirmation of Endorsement from Star
Parker" is typical of a campaign going down in flames; desperate for any
vote.

Who are you Amedexink@aol? Your ability to edit is extraordinary.

May I send things to you in the future as I am not as good at seeing the possibilities in expressing myself even in the middle of the day?

Thanks to you both. In my haste to get to a meeting, I hit send when I should have saved the draft. Great catch/good eyes Beverlee, thank you. We can always use new volunteers to add to the 150+ we already have on the team – that’s how we collected approximately 3200 signatures in 2 weeks ;)

When Rob wins on Tuesday, we’d welcome you to our staff for copy editing. Or, we’ll be happy to consider you sooner ;)

Beverly Dacey once again responds to Al Alper ....
Mr. Al,
Those with political savvy recognize that the 2 parties run the show, particularly here in the northeast (where our educated, elite liberals are prominent). Any hope for success with a conservative candidate is, in my estimation, unlikely with 2 candidates splitting the vote. If you want to convince yourself otherwise, that is your choice. My decision to support Rick Torres came from careful, thorough research and objectively listening to numerous speeches and the Wilton debate. None of the candidates were known to me prior to this spring.
My greatest fear for our nation is this current movement toward socialism with an emerging political elite that governs from self-interest and protecting their power. Only those Americans who have lived under communism or socialism recognize the current threat to our republic. My experience was living in Romania in 1982 as a Fulbrighter. Tyranny truly is a horror and one can never understand the concept of freedom until living in a world where it does not exist. I promised myself when I returned to America to live the rest of my life fighting to preserve our freedoms and a constitutionally-based government.
Rick is the ONLY candidate in all of the CT races who shares my experience living in a socialist society and has proven to have the courage and fortitude to stand firm against party politics to protect our rights. He affirmed these virtues by not courting the party establishment for convention votes and his extensive endorsements.
I respect your choice to support Rob and would appreciate your respecting my choice. Dissent and the ability to pursue public office are among the rights we strive to protect. Your invitation to join Rob's team next week is flattering, but must be declined. There is a manufacturing company I own waiting for me to get refocused.
Beverly
Rick Torress's Campgain Manager Efty Gregos Joined The Conversation And Sent A Message to Al Alper, Cathy Grippi and
Beverly Dacey ....
If Rob hates party politics then why did he try and get 40 votes at the convention? More importantly, why is his Campaign Manager an RTC Chairman.
It sounds like Rob is as close to the GOP as Dan Debicella. Especially given the fact that he was working with Dick Foley on the campaign (former State GOP Chairman).
http://www.youtube.com/watch?v=MnHSQ-grFQg
Look familiar? That candidate worked with Dick Foley, just like Rob Merkle.
http://www.youtube.com/watch?v=S7ZmBfhyJ4Y
What Made Rob Merkle's Campaign Manager Al Alper
Flip Out
With His Crazy Conspiracy Email Response?
Here Is The Original Email That Greenwich Roundup
Posted And Commented On ....

08/03/10 Rob Merkle Has A Real Integrity Problem. If He Is Not Getting High And Forgetting To Vote, Then He Is Lying To Local Tea Party Movement Folks

Will Rob Merkle Forget To Vote For Himself In The Republican Primary?
Are All Florida Pot Heads Pathological Liars? 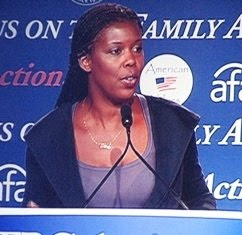 ROB MERKLE'S SMEARS DISMISSED: Here Is Confirmation Of The Endorsement From Star Parker
To all,
Today Star Parker and her campaign confirmed her previous endorsement of Rick Torres dispelling the repugnant charges from the remnants of the Merkle campaign.
Rob Merkle ran a spirited race but with the endorsement today of T.R. Rowe it is clear that Rick is the Conservative choice. I hope that we can all come together now around Rick Torres, the only Republican Candidate with more than 5 national Conservative endorsements.
Rick cordially invites any and all Rob Merkle supporters to his home this Thursday for his weekly BBQ where they will have the opportunity to learn for themselves how Rick intends to advocate for Conservative values.
The full text of the email from the Star Parker Campaign is below.
Eftychis John Gregos-Mourginakis
Campaign Manager
Rick Torres for Congress 2010
efty@ricktorres2010.com
http://www.ricktorres2010.com/
___________________

"It is unfortunate that my support of Rick Torres has evolved into an issue questioning the integrity of his campaign. Rick and I agree on many of the social and economic issues impacting communities from Connecticut to California. I support Rick in his race to represent the people of Connecticut's Fourth Congressional District. I wish Rick the best and hope to serve with him in the 112th Congress." - Star Parker

To All,
I am taking this opportunity to list Rick's impressive endorsements and most recent videos. I certainly welcome the Merkle Campaign to do the same for Rob.
We invite and encourage all tea party members to help us get the conservative vote on Tuesday for Rick by visiting his website, viewing his videos and participating in PHONE BANK FOR RICK. It's easy, quick and fun to use. Look forward to seeing you on Saturday at the Norwalk rally where we encourage tea party members to support Rick.
Regards,
Beverlee Dacey
Rick Torres vs. Dan Debicella: http://www.youtube.com/watch?v=QZkm2WtbqOI
Rick Torres on Socialism: http://www.youtube.com/watch?v=zfrkEtjIddQ
RICK'S ENDORSEMENTS
================================
Please send your comments, news tips and press releases to GreenwichRoundup@gmail.com
Posted by Greenwich Roundup at 8/04/2010 08:46:00 AM No comments: Links to this post