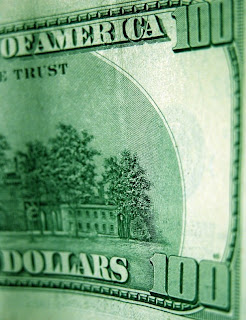 Search on for harbormaster

The town has set up a committee to screen candidates for the role of town harbormaster, a state-mandated post that is growing more vital due to increased boat traffic and other activities in coastal waters, First Selectman Peter Tesei said.

"People who live here spend a lot of time on the water, which may be part of the reason they chose a waterfront community like Greenwich," Tesei said. "There is a lot of work to be done in terms of dredging and maintenance of our marine facilities as well as accessibility to our harbors."

By the end of June the five-member committee will determine a candidate that Tesei will nominate to Governor M. Jodi Rell for appointment to the post, Tesei said.

Under state statute, harbormasters are charged with ensuring that navigable waterways are safe.

Harbormasters are appointed by the governor, serve three-year terms and receive $750 per year....

...For the past 11 years, town Director of Parks and Recreation Joseph Siciliano has been harbormaster in addition to his job duties.

Tesei said he decided not to renominate Siciliano, citing the need for the harbormaster to take a greater role in waterfront management for the town.

Storms, who is a member of the Indian Harbor Yacht Club, said he knows any number of boaters with the knowledge to serve in the post, but a significant time commitment is needed as well.

Another important task of the harbormaster will be to take part in the management of the Grass Island Marina.

"The characteristics would be the same as the successful applicant for almost any job," Storms said. "Judgment, maturity, interest, energy and enthusiasm."

Please send your comments to GreenwichRoundup@gmiail.com 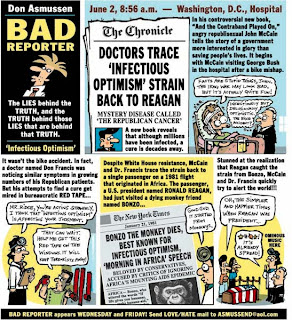 Where Is The Greenwich Citizen Editor?

Is He On Vacation, Or Something?

Has anyone even told the Greenwich Citizen That Principal D'Amico Apologized For Lying And Manipulating Public Documents.

06/03/08 One can't help, but to feel sorry for those defending Principal D"Amico - The confessed liar should be ashamed of what he did to Glenville

Reporting at the Greenwich Post
is such a joke.....

When a visitor to a small town in Georgia came upon a wild dog attacking a young boy, he quickly grabbed the animal and throttled it with his two hands.

A reporter saw the incident, congratulated the man and told him the headline the following day would read, "Valiant Local Man Saves Child by Killing Vicious Animal."

The hero told the journalist that he wasn't from that town.

"In that case," the reporter said in a huff, "the headline should read, 'Yankee Kills Family Pet'."

A shy guy goes into a bar and sees a beautiful woman sitting at the bar. After an hour of gathering up his courage, he finally goes over to her and asks tentatively. "Would you mind if I chatted with you for a while?"

To which she responds by yelling, at the top of her lungs, "No, I won't sleep with you tonight!"

Everyone in the bar is now staring at them. Naturally, the guy is hopelessly and completely embarrassed and he slinks back to his table. After a few minutes, the woman walks over to him and apologizes. She smiles at him and says, "I'm sorry if I embarrassed you. You see, I'm a journalist with the Greenwich Citizen and I've got an assignment to study how people respond to embarrassing situations."

A journalist walks into the hospital and tells the desk nurse, "I want to see the eye-ear doctor."

"There is no such doctor" she tells him. "Perhaps you would like to see someone else?"

No help. He repeats, "I want to see the eye-ear doctor."

They go around like this for a few minutes and then the nurse says: "Comrade, there is no eye-ear doctor, but if there were one, why would you want to see him?"

"Because," he replies, "I keep hearing one thing and seeing another."

Curious, a man walked over, bought a paper, and checked the front page. Finding nothing, the man said, "There's nothing in here about fifty people being swindled."

The newsboy ignored him and went on, calling out, "Read all about it. Fifty-one people swindled!" 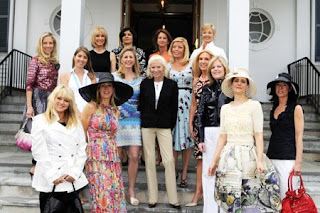 Greenwich Adult Day Care held its 14th annual garden party on May 1 at the Riverside Yacht Club. Event chair Sabrina Forsythe and her committee organized the event featuring a silent auction, luncheon and fashion show presented by Saks Fifth Avenue of Greenwich. All proceeds from the benefit directly impact the seniors and families that GADC supports.

Pezant to be honored Sunday

Dr. David Pezant, chief medical officer of the New York Fire Department, will be honored on Sunday, June 8, at the Greenwich Country Club from 5:30 to 7:30 for his testing of a serious lung disease called Alpha-1 in Sept. 11, 2001, emergency responders.

Why is the Greenwich Post failing to keep the single family home-owners of Greenwich and the Glenville School parents "posted" on the unfolding Principal Marc D'Amico story?

It Looks Like The Greenwich Post Could Not Report On Breaking School News, Because They Were To Busy Reporting On This Old News Story.....

United States District Court Judge Janet Hall handed Stamford resident Paul Kempner a partial victory this May by finding the town had violated his free speech rights by barring him from biking through Greenwich Point, but dismissed the rest of his suit, which claimed the entry fees violate the state Supreme Court’s 2001 ruling providing access to nonresidents, on summary judgment, and gave the town exactly what it was looking for.

Police Watch: The following are released reports of June 3

Nicholas Sikiotis, 18, of Stamford was arrested June 2 and charged with reckless driving, failure to obey an officer’s signal and failure to carry a driver’s license. Officers directing traffic at the intersection of Valley Road and Palmer Hill Road because of construction, and a car driven by Sikiotis came speeding toward the intersection. Police said Sikiotis ignored officer hand signals and commands to slow down and sped up before skidding on the road, forcing the officer to jump out of the way to avoid being hit. Sikiotis then allegedly attempted to flee the scene but his car was forced to a stop by construction vehicles. The officer caught up on foot and arrest him. Sikiotis was released on a $500 cash bond and is due in court June 16. 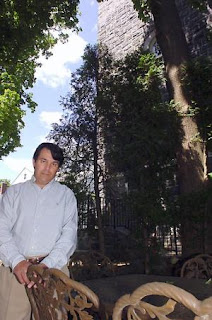 Robert Tramposch has problems with the Presbyterian Church's addition.
(Helen Neafsey/Greenwich Time photo)
Church leaves its neighbor in the dark
When Robert Tramposch bought his home on Lafayette Court three years ago, the dentist said he and his family thought they were getting a piece of heaven.

Resident prepped for Gobi March
When Greenwich businessman Thomas Gallagher returned from a 155-mile race through the Chilean desert last year, it took him more than a month to recover.

Locksmith marks 50 years in town
He runs a full-time retail store on Greenwich Avenue with a small army of locksmiths and technicians, but Charles Stuttig III still prefers cracking a locked safe to sitting around the office playing administrator and boss.

Stamford firm wins carting contract
A lucrative contract to do the dirty work of the town of Greenwich has been awarded to a Stamford carting company.
GHS trio runs relay in fight against cancer
For three Greenwich High School juniors, the time they spend volunteering with the school's Cancer Awareness Club means more than making banners, organizing fundraisers and participating in this weekend's American Cancer Society Relay For Life.