Please send your comments, news tips and press releases to GreenwichRoundup@gmail.com
Posted by Greenwich Roundup at 2/12/2010 10:37:00 PM No comments: Links to this post

Maybe some one spoofed you with a computer located somewhere on the west coast of the United States. It is now 1:29 in the Pacific time zone.

Someone might have wanted you to read something in Greenwich Roundup, but did not want you to know who sent it.

Greenwich Roundup doesn't know why they couldn't have been a little creative and made it look like Hearst Newspaper Editor David McCumber or Greenwich Time Cub Reporter Colin Gustafson.

However, you most likely signed up for some third party service that you forgot about and Greenwich Roundup is not not aware of. It Is hard to tell with out seeing the original email.

There are hundreds of third party services on the west coast including AOL, Google and MSN that will email you RSS feeds from blogs and websites.

Trust me if Greenwich Roundup was going to send you a link it would not have been the ones listed in your email.

Greenwich Roundup would have most picked this link.....

02/12/10 When It Comes To FOI Laws Gina Williams Doesn't Know Her Rear From A Hole In The Ground: Greenwich BOE Hands Over Two Anthony Byrne Memos

This is because Greenwich Roundup had to spend a week jumping through hoops to get the Anthony Byrne memos from the Greenwich Board of Education.

Greenwich Roundup's youngest son is a Sargent in the US Military and has survived three IED attacks defending Americans and the constitution of the United States.

When the Greenwich Board of Education had to bow down and turn over documents they wanted to be kept secret to a scalawag blogger it once again reminded Greenwich Roundup what a great country that we live in.

How fortunate we are to have brave young men and women who volunteer to put themselves in harms way and risk paying the ultimate sacrifice to protect our rights to hold government institutions accountable to the people.

Chinese bloogers that show up at the local Board Of Education and demand documents get a good old fashioned beating before being sent to hard labor in prison.

Anyway, if you read the email sent to you very closely you will probably find an unsubscribe link.

If you want to, you can track the original location of an email via its IP address.You can track email to it’s originating location by figuring out the email’s IP address and looking it up.

Greenwich Roundup found this to be quite useful on many occasions for verification purposes since I receive lots of emails daily due to my blog. Tracking the IP address of an email sender does require looking at some technical details, so be ready to dig your heels in!

There are basically two steps involved in the process of tracking an email: find the IP address in the email header section and then look up the location of the IP address.A Little research on the Internet will help you find the true sender of the email.

Greenwich Roundup hopes this information is helpful to you.

Ned Lamont In The Blogoshere:

Please send your comments, news tips and press releases to GreenwichRoundup@gmail.com
Posted by Greenwich Roundup at 2/12/2010 09:25:00 PM No comments: Links to this post

Please send your comments, news tips and press releases to GreenwichRoundup@gmail.com
Posted by Greenwich Roundup at 2/12/2010 08:26:00 PM No comments: Links to this post

02/12/10 When It Comes To FOI Laws Gina Williams Doesn't Know Her Rear From A Hole In The Ground: Greenwich BOE Hands Over Two Anthony Byrne Memos 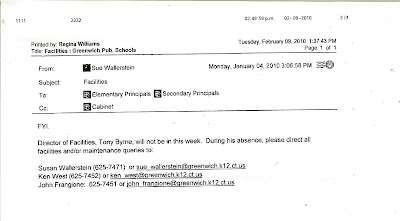 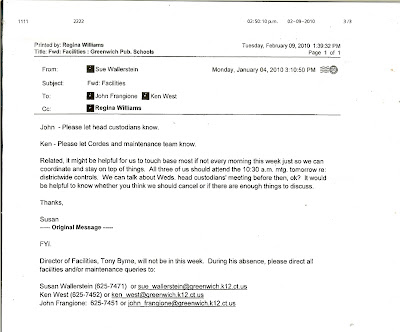 Click To Enlarge BOE Internal Memos
About Ex-Greenwich Board Of Education
Facilities Director Anthony Byrne
Greenwich Board Of Education Hands Over Byrne Memos In An Effort To Avoid A Lawsuit From The State of Connecticut - Freedom of Information Commission
Sidney, Sidney, Sidney.......
If Greenwich Roundup said it once he must have said it a hundred times.
"The Coverup Is Always Worse Than The Crime"
Dr Frued and a bunch of failed administrators have been saying that there was nothing unusual with Anthony Byrnes departure.
Mr. Byrne simply decided to voluntarily go in administrative leave for three months and then retire early from the Greenwich Public School System.
Dr. Freud wants everyone to believe that everything was done in an orderly and smooth fashion and Mr. Byrne gave proper notice to him.
But Susan Wallerstein's July 4th memos seem it indicate that the were not so smooth and planned out in advance.
As you can see from the first memo, on January 4th at 3:06 in the after noon Ms. Wallerstein informs all school principals and the BOE cabinet only that ....
"...Byrne, will not be in this week."
There is nothing mentioned about Byrne applying and going onto three months of administrative leave with $30,000 in pay.
Apparently on January 4th, no deal had yet been made concerning Mr. Byrnes $30,000 Taxpayer funded vacation.
Then just a little before midnight, Ms. Wallerstien appears to get nervous and fires off an email directing John Frangione to tell the head custodians that Anthony Byrne would not be showing up for work the next morning.
It looks that Anthony Byrne did not have any long sad goodbyes with his longtime maintenance coworkers....
Susan Wallerstein's late night memo was also carbon copied to Gina Williams who fought touth and nail trying to prevent the email's release to Greenwich Roundup.
If Gina Williams Was Listed In The Anthony Byrne Email, Should She Have Been Handling The FIO Request Concerning It's Release.
Greenwich BOE Staffers Tell Greenwich Roundup That Gina Williams Rarely Handles FOI Requests, If She She Even Handles Them At All.
Maybe, Greenwich Roundup Should put a FIO request in for Anthony Byrne's resignation letter, because we all know that Greenwich Time Cub Reporter Colin "THE BOE BROWN NOSE" Gustafson wont have the journalistic balls to follow the paper trail in this coverup.
It might be interesting to see what it Anthony Byrn's resignation letter says.
Five will get you ten that Byrne's resignation letter and HR forms applying for administrative leave were not submitted before January 4th.
The Unconfirmed Rumor In Town Is That Byrne Matter Is Being Covered Up, Because He Threatened To Expose Improper Conduct On Frank Mazza's Hamilton Avenue Building Committee
PLEASE SEE:
01/26/10 You Wont Read This In The Greenwich Time; Key Figure In School Mold Fiasco was escorted from his job at the Greenwich BOE
01/27/10 Greenwich Diva Starts To Cover The Story That Hearst Newspaper Editor David McCumber Is Afraid To Touch
01/29/10 Another Greenwich Blogger Starts To Cover THE BOE Scandal Involving Tony Byrne
PLEASE ALSO SEE:
02/05/10 He Said She Said At The Board Of Ed
Often Times The Cover Up Is Worse Than The Crime
Superintendent says: 'No misconduct' in Byrne retirement
He Said:
“It has come to my attention that the news media has been provided with false and/or misleading information regarding Anthony Byrne’s employment status with the board,” Dr. Freund said in his statement. “Mr. Byrne is currently on leave pending a voluntary retirement when he reaches eligibility effective April 1, 2010. Mr. Byrne has not been terminated and there has been no finding that he engaged in any misconduct in the course of his employment by the board.”
She Said:
According to district Director of Communications Kim Eves, Mr. Byrne was placed on leave with pay Jan. 4.
He Clamed Up:
Asked why he was placed on leave, Dr. Freund said he couldn’t comment because it is a personnel matter......
Just Three More Links:
02/08/10 Kim Eves Has Time To Send An Email Saying That Schools Will Be Closed, But She Can't Respond To A 5 Day Old FOI For The Byrne Memo
02/09/10 To Avoid A Lawsuit The BOE Sends An Acknowledgement After Gina Williams Ineptly Handles Greenwich Roundup's Anthony Byrne FOI Request
02/10/10 Greenwich Roundup Once Again Catches Colin "BOE BROWN NOSE" Gustafson In Once Again Inaccurately Reporting The News
The Failed Administrators At The Board Of Education Just Wont Tell Taxpayers The Truth About Their Children's Schools
==================================
Please send your comments, news tips and press releases to GreenwichRoundup@gmail.com
Posted by Greenwich Roundup at 2/12/2010 02:47:00 PM No comments: Links to this post