1/6/09The New York Times Will Allow Front Page Ads Like The Greenwich Time Does?...... Will Anoying Stickers Soon Appear On The Front Of The Gey Lady? 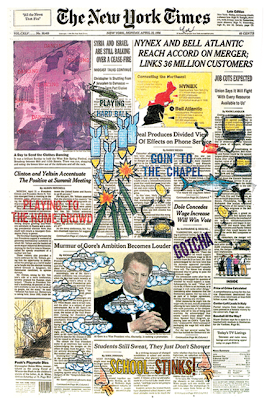 NOTHING IS SACRED ANYMORE

GREENWICH RESIDENTS ARE SHOCKED TO FIND A CBS TV AD ON THE FRONT OF THEIR NEW YORK TIMES NEWSPAPER:

WHAT IS THE WORLD COMING TO.....
FIRST GRENWICHITES GET WIPED OUT BY BERNARD MADOFF AND WALTER "FEEDER FUND" NOEL.
NOW THE GREY LADY HAS ADS ON THE COVER - NOTHING IS SACRED ANYMORE !!!!

Times' Cover Ads Go For $75,000 - Plus
New York Times Publisher Arthur Sulzberger Follows Greenwich Time John Dunster's Lead And Smashes "The Paper Of Record's" Chinese Wall Between News And Advertising
One Of Greenwich Roundup's Clients Who Is A Greenwich Resident And Media Buyer Says That The New York Times Is Shopping Ad Space On It's Front Page For $75,000 On Weekdays
The Grey Lady finally made the decision to break away from the longstanding tradition and sell front page ads - starting with yesterday's edition - as it tries to cope with a serious ad slump and growing debt.
Like the Greenwich Time, most major newspapers, including USA Today and the Wall Street Journal put ads on their front pages, in the same manner as Hearst Newspaper's Greenwich Time property does.
TV Network CBS was the first advertiser to take advantage of the prime placement - a two and a half-inch deep horizontal strip across the bottom of the front page - in yesterday's paper.
The open rate for a national New York Times full page ad starts at $140,000.
Apparently, The Times is leveraging the front page space to get big national advertisers to increase their ad buys.
The paper is limiting the front page to big advertisers willing to spend more on top of their existing budgets.
A new advertiser who wants access to the space has to commit to buying the ad 36 times during the year - for a total of almost $2 million, according to our ad buyer friend.
Business reports have previously said that the Times ad revenue fell 21% in November.
The papers problems are exasperated by over $1 billion in debt.
Other business news reports says the company plans to sell or mortgage its headquarters in an effort to raise $225 million.
The times has also slashed its dividend by 75%.
Other business reports have documented the Times is laying off workers in order to save cash.
Recently, the paper has also trimmed the size of its front pages to cut paper and printing costs.
COMMENT:
This is indicative of newspapers becoming more flexible.
Will the Greenwich Newspapers start to increase the amount of ad space on their front pages?

1/6/08 Bruce Hunter Is In The House: Who let these news dogs out? --- Look AT All The News That's Up Before 1 AM At The Greenwich Time 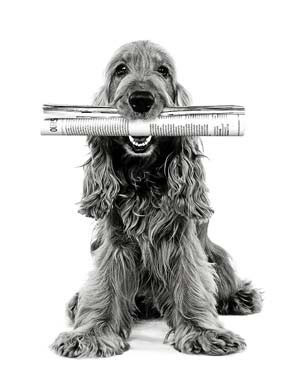 What's Next?
First It Was Turkeys Now It's Dogs...

People at Point barking over loose dogs
Dogs running off leash with owners neglecting to pick up after them is frustrating some Greenwich Point users, who pine for the pet-free summer months.

Officials nab student with knife at GHS
A 17-year-old Greenwich High School student faces a felony charge and expulsion after his arrest for bringing a knife to school, police said.

Local tax payments may boost economy
It was a December to remember for Tax Collector Louis Caravella. Caravella's office took in $23.6 million in property tax payments last month alone, a 51 percent increase from the $15.

UST HQ will leave Stamford
STAMFORD - The headquarters of UST Inc. is slated to leave the city this year after tobacco giant Altria Group Inc. completes its purchase of the smokeless tobacco maker this week, according to sources.

Town jobless rate on the rise
Rising unemployment in the final months of 2008 has put the town on track to seeing its highest level of joblessness in 16 years, with local unemployment climbing 40 percent in a 12-month period.

Police blotter
Brian Jendraszek, 44, of 7 Cypress Lane in Ridgefield, was arrested Sunday night and charged with third-degree assault, risk of injury to a minor, disorderly conduct and interfering with a 911 call, police said.

UPDATE:
Even More News
From The Greenwich Time

More women may have been secretly photographed by Stamford train station janitor
STAMFORD - A train station janitor accused of spying on the women's bathroom in the Stamford station may face additional charges, the prosecutor said in state Superior Court.
Himes sworn in to U.S. House
WASHINGTON - The rapid ascent of Jim Himes from former Greenwich finance board member to U.S. congressman reached new heights Tuesday, with the 42-year-old Democrat casting his symbolic first votes representing Connecticut's Fourth District in the U.S. House.
School applications expected to jump
Public school officials are expecting to receive a record number of applications for magnet schools for the upcoming school year, when the district's fourth such program will be unveiled at New Lebanon School.
Greenwich gymnastics aiming to ride depth, camaraderie
The Greenwich High School girls gymnastics team has a simple recipe for success: depth and camaraderie.

Movie Clock Thursday, Jan. 8-11
BEDFORD, N.Y. Clearview's Bedford Playhouse, Route 22, (914) 234-7300 The Curious Case of Benjamin Button: Thu: 12:45, 4:30, 8:15; Fri: 4:30, 8:15; Sat/Sun: 12:45, 4:30, 8:15 Gran Torino: Fri: 4, 7, 9:40; Sat: 1, 4, 7, 9:40; Sun: 1, 4, 7 The Tale of Despereaux: Thu: 4:45, 7 BETHEL Bethel Cinema, 269 Greenwood Ave.
Club owners find a good fit in gym
The local owners of the new Underground Fitness club in the Glenbrook Shopping Center in Stamford said they hope to lure the New Year's resolution-makers from the chain-run gyms during an era of consumer penny-pinching.
WOW !!!! Todays Greenwich Time Editoraial Actually Uses The Word "GREENWICH" Two Times: "Pool safety should a be a top priority"
Shame on any owner of a public pool in Fairfield County who is struggling to comply with a new law that requires placement of a safety device over drains to prevent swimmers from getting trapped and drowning.
This is basic safety, and it should not have taken a law to make pool operators take the simple step necessary to protect swimmers, especially children.
It's dismaying that so many local pool owners are scrambling to comply with the law before swimming season opens......
......And we in Fairfield County tragically became all too aware of the danger when on July 28, 2007, Greenwich 6-year-old Zachary Cohn drowned in his family's swimming pool. His arm became stuck in an intake valve on a wall at the deep end.
In fact, we'd suggest that while the government is making drain covers a requirement for public pools, they be mandated for private ones as well. After all, the government forces us to take other personal safety measures. If it can make people wear seat belts, it should be able to make them keep their pools safe.
Several pools in Stamford, Greenwich and Norwalk have been given additional time to comply with the rules. But municipal officials say seasonal pools will have to be compliant before they can open in the spring.
Parents would do well to make sure for themselves before their kids dive in. Drain entrapments might be statistically rare, but something so easily avoidable should never happen at all.
Tolls would present too many problems
To the editor:
One must wonder why the state is considering tolls on the highways.
Have officials considered the cost of constructing toll plazas, and paying toll collectors and additional state police to enforce tolls? Are we not still paying the cost for pensions, health care and other benefits for the collectors let go from the previous system.
What about congestion and delays during the construction phase, and how long before tolls are collected? Knowing how government works it will be 10 years before there is a stream of income.
Then the funds will be like the federal gas tax. Instead of being used for the intended purpose, they will siphoned off for something else. Does anyone remember what the lottery was to fund?
It all sounds fine and dandy until some politician figures how to get the money to something it was not intended for.
The best way to relieve congestion is a higher gas tax to make the cost higher, use the funds to improve intercity transportation, and get the federal government to leave its greedy hands off the funds for highway improvements.
Beware of wolves in sheep's clothing.
Frank De Nicola
Cos Cob
================================================================
Please send your comments to GreenwichRoundup@gmail.com
Posted by Greenwich Roundup at 1/06/2009 01:39:00 AM No comments: Links to this post