Who's picking up those political campaign signs?
Political signs that popped up like flowers after a spring rain during the hopeful pre-election days become little more than political collectibles and detritus once the votes are cast.
Read More »

Officials bust two stores for selling cigarettes to minors
Employees at two stores were ticketed Tuesday for selling tobacco to minors after town and state officials conducted an undercover operation. An employee from the Tobacconist of Greenwich, at 8
Read More »

Town man continues fight with church
A town dentist is casting himself as a David-like figure versus a church Goliath in his continuing legal battle against the First Presbyterian Church.
Read More »

Homebuyer tax credit extension not likely to impact Greenwich, agents say
While Realtors across the country are cheering the likely extension of the $8,000 federal tax credit for first time homebuyers, set to expire at the end of the month, the move has been met with a yawn in Greenwich, where it hasn't seemed to make much of a dent in the market. Read More »

Please send your comments, news tips and press releases to GreenwichRoundup@gmail.com
Posted by Greenwich Roundup at 11/04/2009 04:43:00 PM No comments: Links to this post

Please send your comments, news tips and press releases to GreenwichRoundup@gmail.com
Posted by Greenwich Roundup at 11/04/2009 03:20:00 PM No comments: Links to this post

11/04/09 If You Want To Know What's Going On In Greenwich, Then You Have To Read The Out Of Town Newspapers 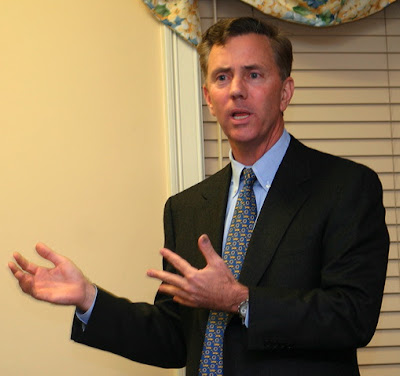 Democrat Ned Lamont Exploring A Run For Governor In 2010
Hartford Courant
In a move that sharply changes the dynamics of the governor's race, Greenwich entrepreneur Ned Lamont announced Wednesday that he is opening an exploratory committee for governor.
Lamont, who spent about $16 million of his own money to run for the U.S. Senate against Joseph I. Lieberman in 2006, would clearly be the wealthiest candidate in the race. The other Democrats have started down the path of seeking public financing and would be limited to $1 million in public funds for an August 2010 primary. The winner of a potential six-way primary would then receive $3 million in public money for the general election.
If Lamont spent only half of what he spent in 2006, he would clearly outspend all other candidates in the race.
Republican Gov. M. Jodi Rell has not made any formal announcements, but she has formed an exploratory committee that is raising small amounts of money under the public-financing guidelines. With far higher name recognition than the pre-Lamont Democratic candidates, Rell has had the luxury of delaying any official announcements. Her supporters concede that her name recognition has given her a multi-million-dollar advantage over the Democrats who have been in the race so far.
Lamont, though, has high name-recognition statewide, particularly in the Republican strongholds of Fairfield County that have provided votes for the last three governors - Rell, John G. Rowland, and Lowell P. Weicker, Jr. The Democrats have not won the governor's race since 1986 - a drought that will stretch to 24 years by next year's election.
"As I have continued to meet with citizens across our state over the last three years, as co-chairman of President Obama's Connecticut campaign and on behalf of health care reform, I have been constantly reminded that Connecticut is not living up to its potential and that too many of our families are being left behind," Lamont said in a statement.......
......Like businesses, states thrive with strong executive leadership, and they fall behind with weak leadership. As measured by the loss of jobs, young people leaving our state, and the never-ending budget crisis, Connecticut's chief executive is simply not getting the job done."
Currently, Lamont is chairman of Campus Televideo, a firm that he created after moving to Greenwich more than two decades ago. Originally called Lamont Television Systems when the young Lamont was serving on the Greenwich board of selectmen, the company has had various names through the years.
He is also currently teaching political science and overseeing a policy center at Central Connecticut State University in New Britain.
Lamont is planning a speech at CCSU on Thursday that is entitled: "An Entrepreneur's Approach to Government: Businesses reinvent themselves all the time; Why am I still waiting in line at the DMV?''......
==================================
Please s4end your comments, news tips and press releases to GreenwichRoundup@gmail.com
Posted by Greenwich Roundup at 11/04/2009 02:29:00 PM No comments: Links to this post

11/04/09 If You want To Know What's Really Going On In Greenwich, Then You Have To Read The Out Of Town Newspapers: Greenwich Housing Prices Going Up? 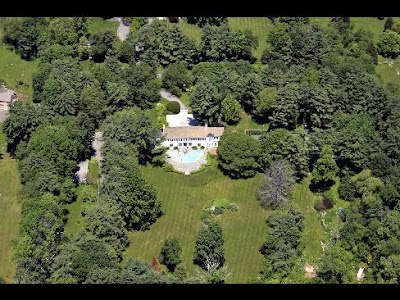 Real estate investor Barry Sternlicht is betting the Greenwich, Connecticut, housing market is making a comeback.
Sternlicht, who helped build Starwood Hotels & Resorts Worldwide Inc. and took his real estate investment company public this year, raised the asking price of his 5.8-acre estate there to $5.95 million, even as the town is headed for its worst year for property sales in more than three decades.
“We increased it because we felt like we were giving it away,” and there was interest in the property, Sternlicht’s broker, Jean Ruggiero of William Raveis Real Estate, said in an interview. “Just because people are lowering their price doesn’t mean it’s right, because he’s not a desperate seller.”
Sternlicht, 48, raised his price 8.3 percent from $5.495 million as single-family home sales in Greenwich slid 40 percent to 245 this year through September, according to data from local broker Russell Pruner, owner of Shore & Country Properties. As prices fall and inventory rises in the town, which is home to more than 100 hedge funds, Sternlicht’s Starwood Property Trust Inc., raised $810 million to invest in distressed commercial and residential real estate debt.
Sternlicht was chairman of Starwood Hotels, the third- largest U.S. lodging company, from 1997 to 2005 and has been chief executive officer of closely held investment firm Starwood Capital Group LLC since its founding in 1991. He’s also chairman and CEO of Starwood Property Trust Inc......
==================================
Please send your comments, news tips and press releases to GreenwichRoundup@gmail.com
Posted by Greenwich Roundup at 11/04/2009 12:44:00 PM No comments: Links to this post