It can be tough to be one of those too-perfect Connecticut towns.

In Greenwich, Wifflegate came to a rancorous, well-publicized close on Friday morning as a town demolition crew using sledgehammers and crowbars knocked down the offending Wiffle ball park built by local youths, providing ample grist for meditations on suburban mores, modern parenting, the tyranny of lawyers and the phrase Greenwich Mean Time.

Sixty-three miles up Interstate 95, in this affluent little seaside town, which some locals like to think of as Greenwich in a lower gear, the fly in the punch bowl is a sprawling exercise in police corruption that’s been dragging on for almost two years. In a town of 18,000 with virtually no violent crime, 8 officers, so far, on a force of 24 have been accused of taking part in or turning a blind eye to crimes including burglaries, the electronic stalking of women, sex with prostitutes and worker compensation fraud. It’s like a low-life Elmore Leonard novel transported from Detroit to Martha’s Vineyard that began when an officer was caught on a surveillance camera removing bags of lobsters from Lenny & Joe’s Fish Tale, a popular local restaurant.

It’s a reminder that, as any marketing person will tell you, the glossier the brand, the farther the bad news travels.

“The first feeling people have is betrayal that people we trusted have dishonored us and stabbed us in the back,” said Alfred J. Goldberg, a former hospital administrator and a Democrat, elected first selectman, a post akin to mayor, a year ago in this heavily Republican town, partly in response to the police scandals.

“The second is that they’re upset by the besmirching of this community’s reputation. They hate it when they go someplace and people say, ‘Oh, you’re from Madison. Those guys grab any butter to go with the lobster?’ Or ‘You don’t have to pay those cops a lot with those fringe benefits.’ People hate it. They’re so proud of this town, they hate having to suffer the slings and arrows of cheap insults.”

At least Greenwich usually gets in the news for mini-dramas bordering on self-parody — asking the state for emergency aid because of the influx of cars from New York coming to buy Powerball tickets, civic hysteria over goose droppings, keeping outsiders off the town beach, knocking down a Wiffle ball field.

Madison, settled in 1641, is a much more low-key place, known for its New England atmospherics and its lovely beaches, where some are happy to be compared with Greenwich and many are not. The coffee shops on Boston Post Road tend to be local and independent. One of the nation’s most admired independent bookstores, R. J. Julia Booksellers, sits across the street from the esteemed Madison Art Cinemas (coming Aug. 1: “Brideshead Revisited”). The local library has a big sign out front reading “Art to Benefit the Blind.” On the other hand, the most conspicuous local industry is wealth management.

But Madison’s bad news has had real-world consequences — consequences that include the $337,420 in legal fees last year alone relating to the eight officers fired, suspended or facing charges; the residents who think twice before calling the police; and the effects on the justice system. One man involved in a drunken-driving death avoided possible prison time in April because a police officer who investigated the case had been recently fired in the wake of the prostitution investigation. The prosecutor figured the officer would not make much of a witness.

Mr. Goldberg, who was elected after riding his bicycle to knock on 1,523 doors, said it had been painful, but people expect the town to uncover every stone, and the end of the investigation is in sight. That’s the good news. The bad news is that a hearing at the end of the month will examine the actions of a widely admired police lieutenant. And the hearing after that concerns the suspended police chief, Paul Jakubson, and will probably reprise every bit of dirty laundry and then some. Mr. Goldberg said that Chief Jakubson, like all the others under investigation, deserved the presumption of innocence and that it would be a mistake to lump the town’s good officers with the dishonorable ones. But he also said there was no guarantee other officers wouldn’t be implicated.

Still, in town, the police scandals have dragged on for so long, and enough new officers have been hired, that many people seem to have already moved on. “People are disgusted, but there’s a sense it’s being taken care of,” said Arnold S. Gorlick, owner of the cinema.

Mr. Goldberg, a history buff with a picture of James Madison behind his desk, frets about the scandal’s legs. “People have had friends and relatives as far away as New Zealand who’ve heard about the Madison police,” he said. “They come back from Asia and say it was on Bloomberg Asia that day.”

It’s all pretty mortifying. Still, he sighed, “It was the lobster that really got everyone’s attention.”

Maybe if they’d stolen plumbing supplies, no one outside town would have paid much attention.

... solely within Manhattan, he is also spreading his wings geographically. Next year he will open a restaurant in Greenwich, Conn.-the first of several planned for outside the city. At the same time, he is moving into the mass market. Two weeks ago, he ...

...Meanwhile, Mr. Swinghamer will be overseeing the opening of more Blue Smoke and Shake Shack restaurants at the expected rate of one each per year. The second Shake Shack will debut on Manhattan's Upper West Side this year.

Next up will be the eatery in Greenwich, which will be officially dubbed the Blue Smoke Chop House.

Mr. Meyer is also open to other possibilities.

"When there's an opportunity that allows me or any of my colleagues to pursue our passions and make money, we will entertain it," he says.

07/21/08 Greenwich Wedding - First dance: "Ain't No Stoppin' Us Now" by McFadden and Whitehead

It was breaking news when Katherine Pushkar and Eric Barrow tied the knot. The bride, the features editor at the New York Post, and her groom, the deputy Sunday sports editor at the Daily News, enjoyed a journalism-themed wedding with a save the date that featured an illustration of the couple each reading the other's paper announcing their engagement.....

... 150 guests that joined them in Greenwich, Conn., for the church ceremony and reception at the Riverside Yacht Club. "He makes me feel like I'm always walking around with a big hug about me," says the bride ...

...Honeymoon: A European jaunt, with visits to the Italian Riviera, the South of France and Barcelona... 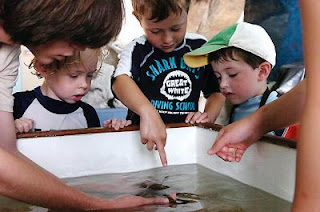 Trevor Silvia, 5, reaches bravely into the touch tank as Seaside Center naturalist Max Barresi holds a crab for him while James Schwind, 3, and Cole Silvia, 3, wait to see what will happen.
(Keelin Daly/Greenwich Time photo)

Holding a large horseshoe crab, Christian Ruf, 8, learns that the sea-faring creature has been around for millions of years and is not actually a crab, but a member of the spider family.

Call it a triumph of brains over brawn. The region consisting of Stamford, Bridgeport and Norwalk has the highest average gross domestic product per capita in the country, according to a new economic study from the Federal Reserve Bank of New York.

Depending upon whom one asks, there are two debates on the calendar between Democratic congressional hopefuls Jim Himes and Lee Whitnum in the 4th District before their Aug.

Jumping hurdles, doing box jumps, and walking up on a revolving ladder are just some of the exercises Aundrea Lagana does with her personal trainer.