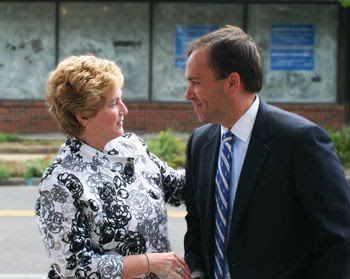 The Greenwich Time Has Refused To Back Peter Tesei, But No One Reads The Out Of Touch Local Rag ......

"I am very pleased that Peter Tesei is seeking a second term as Greenwich's First Selectman. He is someone the people of Greenwich trust, respect and can count on to effectively address some of the toughest challenges facing the town, especially in these difficult times. I have enjoyed working with him over the past two years and I encourage Greenwich voters to support Peter's re-election this November."
– Governor M. Jodi Rell

Others Who Are Enorsing Peter Tesei

"In what has arguably been the most challenging time to govern since the 1930s, Peter Tesei has risen to the task. Simply put, he is the right man, in the right spot, at the right time."
- State Representative Fred Camillo

"As Chairman of the Board of Education, I've worked closely with Peter during the past two years. As an effective, moderate, and decisive leader, Peter has done everything in his power to support our schools, always putting the interests of our students first. He knows that providing a high-quality school system is one of the core community values in Greenwich."
- Nancy Weissler, Chairman Greenwich board of Education

"Peter Tesei has extraordinary leadership skills which he has recently best demonstrated in successfully navigating our town through the worst financial circumstances since the Great Depression. In conjunction with the BET, he has delivered a balanced budget with only a minor increase in property taxes and negligible reductions in service to the residents of Greenwich. He has positioned the town to weather the financial storm and emerge even stronger in the future. It is an honor to serve with someone who has such an impeccable record and terrific personality and who has selflessly devoted 22 years of his life to the town and community that we all cherish."
- State Senator Scott Frantz

"Peter Tesei has a long and effective record showing outstanding leadership in serving the Town of Greenwich. With his experience as a member of the RTM, as Chairman of the Board of Estimate and most recently as First Selectman for the last two years, he has demonstrated his ability to tackle and solve the challenges Greenwich faces. Peter has a rare talent which combines understanding and managing the details of the Town’s budget while also having an intimate knowledge of the people and communities that make Greenwich the unique and wonderful place that it is. The best way to move Greenwich forward is to keep Peter at the helm and reelect him as our First Selectman."
- Former State Senator Bill Nickerson


"Peter Tesei has a proven 20 year plus record of leadership, service and commitment. From his career in banking to his service in the RTM, the Board of Taxation and Estimate, the Budget Committee and now as Greenwich’s First Selectman, Peter Tesei has demonstrated that he is the leader our community continues to require in these economically challenging times. Peter Tesei knows how to make the hard decisions. He listens, deliberates and acts with clarity and determination. Greenwich is fortunate to have a leader who has demonstrated he is able to be an effective First Selectman. Based on his impressive first term as First Selectman Peter Tesei deserves our support and our vote. Join all of his supporters in voting for Peter Tesei on November 2, 2009."
- Lolly Prince, Former First Selectman, Town of Greenwich

"It is a joy to endorse Peter Tesei for re-election. Peter has a proven, quantifiable, track record of success - in business, as a community volunteer, in the RTM, as chair of the BET, and as First Selectman."
- State Representative Livvy Floren

I am writing in support of Peter Tesei. My reasons have nothing to do with politics and everything to do with my personal experience working with him in town government.

From the vantage point of my positions as a member of both the RTM and BET for a total of 27 years, I have observed his competence as he has worked with difficult issues and with people of many different persuasions. He knows very well how this town functions and he has ably led his district, the Board of Estimate, and, now, for two years, the Town of Greenwich as a whole in a constructive direction.

I believe he has the experience and proven leadership to best serve the town for the next terms as First Selectman.
- Val Storms, Former Member of the Greenwich Board of Estimate and Taxation, and Chair of the BET Budget committee

I found him to be a consultative leader who listens as well as he speaks. At the time, he was respectful of the Board of Education's hard work to raise standards, improve facilities (including the rebuilding of Hamilton Avenue School, Glenville School, and the improvement of athletic facilities with artificial turf), and to institutionalize greater accountability. Best of all he was accessible and helpful. Peter Tesei is a Republican who supports the public schools.

More recently, I was impressed by Peter's response as First Selectman to reduce the size of town government when the economy stalled.

However, necessary, laying off one's neighbors is not easy to do. It requires not only courage, but also the ability to set priorities and to act compassionately. Peter recognized that, during a recession, we all have less to spend on everything. Moreover, his actions demonstrated his effective working relationship with the Board of Estimate and Taxation.

So, on Nov 3, I plan to support Peter Tesei for First Selectman and Dave Theis for Selectman. Their priorities are mine: connect with the community, maintain essential local services, demand excellence, and keep town spending under control.
- Sandy Waters, Former Chair of the Greenwich Board of Education

As a lifelong resident (well nearly except for college, graduate school and a short time before I was able to move the miracle mile back to Greenwich), I am indeed privileged to live in a community as vibrant and supportive as Greenwich.

I live in a place where we are so fortunate to have intelligent, responsive and responsible people wanting to be a part of government.

It is simply not possible for everyone to agree on every action that a political figure undertakes or suggests. So, in deciding whom to vote for, it is most important to look at the candidate's integrity, the body of their work, whether they have good intentions and whether the course they want the town to travel corresponds with the voter's own view of what is desirable and a viable course.

I knowPeter Tesei personally and believe that his moral character is unwaveringly strong and set on the right course. I know how hard he has worked for the good of the town and know that he has made difficult decisions in a difficult time. I know that he recognizes that there are many difficult decisions yet to be made and is prepared to make them. I also know Lin Lavery and know that Lin has strong beliefs and believe that she too has the town's well being at heart in the decisions that she has and will make. I hope that Lin will continue to be a leader in the town.

On Election Day, however, no one can vote for two first selectmen. You can only vote for one.

With the considerations I have set forth above, I will be casting my vote on Election Day for Peter Tesei. As a resident of Greenwich, it is my privilege to do so.
- Jeremy E. Kaye, Greenwich, CT

"Peter Tesei has a track record of proven performance. He has accomplished government by consensus."
- Frank Trotta


"Bright, measured, principled, and respectful of all Greenwich residents, Peter is the embodiment of what we all want in a public official."
- Joe Romano

The Heast Corporation Changes It's Tune

"The people of Greenwich have spoken – loudly – and given First Selectman Peter Tesei a ringing endorsement of his first term in office and the privilege of beginning a second"
– The Ass Kissing Greenwich Time, November 4, 2009

Greenwich gets trash-processing rebate
The Connecticut Resources Recovery Authority will be shelling out more than $100,000 to Greenwich in a rebate connected to the region's trash-to-energy processing incinerator operated by

Focus on Academia
Public school officials are inviting community members to offer their feedback on the traits they desire in the next Greenwich High School headmaster during a community forum at 7:30 p.

Greenwich police search for appliance thieves
Newly constructed homes have become the latest target for thieves after police said two suites of high-end appliances were stolen from inside two residences in the center of town.

Busy Greenwich intersection will remain fact of life for motorists
It's a busy intersection that Karen Sherr avoids as much as possible.
"I live in North Mianus and I sneak in the back way to come here," she with a laugh about a bustling crossing on East Putnam Avenue at the Riverside Commons strip mall.

Conspiracy theory abounds over missing campaign signs
The height of the political silly season has arrived in Greenwich, with Republicans accusing Democrats of stealing campaign signs as part of a conspiracy.

Please send your comments, news tips and press releases to GreenwichRoundup@gmail.com
Posted by Greenwich Roundup at 11/01/2009 02:21:00 PM No comments: Links to this post

GREENWICH, November 1, 2009 – Greenwich Community Television Channel 79
will be featuring a day long series of programs featuring thirty-two
Greenwich World War Two veterans. Completed as a student project, this
series is a valuable historical record of those residents of Greenwich
who served in the Armed Forces during World War II. The original program
was produced by students from Paul Burke's and Dwight Wall's classes at
Greenwich High School.

The programs will be aired on Veteran's Day, Wednesday, November 11th.
The broadcasts begin with Part One at 10:00am, and continue all day with
Part Nine airing at 9:00pm. Each part of the series features several
Greenwich veterans discussing their experiences in World War II.

The featured veterans in each part of the series are:

For updated information on the specific program times for each part of
the series, tune into channel 79 or visit Greenwich Community
Television's web page at
http://gctv.greenwich.org/schedule.

Greenwich Community Television is Greenwich's local government
access channel committee. GCTV Channel 79 provides broadcasts of
town meetings as well as other programming of local cummunity
interest. GCTV Channel 79 is available to all Cablevision subscribers
in the Town of Greenwich and on the Internet at http://gctv.greenwich.org.