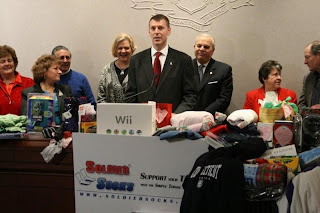 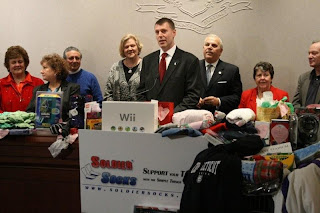 Standing in Hartford alongside members of our state government I was moved while listening to people speak of the sacrifices our men and women serving abroad are making, especially at this time of year. Unfortunately, reality intruded when someone showed me a letter that Congressman Himes recently sent out. It was then that I realized that for once I really did understand the saying; "the silence is deafening."

As members of both parties stood together our Congressman was one of the few people of prominence to ignore the request to stand together for our brave soldiers. When I read his email I was shocked at the callous way he spoke of taking a trip to Afghanistan after he rolled up his sleeves to get back to work on financial regulation. He spoke of the wonders of being with old friends and that his family is growing up so fast. At the same time, Washington is making the decision to send 30,000 more troops to Afghanistan. That's in addition to the hundreds of thousands that are already there that haven't had the privilege of spending the holiday safe at home with family and friends

While the Congressman was relaxing members of both parties were working right here in CT to bring some assistance to those that truly serve. Most importantly, while the Congressman was eating his turkey, those soldiers were risking their lives while waiting for their government to decide if they would get the help they needed to get the job done.

How much rolling up of the sleeves will Congressman Himes be doing on financial regulation while he is in Afghanistan under the protection of those he works so hard to ignore? I can only hope the Congressman decides to break his silence and explain to those risking their lives why it took so long to decide? Or why he chose not to stand with us and support them in Hartford or anywhere else. Perhaps as a member of the homeland security committee he can explain why they are risking their lives to pull terrorists out of caves so that we can ship them to NY for trial as if they were common criminals. Somehow, I doubt he will do any of those things. My money is on a trite tweet and nice photo of the Congressman eating an MRE and comparing it to M&M's from Air Force One.

The really sad part was reading the ending of Congressman Himes' letter. As he spoke of the Holiday Season and the trip to Afghanistan, he had the gall to ask for a donation to his campaign. While most of us see this time of year as a chance to give to others, Congressman Himes feels no shame in asking for 10 dollars for himself. That money can buy a pack of ten pair of socks for those soldiers he is visiting. Jim Himes speaks of walking 6 miles a day at work and using a pedometer to measure them. Try walking in someone else's socks and measuring distance in villages and mountain tops. I challenge the Congressman to take only one pair of socks on his trip, I will even give him his ten dollars if he does.

The callous tone and clearly out of touch message speaks volumes to the need for change in our representation. Congressman Himes may be playing fireman, and hitching a ride on the President's plane while waiting to take a junket to a war zone for a photo op, but he is clearly not doing work for our State. We need a leader that doesn't brag about walking 6 miles at work before drinking a glass of wine. Instead we need one that sticks around and actually gets something done. Connecticut, it is time to declare our resolution for the New Year, we resolve to elect someone that will get things done!