Greenwich to take closer look at managing harbors
Greenwich Post - Greenwich,CT
Town agencies are not the only ones that have a hand at regulating Greenwich’s waterfront. Some of the town’s harbors are federally regulated ...


Keepers of the crown Greenwich wrestling team edges out Brunswick ...
Greenwich Post - Greenwich,CT
and Brunswick wrestling teams. With the outcome still in question until the It was a finish that was perfect for the annual battle between the Greenwich...


Taft skates to shutout victory over Greenwich Academy
Greenwich Time - Greenwich,CT
That is precisely what the Greenwich Academy hockey team has done throughout this season as it has played a bevy of top notch Division-I talent to challenge ...

my aunt dot
By Barbara Benham(Barbara Benham)
Here is her obituary from the Greenwich Time. I could not get up to the service because of work deadlines. We had many wonderful visits over the years, at her house in Old Greenwich, in her yellow living room, and more recently at the ...
TRAVEL SWEEPS - http://travelsweeps.blogspot.com/

Please send comments to GreenwichRoundup@gmail.com
Posted by Greenwich Roundup at 2/07/2008 02:07:00 PM No comments:

Legislators support Rell's plan for DOT
Gov. M. Jodi Rell had barely announced her plans to break up the state's Department of Transportation when a smile broke out on Carlo Leone's face.

Christians advised to reflect on their priorities
The Second Congregational Church marked the start of Lent yesterday with an Ash Wednesday service that gave parishioners the option of getting ashes placed on their forehead in the form of a cross.

Votes display wealth divide
Barack Obama cleaned up in the town's more affluent neighborhoods in racking up a Super Tuesday triumph over Hillary Rodham Clinton in Greenwich, while John McCain carried all 12 of the town's voting districts en route to victory over Mitt Romney.

Norwalk's own survivor chosen as a fan favorite
When the 16th edition of "Survivor" premieres at 8 p.m. today, Norwalk residents may recognize one contestant.
Posted by Greenwich Roundup at 2/07/2008 12:13:00 PM No comments: 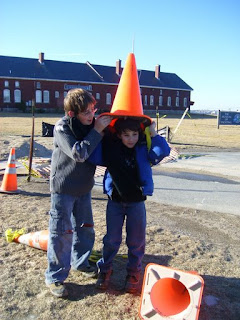 When is the never ending fiasco of the
Hamilton Avenue school contruction project going to come to an end.

Everyone knows that Hamilton Avenue School is not going to be finished in for use in the fall.

Hamilton Avenue children are going to be forced to spend yet another year in the leaky modular classrooms.

School Administrators have allowed this school construction project to go from bad to worse to a totally incompetent failure.

Day after day Hamilton Avenue parents are forced to wait for a school that is way behind schedule and has suffered one design flaw after another.

Greenwich taxpayers are repeatedly forced to pay through the nose for this hopelessly over budget school project.

This school construction management disaster was voted an additional half a million dollars by the BET and the RTM last year.

The school administrators promised that this would fix Hamilton Avenue School once and for all and the school would soon open.

Last month, Greenwich taxpayers forced to shell out another half a million bucks or the failed construction project will come to a "grinding halt."

Hello, the failed Hamilton Avenue School appears to already at a halt.

Has anyone seen any substaintial progress at the construction site?

Once again, Betty Sternberg, the Greenwich Superintendent and her horde of incompetent administrators, will most likely continue lying to the taxpayers of Greenwich and promise that there will be no further delays.

Betty's "Everything Is Under Control" speeches are beginning to sound like finger nails on a chalk board.

Does anyone think that the very high paid Sternberg
have any credibility what-so-ever?

Almost everyone is starting recognize that Sternberg's has a pitiful record of dismal failure and non-accomplishment.

Unfortunately, Hamilton Avenue Scholl will continue to be a hideous boondoggle, that will be followed by another hideous boondoggle at Glenville School.
Posted by Greenwich Roundup at 2/07/2008 12:02:00 PM No comments: