Please send your comments, news tips and press releases to GreenwichRoundup@gmail.com
Posted by Greenwich Roundup at 9/22/2011 10:07:00 PM No comments: Links to this post

Please send your comments, news tips and press releases to GreenwichRoundup@gmail.com
Posted by Greenwich Roundup at 9/22/2011 10:06:00 PM No comments: Links to this post

Whitman Breed Abbott & Morgan LLC has announced that Lawrence Sperry Mannix has joined the firm as a partner in its Greenwich office. Prior to joining Whitman Breed, Mannix had been a partner at Hawthorne, Ackerly & Dorrance, LLC, in New Canaan since 1995. He remains as counsel to his former firm and is retaining his New Canaan office.

Mannix received his bachelor’s degree from Holy Cross College, law degree from the Catholic University of America and master’s degree in taxation from the Boston University School of Law. He is admitted to practice in Connecticut, Massachusetts, Washington, D.C. and the United States Tax Court. He advises clients on all aspects of estate planning, probate, estate and trust administration, and business succession planning. He regularly prepares complex wills, trusts and shareholder agreements, as well other estate planning and business documents.

Raised in Wilton, he resides there with his wife, Deidre, and their three children. His father, John F. Mannix, served New Canaan and Wilton as a state representative and was chairman of the State Board of Education.

Hi! I wanted to take a moment to introduce myself. My name is Lisa Nuland and I am the new Webmaster and Marketing Director for the JCC Greenwich and UJA Federation of Greenwich.

I wanted to send you some upcoming events and ask if you can highlight or include them in any eblasts that are being sent out.

Take care and I look forward to working with you!

October 2 @ 7:00 PM
Boys & Girls Club, 4 Horseneck Lane, Greenwich
Eliot Spitzer and Alan Dershowitz: A Turning Point for the MidEast and the World
LIVE from NY's 92nd Street Y
Explore the essential headlines of the day with two of the nation's most incisive and provocative voices.
$18

October 16 @ 5:00 PM
Carmel Academy, 270 Lake Avenue, Greenwich
JCC Cinema: A Jewish Girl in Shanghai
China's first Jewish-themed film charts the WWII exploits of a young Polish refugee and her Chinese friend. Animation.
Speaker: Evelyn Pike Rubin, resident of Shanghai during WWII. For ages 11 and up.
$12 General tickets; $6, Seniors
October 24 @ 10:00 AM
YWCA Greenwich, 259 East Putnam Ave, Greenwich
Is Sex Passé? A Conversation with Erica Jong
In the 70s, Erica Jong taught women how to fly. Now her daughter's generation wants to lay low -- or not at all. Is sex less desirable when it's not forbidden? Join us for a stimulating discussion on the evolution of sexuality in America. Co-sponsors: YWCA Greenwich & Jewish Book Network.
$10
October 26 @ 7pm (6:30pm cocktails)
Bruce Museum, 1 Museum Drive, Greenwich
Auspicious Liaisons: The Letters of O'Keeffe and Stieglitz
A Conversation with National Gallery of Art curator Sarah Greenough
Discover what artist Georgia O'Keeffe and photographer Alfred Stieglitz wrote one another at the dawn of American modernism, from National Gallery of Art senior curator Sarah Greenough. She will present her edited work, My Faraway One: Selected Letters of Georgia O'Keeffe and Alfred Stieglitz: Volume I, 1915-1933.
$18
October 30 @ 10:00 AM
Carmel Academy, 270 Lake Avenue, Greenwich
JCC Cinema: Shalom Sesame's Mitzvah on the Street
Music and celebration in Israel, from Grover enjoying a Bar Mitzvah in Jerusalem to celebrated artist Matisyahu teaching Oofnik to "beat box" Hava Nagila.
General tickets: $12; Seniors $6; Children under 6, free.
Posted by Greenwich Roundup at 9/22/2011 04:13:00 PM No comments: Links to this post

As many of you know, I left Washington in early August utterly dispirited by the eminently avoidable debt-ceiling circus. As I suspected it would, the historically unprecedented mud wrestling hurt everyone: the Congress, both parties, and most tragically, the economy and the American people.

Fortunately, since I’ve returned to DC, I’ve noted a real change in tone. My colleagues have been trying to explain the inexcusable to enraged constituents. Perhaps the experience has focused their minds. I’m not so naïve to believe that a change in tone leads to a change in action, but I am feeling better about the prospect for meaningful progress.

In the last week, the president has done two essential things: he has proposed a meaningful jobs plan to put Americans back to work, and he has proposed his version of a “grand bargain”, the type of $4 trillion deficit reduction plan we need to stabilize our nation’s debt. Importantly, he has connected those plans to the underlying American values of fairness and shared responsibility that resonate through our history and among our people. And he has told us unequivocally where he stands. Agree or disagree with his proposal, these are the elements of conviction and leadership.

Make no mistake, the road ahead is fraught, and failure is a real possibility. There are elements of the president’s plan I don’t like. The savings from accounts set up for Iraq and Afghanistan are questionable, and I’ve never met a business owner who will offer a job to get a small tax credit. The epic task of streamlining our health care system is addressed with un-epic ideas. And I promise you, there are 534 other opinions in Congress.

And of course, the Tea Party majority in the House is determined to insulate the very most fortunate Americans from any responsibility to join in this national project, and is determined to avoid handing this president anything resembling success. On these things, they are full of passionate intensity.

I hope you will join me in urging the Supercommittee to “go big” and craft a fair, equitable and forward-looking grand bargain that demonstrates courage, compassion and compromise. Our nation risks losing its competitive edge if we don’t have the resources to invest in the education of our people and the infrastructure that allows them to succeed. Only by breaking the gridlock and thinking outside our partisan pigeonholes can we move forward on so many other critical issues. 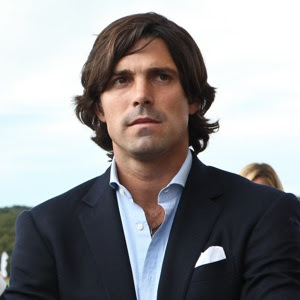 THERE IS A REASON THAT GREENWICH ROUNDUP IS NOT INTERESTED IN GOING TO GREENWICH POLO MATCHES ....

The handsome face of Polo, Nacho Figueras (pictured), was scolded by Valentino for the fashion faux pas of wearing blue socks with brown loafers at the St. Regis 1904 Polo Cup in Greenwich, Conn., Saturday.

A spy said, “He was giving him a friendly hard time about wearing navy blue socks with loafers.

Nacho replied, ‘I just came from warming up and didn’t think to take them off.’

Nacho was like, this guy doesn’t miss a thing.”

Also there were Jason Wu and Jessica Hart.