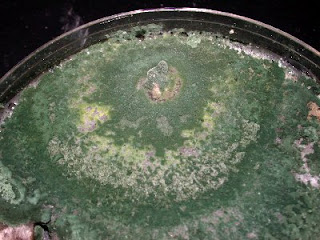 GREENwich Time Starts To Learn That

GREENwich Public Schools Lied About The

GREEN Mold Classroom Contamination
Sue Wallarstein had her maintenance crews scrub and scrub, but they just could not cover up those high mold spore counts.

The school maintenance crews even removed all the contaminated school desks and they still found high mold spore counts.

"I was hired to figure out whether the children had been exposed to high levels of mold," said Robert Leighton, a Forest Hills, N.Y., certified industrial hygienist who conducted the tests.

High levels of mold found in a wall, outside a modular building and on a piece of carpeting show that Hamilton Avenue School students and staff were exposed to the spores, according to test results released yesterday by a parents group....
..."The carpet acts as a memory," he said. "It tells us what things were exposed there in the past. The carpeting is showing us that there was contamination."

Leighton also found high levels of airborne mold outside of the modular in the area next to the building's entrance. While it is natural to find high levels of mold in the outdoors, the readings were particularly high, he said....

Storm slams town
Major roads in Greenwich were snarled during yesterday morning's commute by fallen branches and wires that were knocked down during the previous night's thunderstorms, officials said.

Death penalty possible
Prosecutors charged a suspect in the Andrew Kissel stabbing death with capital felony yesterday, arguing he took money to kill Kissel from his cousin, a co-defendant.

Home built by famed architect gets distinction
In the southwest bedroom of Nan and Peter Levy's home there is a fireplace mantel painted in a Chinoiserie style, with bold gold and green colors.

Himes' rival files forms
Battling near triple digit temperatures and car trouble, a Greenwich woman filed petitions by a 4 p.m. deadline in hope of forcing an August Democratic primary against the party's endorsed candidate in the 4th District congressional race.

Developer awaiting P&Z approval for So. Water St. building
For years, it has served as a place where things got made. From the early 1900s to the early 1960s, the property at 84 So. Water St. was where George Mertz and Sons created custom millwork.

Sorry, for the delay in posting.

Late morning and early afternoon Greenwich Roundup was updating these news stories from yesterday. Basically all of the articles were linked to this news article which was also updated.

Then the rest of the afternoon and evening was spent talking to three individuals who have had a news story totally ignored by the Greenwich Citizen, the Greenwich Post and the Greenwich Time.
Posted by Greenwich Roundup at 6/12/2008 09:59:00 PM No comments: Links to this post