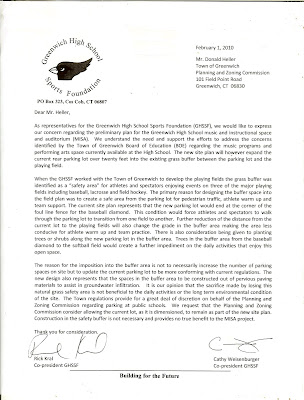 You Wont Read This In The Greenwich Time .....

.....The new site plan will however expand the current rear parking lot over twenty feet into the existing grass buffer between the parking lot and the playing field.

When the GHSSF worked with the Town of Greenwich to developed the playing fields the grass buffer was identified as a "safety area" for athletes and spectators ....

GHS auditorium project doesn't make the cut
By Colin Gustafson, Staff Writer
Faced with a choice between the two biggest-ticket items on town's capital improvement projects list, First Selectman Peter Tesei has recommended that the town fund a central firehouse rehabilitation but not a new high school auditorium and music spaces next year.
To fund both projects, local taxpayers would be on the hook for $50 million in the 2010-11 fiscal year when the town finance board has called for a roughly $50 million cap on capital spending.
Knocking the $27 million auditorium project off its expense sheet will allow the town to pay for both the $23 million firehouse rehab and the 63 other projects on the 2010-11 projects list, though not all of those smaller-ticket items are guaranteed to get funding next year.
Tesei said his choice between the two big-ticket projects came down to whether he was confident they would be "shovel ready" for funds next year. The Greenwich High School Music Instruction Space and Auditorium project, or "MISA," would not be ready, he concluded....... 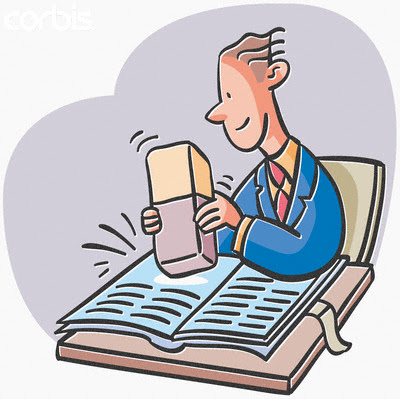 Often Times The Coverup Is Worse Than The Crime
Superintendent says: 'No misconduct' in Byrne retirement
He Said:
“It has come to my attention that the news media has been provided with false and/or misleading information regarding Anthony Byrne’s employment status with the board,” Dr. Freund said in his statement. “Mr. Byrne is currently on leave pending a voluntary retirement when he reaches eligibility effective April 1, 2010. Mr. Byrne has not been terminated and there has been no finding that he engaged in any misconduct in the course of his employment by the board.”
She Said:
According to district Director of Communications Kim Eves, Mr. Byrne was placed on leave with pay Jan. 4.
He Clamed Up:
Asked why he was placed on leave, Dr. Freund said he couldn’t comment because it is a personnel matter.
Mr. Byrne was responsible for helping chose contractors for school construction and maintenance.
The Post received unconfirmed reports last week that Mr. Byrne had been removed from his position due to allegations of receiving payments in connection with the construction of the new Hamilton Avenue School and the modular classrooms at Western Middle School, both of which proved to be controversial projects. Parents complained about shoddy construction and placement of the modulars, which eventually had to be closed and remediated after high levels of mold were discovered, and the school construction was years behind schedule and over budget.

"The allegations also appeared on a number of Greenwich blogs."

01/24/10 Can Parents Trust Stacy Gross And The Board Of Education To Tell Them The Truth About Mold And Asbestos At WMS ?

01/26/10 You Wont Read This In The Greenwich Time; Key Figure In School Mold Fiasco was escorted from his job at the Greenwich BOE

01/29/10 They Just Cover Stuff Up In Greenwich - The Single Family Home Owners Have An Obligation To Pay The Bill, But They Don't Have A Right To Know

One Month After Security Escorted Tony Byrne Out Of BOE Headquarters.....

Greenwich Time Cub Reporter Colin "BOE BROWN NOSE" Gustafson Starts To Ask questions About Tony Byrne, But Hits A Stone Wall With The Powers That Be

Director of Facilities Anthony Byrne has tendered his resignation, effective sometime in March, according to Board of Education Chairman Steve Anderson.

School officials declined to discuss the reasons for Byrne's departure, saying it was a confidential matter."I'm not going to discuss personnel, one way or the other," Superintendent of Schools Sidney Freund said.

Efforts to reach Byrne, whose absence began Jan. 4, on Thursday were unsuccessful."

I was told (Byrne) was going to be retiring," First Selectman Peter Tesei said. He declined to discuss the matter further, saying it does not fall within his authority as first selectman.

District employees were notified of Byrne's absence in an internal memo on Jan. 4, a school official said.

01/29/10 Another Greenwich Blogger Starts To Cover THE BOE Scandal Involving Tony Byrne
EVEN MORE BACKGOUND INFO ON HOW THE BOE HAS LIED TO THE SINGLE FAMILY HOME OWNERS OF GREENWICH BEFORE:

03/24/09: PRESS RELEASE: Mold Found At Hamilton Avenue School. Here Are The Test Results
01/23/10 You Wont Read This At The Greenwich Time: Now There Is Mold At Western Middle School

10/09/08 Frank Mazza Doesn't Know An Ass From A Hole In The Ground. It Wasn't Green Paint It's Green Mold
12/10/08 Hamilton Avenue School Update: The Modulars Are Once Again Leaking And Causing Electrical Problems. Has Mold Returned To The HAS Modulars ?

Statement from Superintendent of Schools, Dr. Sidney A. Freund:

“Paul Burke has resigned his employment as a teacher and coach following his recent incarcerationsubsequent to a second conviction for driving while intoxicated. Given the procedural requirementsfor contract termination, we determined that it was appropriate under the circumstances to accept hisresignation, effective June 30, 2010. By resolving this matter through a voluntary resignation now, wecan move forward immediately to post Mr. Burke's teaching position as well as his lacrosse coachingposition. Mr. Burke has paid a significant price for his actions, losing both his job and his freedom.We hope and trust that Mr. Burke has learned from this difficult situation, and we wish him the best ashe moves on with his life.”

02/05/10 DOWNTOWN TRAFFIC NIGHTMARE: You Wont Read This In The Greenwich Time, Because It Is About The Old Greenwich Time HQ Building On Elm Street 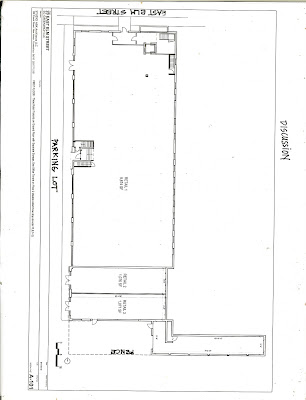 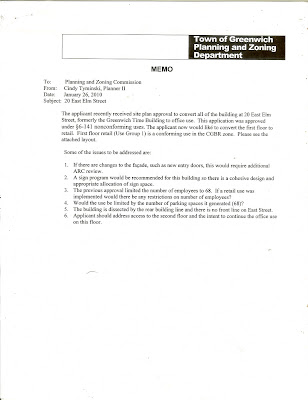 ARE THEY FREAK'N NUTS ?

Talk About Nonconforming Uses !!!!!
Town of Greenwich officials are actually considering putting a 10,000 SQUARE FOOT BIG BOX STORE right smack in the middle of Greenwich Avenue.
They are going to kill whats left of the independent downtown merchants and really cause gridlock on Greenwich Avenue.

GREENWICH TIME REPORTER
ONCE AGAIN GETS
NERVIOUS IN THE SERVICE
Greenwich Time Reporter Frank MacEachern Didn't Want To Touch This Story When He Covered The Planning And Zonning Meeting Two Days Ago. It Was Much Easier To Report On The Water Company

Zoning commission has pointed questions for water plant proposal
Greenwich Time - Frank MacEachern - ‎Feb 4, 2010‎
Planning and Zoning Commission members cast a skeptical eye on a revised proposal by a water company, one year after they had rejected an earlier plan.
Aquarion Water Co. of Connecticut wants to ...

Please send your comments, news tips and press releases to GreenwichRoundup@gmail.com
Posted by Greenwich Roundup at 2/05/2010 02:47:00 AM No comments: