Ned Lamont In The Blogoshere

Please send your comments, news tips and press releases to GreenwichRoundup@gmail.com
Posted by Greenwich Roundup at 2/11/2010 09:28:00 PM No comments: 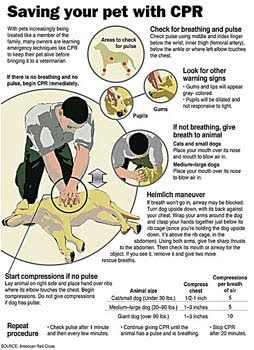 The was a structure fire at 295 Palmer Hill Road in North Mianus. Dog pulled from home, responders performed CPR.

Despite the best efforts of emergency officials, the dog pulled from a North Mianus house fire reportedly could not be saved.
A second animal has also [erished in the fire.

Thank you for picking up our news yesterday and today. (Restaurant franchise coming to Stamford/Greenwich.)

Question: do you want to have news releases emailed to you, or do you pick them up through your monitoring?

I suspect the latter, but wanted to ask. 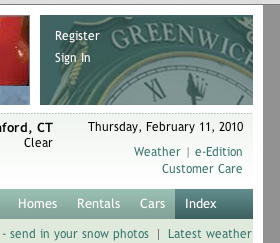 ‘Hey, where’d the clock go on GreenwichTime.com?
February 11, 2010 at 9:56 am by Keith Whamond
It’s been over a month since we relaunched GreenwichTime.com.....
......But as soon as we flipped the switch from the old site to the new one, we heard one particular piece of feedback again and again.
“What did you guys do to the clock?!”
It’s official: When we relaunched the site, we removed the famous Greenwich clock from our site header. The truth is, we had no idea that the Greenwich community had such a strong passion for their beloved clock....
....I’m pleased to say we’ve heard you loud and clear. And, starting a few days ago, the clock is back....
PLEASE SEE:
02/10/10 Greenwich Bloggers Continue To Grow At Double Digit Rates As The Greenwich Time Web Traffic Slows To A Crawl
02/10/10 Greenwich Roundup Once Again Catches Colin "BOE BROWN NOSE" Gustafson In Once Again Inacurately Reporting The News
02/04/10 Greenwich Roundup Sets A New All Time Record And GT Editor David McCumber Wants To Know,"What The Hell, Happened To The Greenwich Time"
JUST ONE MORE LINK:
02/05/10 DOWNTOWN TRAFFIC NIGHTMARE: You Wont Read This In The Greenwich Time, Because It Is About The Old Greenwich Time HQ Building On Elm Street
IT LOOKS LIKE THE RELAUNCH
OF THE GREENWICH TIME IS JUST
A LAST MINUTE DESPARATE ACT
THAT ISN'T GOING TO HELP MUCH

Let's See How Well Greenwich Time Web Editor Jonathan Lucas And Hearst Newspaper's Web Guru Keith Whamond Does In The Next ABC Newspaper Report Due This March.
That's Right Greenwich Time Web Editor Jonathan Lucas And Hearst Newspaper's Web Guru Keith Whamond Have About Twenty Some Freak'n Days To Get Thier Numbers Up
NOTE TO LUCAS AND WHAMOND:
Your Web Traffic Numbers Might Improve A Little If You Fixed All Of The Broken Links On The Greenwich Time Web Site.
You Might Want To Start With Your Home Page:
For Example:
========================
Police Reports (No Good)
Robbery suspect gets a new lawyer
By Debra Friedman, STAFF WRITER
A Bridgeport man charged with robbing the Estate Treasures consignment shop in Riverside received a special public defender Tuesday after a prosecutor said his previous lawyers had a conflict of... More »
Danbury youth minister faces more sexual assault charges
Police blotter
Third suspect ID'd in Estate Treasures robbery
Police blotter
More Police Reports » (Also No Good)
=========================
Lucas And Whamoud Should Also Fix This Link:
Local News
After That Hearst Newspaper Editor David McCumber Should Have Lucas And Whamond Fix All Of The Broken Greenwich Time RSS Feeds:
Greenwich Time: Local Sports - RSS Feed
Sacred Heart squash sweeps past Holy Child - RYE, N.Y. -- Missing three starters certainly didn't tame the Convent of the Sacred Heart Tigers in its squash match against School of the Holy Child on Th...
3 weeks ago

Today's Greenwich Time Editorial
Compassion and hate toward Haiti - The images and information relentlessly arriving from Haiti are simply incomprehensible. How to grasp the sheer magnitude of the trauma suffered by that sm...
3 weeks ago

Greenwich Columnist Jerry Dumas RSS FEED
Dumas: There's a club for every sport -- at least there used to be - Large pink balloons bumped softly against the ceiling in a room at the Burning Tree Country Club. Dangling silver ribbons swayed just above the heads of da...
4 weeks ago

Greenwich Time: Columnists - RSS Feed
Yudain: To tap, or not to tap, FDR on the shoulder? - Prowling the Google jungle for an elusive piece of information, I strayed onto a side road and found myself immersed in heavy-duty statistics about the mig...
4 weeks ago

Ex-Greenwich Time Managing Editor Bernie Yudain
Yudain: To tap, or not to tap, FDR on the shoulder? - Prowling the Google jungle for an elusive piece of information, I strayed onto a side road and found myself immersed in heavy-duty statistics about the mig...
4 weeks ago

Today's Greenwich Time Most Viewed Web Article - RSS Feed
Greenwich police blotter - - Damon Sharkey, 34, of 28 Spicer Road, Westport, was arrested and charged Friday with driving while under the influence. He was released on a $500 bond.
1 month ago

Please send your comments, news tips and press releases to GreenwichRoundup@gmail.com
Posted by Greenwich Roundup at 2/11/2010 02:25:00 PM No comments:

Although this camp does not start until the summer registration begins
March 1.

Any help in getting the word out would be much appreciated. If it could
also be placed in the postings, or calendar section that would be great.

Department Of Parks And Recreation


The Department of Parks and Recreation announces that registration will begin for our summer Skatepark Ramp Camps starting March 1, 2010. The Ramp camp is for skateboarders between the ages of 8 and 14.

During the camp time the skaters will learn new tricks, play games, and skate on this unique park. The program runs weekly Monday – Thursday 9 to 12 noon with a rain date on Friday. The skatepark has an experienced, fully trained staff that is friendly and helpful and can help your child learn how to skate, or improve his/her skills.

For more information, call Frank Gabriele at 622-7821, stop by the Parks and Recreation Department, or visit our website at www.greenwichct.org.

Can you please help us advertise the skatepark opening up for the season on March 6, 2010?

The Department of Parks and Recreation announces that the Greenwich Skatepark will open Saturday, March 6, 2010 weather permitting. The park will be opened on weekends from 12 to 6 pm, and on weekdays from 3:30 pm to 6 pm.

The Greenwich Skatepark is a fun, safe, supervised park for youths 6 years of age and up to Skateboard and inline skate. The Park is located at Roger Sherman Baldwin Park next to the Arch Street Teen Center.

Annual Memberships and Ten (10) day passes are available to residents at the Town Hall, Parks & Recreation Office between 8:00 a.m. and 4:00 p.m. Monday – Friday. An annual membership cost $175.00 and entitles the cardholder to use the park whenever it is open, and receive discounts on classes and competitions. Ten-day passes cost $60.00 and may be used by the cardholder whenever the park is opened.

Day passes may be purchased at the Skatepark and cost $10.00 per day.

All skaters 17 years or younger must have a parent or guardian sign the Waiver release form before they can skate. Full pads are required.

For more information stop by the Department of Parks & Recreation, or visit our Website at www.greenwichct.org.

This Just In To The Greenwich Topix Message Board:

... Darien used its best gymnast, junior Morgan Whitehead, in only two events on Monday in a 134.9-123.35 victory at Greenwich. The Blue Wave raised their record to 9-0. Greenwich dropped to 5-4. "They've definitely improved throughout the season and ...
Comment?

Tesei wants to charge a trash disposal fee to carting companies
One man's trash is First Selectman Peter Tesei 's treasure. To help fill a widening revenue gap, Tesei wants to charge refuse haulers for the amount of trash they dump at the town's transfer station for the first time ever....

... of Selectmen and the Representative Town Meeting to adopt an ordinance allowing the town to levy a tipping fee. Greenwich is the only lower Fairfield County municipality that does not charge carting companies a tipping fee, a system that watchdogs ...
Comment?

Proposed marina and water club expansion faced tough questioning at zoning meeting.
A proposed expansion at a Cos Cob marina and club ran into some choppy waters at the Planning and Zoning Commission Tuesday night, as commissioners said the request ran afoul of waterfront zoning rules....

GHS teacher takes the stage to help homeland of Haiti
Greenwich High School teacher Jean Pointdujour, from Haiti, a composer, will be performing on Thursday, February 11 at the schools' annual Composers' Showcase, a performance of mostly student-composed music.....
Comment?

Please send your comments, news tips and press releases to GreenwichRoundup@gmail.com
Posted by Greenwich Roundup at 2/11/2010 11:52:00 AM No comments: