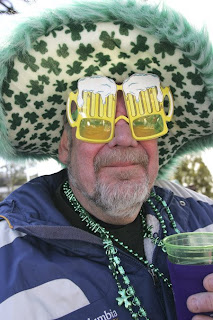 If a nation values anything more than freedom, it will lose its freedom, and the irony of it is that if it is comfort or money that it values more, it will lose that too.
- W. Somerset Mauhan
Posted by Greenwich Roundup at 3/13/2008 05:31:00 PM No comments: Links to this post 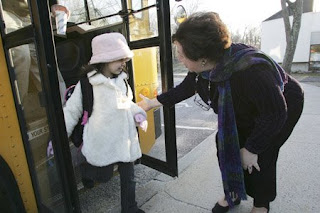 Greenwich Superintendent of Schools Betty "You Can Trust Me" Sternberg greets Hamilton Avenue student Melanie Gonzales as she gets off the bus at Glenville School on Monday morning.
Settling in
Hamilton Avenue kids finish out year in new schools
... Parent Gina DeMartis was one of those reporting problems on Monday. She said there was no teacher on the bus taking her first grader to Parkway, which she said the district promised to supply, and the bus arrived earlier than expected. She called the situation “pretty confusing” and said while she understands kinks will arise, she hopes it will get better.

“This is difficult for my children because this is the first time they’re going to different schools,” Ms. DeMartis said. “The older one always looked out for his brother. But little kids are very resilient. They’re probably dealing with this better than the parents are.”

Ms. Eves said on Wednesday that there had been a para-professional on the bus in question and praised all the district staff for volunteering to help during the transitions.

On Tuesday, Ms, DeMartis told the Post that the teacher was on the bus for the second day, but that it arrived early again and some students missed it. She also said the bus stop, which is in front of the Gateway School at the intersection of Weaver and Chapel streets, was unsafe and that parents should have had more input into where the stops are.

Ms. DeMartis said many parents still worry about what their children were exposed to in the modulars. She rejected the idea that there is no indication of an airborne hazard. One of her children had suffered from headaches and fatigue.

“I don’t know how Betty Sternberg can say that,” Ms. DeMartis said.

Former Hamilton Avenue School PTA president Laura DiBella said parents had come to her about their children having frequent headaches, nausea, nosebleeds, and ear infections during the last weeks in the modulars....

....A March 10 status report from the district said tests had shown “a higher level of non-toxic mold spores” than the initial tests found. The district says in the report that while the results don’t reach a level that is considered hazardous to one’s health, more tests will have to be done before any of the books, supplies or desks left behind may be brought to the other schools....

Freedom is a fragile thing and is never more than one generation away from extinction. It is not ours by inheritance; it must be fought for and defended constantly by each generation, for it comes only once to a people. Those who have known freedom, and then lost it, have never known it again.
- President Ronald Regan
Posted by Greenwich Roundup at 3/13/2008 12:08:00 PM No comments: Links to this post 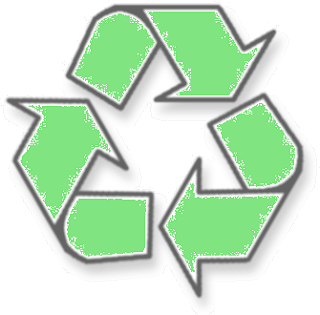 Task force works to make Greenwich a leader in the environmental ...
Greenwich Post - Greenwich,CT
She added the town is the largest employer in Greenwich, with the largest fleet and infrastructure, which makes it that much more important that it be a ...

Commission on Aging considers tax relief changes, but what do ...
Greenwich Post - Greenwich,CT
As property values and the cost of living in Greenwich continue to rise, many seniors are facing problems living in town on their fixed incomes. ...

New rule extends time to object to Greenwich teardowns
Greenwich Post - Greenwich,CT
Such is the state of many old homes in Greenwich, according to Lloyd Hull, alternate member of the Historic District Commission. He said his group reviewed ...

One should respect public opinion in so far as is necessary to avoid starvation and to keep out of prison, but anything that goes beyond this is voluntary submission to an unnecessary tyranny.
- Bertand Russell, The Conquest of Happiness, 1930
Posted by Greenwich Roundup at 3/13/2008 09:09:00 AM No comments: Links to this post

03/13/08 - Just How Much Are The Taxpayers Of Greenwich Paying Superintendent Betty Sternberg And Her Failed Administrators To Lie To The Public? 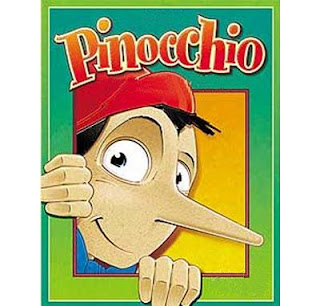 An environmental consultant hired by the school district has said the ceiling of one of the classrooms affected by the roof leaks had mold growth.

LIE OF THE DAY:

Sternberg and other officials said design and construction flaws rather than maintenance shortcomings caused the mold problems at the modulars. They said roof leaks reported months earlier at the modulars were properly addressed and not connected to the mold found inside the walls and in the roof eaves.

Five years ago, when mold problems began surfacing at the old Hamilton Avenue School and other buildings, school district officials implemented a program to help identify and prevent similar problems from occurring in the future.

But now they admit the program was not uniformly put into practice across the district....

Greenwich Roundup says.... But, school officials did identify the mold in the modular classrooms over one year ago. The problem is that they hid the mold from Glenville and Hamilton Avenue School parents.

.... "Everyone was trained," Superintendent of Schools Betty Sternberg said of the program called Tools for Schools. "It was variably implemented from school to school."....

... Tools for Schools is a U.S. Environmental Protection Agency program designed to raise awareness about air quality issues, including assembling committees of teachers, administrators, parents and custodians who work together to identify early indicators of mold and other problems.

School officials came under fire on Tuesday night from the Board of Estimate and Taxation Budget Committee, which questioned why mold problems discovered at the Hamilton Avenue School modular buildings were identified only a couple of weeks ago. They should have been more aggressive in scrutinizing possible mold situations, committee members said, because it was mold that forced the rebuilding of the old Hamilton Avenue School and the purchase of the $3 million modular buildings several years ago.....

Greenwich Roundup says.... The Board of Estimate and Taxation has a long history of suffering incompetent school district fools who are destroying the public schools and increasing the taxes on the single family home owner.

.... "I was frankly surprised," BET member Robert Stone said yesterday. "This is a lesson that clearly should have been learned four years ago."....

Greenwich Roundup says.... Why is Robert Stone "frankly surprised". Was he awake at the BET meetings when school district officials have repeatedly came asking for more and more tax money to pay for all the screw ups at Hamilton Avenue School.

.... Stone is calling on the district to implement a program to visually inspect classrooms and school space on a regular basis to ensure potential problems are caught early....

... BET members said that because taxpayers are going to have to shoulder the cost associated with this latest Hamilton Avenue School mold problem, the district must have a better prevention plan...

Greenwich Roupup says... If Betty Sternberg and her failed school administrators don't come clean the school district is going to need one hell of a litigation plan.

Eventually, this Board Of Education cover up is going to be exposed, when failed school administrators, architects, contractors, engineers and testing companies start getting sued by parents whose children were allowed to sit in a contaminated modular classroom for over one year.
A lot of school administrators and others knew about the contamination for more than a year.

Now these architects, contractors, engineers and testing companies had better make sure that Hamilton Avenue parents are getting full disclosure or they may find their butts in court face claims of substantial liability.

... "This is going to be something that we're going to have to prevent going forward," said Michael Mason, head of the BET budget committee....

JOKE OF THE DAY:

"People walked away with a general sense that progress is being made," said Mike Bodson, the Board of Education liaison for the school's building committee, as he spoke about a Hamilton Avenue School Building Tour led by the ever so efficient contractor, Worth Construction.

Freedom is never more than one generation away from extinction. We didn't pass it to our children in the bloodstream. It must be fought for, protected, and handed on for them to do the same, or one day we will spend our sunset years telling our children and our children's children what it was once like in the United States where men were free.
- President Ronald Regan
Posted by Greenwich Roundup at 3/13/2008 08:44:00 AM No comments: Links to this post

Former POW says 'will to live' helped him survive experience

Surviving in a Japanese prison camp, overtaken by disease and malnutrition, Stanley Wort thought the only thing keeping him alive was his will to live.

Teachers may still get day care

With a trial slated for next month, the town has asked a federal court to throw out a Stamford bicyclist's lawsuit, arguing he hasn't shown that Greenwich's beach-access fees for out-of-towners deprived him of his free-speech rights.

A former ambassador to Afghanistan told World Affairs Forum members yesterday that stability could be achieved in Afghanistan and Iraq, but that would mean long-term commitment from the United States.

Blumenthal wonders if he knew Spitzer

While New York Gov. and ex-state Attorney General Eliot Spitzer was announcing his resignation yesterday, Connecticut's top litigator was on Capitol Hill taking on one of his former colleague's favorite targets -- Wall Street.

A Stamford-led bill that would make "blocking the box" a statewide infraction took a major step toward becoming law yesterday when the state legislature's Judiciary Committee passed it unanimously.

Legislators renewed debate yesterday over a so-called three strikes law after emotional testimony from the sister of the Cheshire doctor whose wife and three daughters were killed during a home invasion in July.

A man walked into the TD Banknorth branch on Post Road East yesterday afternoon, handed a teller a plastic bag and demanded cash before strolling away behind a neighboring office building, police said.

Stephen Catanzaro, a 2006 Greenwich High School graduate, died yesterday when he lost control of his car on an Alabama highway and crashed into a dump truck, police and family said.

Its not all gloom and doom. The winners are hedge funds.

"It is by the goodness of God that we have those three unspeakably precious things: freedom of speech, freedom of conscience, and the prudence never to practice either of them."
- Mark Twain
Posted by Greenwich Roundup at 3/13/2008 05:11:00 AM No comments: Links to this post

03/13/08 - Greenwich Post: Alma Rutgers and Don Snyder expressed "humility and gratitude," as they accepted their awards. 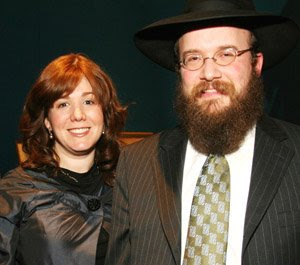 Chabad of Greenwich and Camp Gan Israel hosted their annual dinner Feb. 7 at State University of New York's Performing Arts Center in Purchase, N.Y. With more than 300 attendees, the event was a joyous occasion for all.

The honorees for the evening were guests of honor Alma Rutgers and Don Snyder and Pam and Andy Karetsky; woman of valor, and teen of the year Alexandra Milstein. Honorary chair was First Selectman Peter Tesei. Event chairs were Lisa and Jonathan Daniel and Michele and John Stuart.

For in the end, freedom is a personal and lonely battle;
and one faces down fears of today so that those of tomorrow
might be engaged.
- Alice Walker