Imagine, if you will, living in a neighborhood where all of your neighbors hate you. They routinely walk through your yard and many throw rocks through your windows. You have one loyal friend in your life but he lives a couple of towns over and, though he used to visit and give you a chance to sit on your porch and enjoy the fresh air -- because there is strength in numbers -- he rarely visits anymore.

You try to live your life. You go to the coffee shop but people still scorn you. You hire a police officer to make sure that the people walking through your yard are not carrying rocks. You don't stop them.

You just want to make sure that they don't throw rocks through your windows. Occasionally you have to take action against a neighbor who bursts into your living room and smashes your TV. It's not that they want to steal it -- they just don't want you to have it.

Then, yesterday, the insult of all insults: That good friend of yours from a couple of towns over comes to your neighborhood ... but he doesn't come to see you. He stops next door and drops off a cheesecake to the guy who lives there -- the guy who throws the most rocks at your windows. It's not any cheesecake, though, it's a huge Godiva chocolate cheesecake in a beautiful gold box with a hand-tied ribbon.

How's that make you feel?

Israel has been on the front lines of a holy war, waged by her neighbors against the world since the nation's founding in 1948.

Israel has endured more relentless attacks than any other nation on earth. Her Muslim neighbors vow to never recognize her right to exist, let alone the right of her citizens to move safely through their lands.

Recently there was controversy over the Mavi Marmara incident. In short, Israel has made a decision that requires Gaza-bound ships put into a nearby Israeli port, submit to inspection, and have the cargo delivered by land, at Israel's expense, to its destination. It's not a terribly onerous blockade. It doesn't prevent any legal cargo from entering Gaza -- just the rocket launchers and bomb components that are used to kill Israel's citizens.

In February, Jim Himes signed on to a letter with 52 of his colleagues in the House of Representatives. In response to that letter, President Obama signed an Executive Order earmarking $20 million U.S. taxpayer dollars to "aid in the resettlement of Gaza refugees."

Recently he announced that an additional $400 million will go to the Palestinian Governing Authority to aid in a "humanitarian crisis" ostensibly created by the blockade. The president recently remarked to CNN's Larry King that "Israel's got a legitimate concern there. On the other hand, you've got a blockade up that's preventing people in Palestinian Gaza from having job opportunities and being able to create businesses and engage in trade and have opportunities for the future."

The president is wrong. The blockade does nothing of the sort.

In a year of record budget deficits, unemployment and foreclosure, we are abandoning Israel in order to support a "humanitarian crisis" halfway around the world. That "crisis" is "caused" by an isolated nation imposing a blockade so mild that it has them paying to deliver cargo across land to followers of Hamas who would not allow the Israelis the chance to breathe the same air? Our Congress is out of control and way off the mark.

Imagine again that the neighborhood is the Middle East and that you are Israel. The neighbors are the surrounding Muslim countries, governed by Sharia law. The rocks are bombs and that loyal friend is the United States. Your former best friend has given Hamas $420 million dollars at the urging of Jim Himes and 52 other congressmen and they are mad at you for attempting to protect yourself from being blown up. You can either fight for your life or roll over and die.

How does that make you feel?

Mr. Torres, of Bridgeport, is a Republican candidate for Congress seeking to take Greenwich resident Jim Himes' seat in the Fourth Congressional District.
Posted by Greenwich Roundup at 6/16/2010 09:36:00 PM No comments: 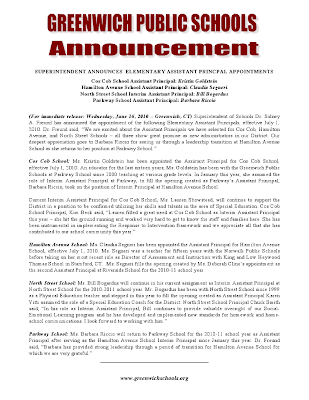 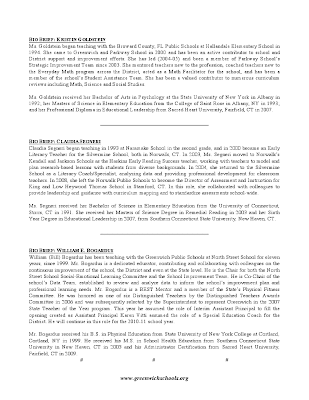 Superintendent of Schools Dr. Sidney A. Freund has announced the
appointment of the following Elementary Assistant Principals, effective
July 1, 2010.

Please send your comments, news tips and press releases to GreenwichRoundup@gmail.com
Posted by Greenwich Roundup at 6/16/2010 03:20:00 PM No comments:

After Tom's success at the Republican convention we are pushing forward by phone banking every week until the primary. The phone banks are a great opportunity for volunteers to get involved, and they will play a large role in helping Tom win in August and November.

We hope you will consider joining us for one or more of the phone banking sessions in either West Hartford, Stamford, or Norwich. Information on dates, times, and who to contact to participate is below. I look forward to seeing you on the campaign trail.

Sundays from 12pm to 5pm

The Stamford office is located at 20 Summer Street in Stamford, CT.

For more information about the Stamford phone banks please contact:

Tuesdays and Thursdays from 5pm to 8:30pm

For more information about the Norwich phone banks please contact:

Please send your comments, news tips and press releases to GreenwichRoundup@gmail.com
Posted by Greenwich Roundup at 6/16/2010 07:55:00 AM No comments:

Greenwich News - June 16, 2010
Two accused of plotting burglary (News Times)
Two Greenwich residents were arrested Friday night after police said they attempted to break into a home under construction on Old Orchard Road.
Former Stamford Mayor Dannel Malloy Unveils 12-Point Jobs Plan; Calls ... (The Hartford Courant)
Democratic gubernatorial candidate Dannel Malloy unveiled his jobs plans Tuesday, saying job creation will be his "single highest priority'' if elected governor.
06/15/10 The Latest News About Congressman Jim Himes Opponent Dan Debicella (greenwichroundup.blogspot)
THE LATEST NEWS ABOUT DAN DEBICELLA WHO IS RUNNING AGAINST GREENWICH RESIDENT JIM HIMES More problems found with Herrmann's primary petitions Ct Post Dan Debicella of Shelton. Norwalk Republican Registrar Karen Lyons said a second voter -- Susan Effren -- has sent her an affidavit stating she did not sign ... DAN DEBICELLA IN THE BLOGOSPHERE New Canaan Roundup: 06/15/10 Dan Debicella: Greenwich Resident And ...
'Much Ado About Shakespeare' at Audubon Greenwich (NewsTimesLive)
The members of Musica Plenti will be performing at the Audubon Center in Greenwich Saturday in a program that celebrate's Shakespeare's work.
Greenwich Historical Society quilt exhibit extended (NewsTimesLive)
'A Stitch in Time: Quilts from the Collections,' an exhibit of quilts on display at the Greenwich Historical Society through Aug.
More Greenwich News From Topix
Dan Debicella: Greenwich Resident Jim Himes Soft On Supporting Israel (greenwichroundup.blogspot)
An Open Letter From Dan Debicella
Dear friends,
Recent reporting in the Jewish Ledger on June 9th indicates just how unwilling Jim Himes is to take a strong position in support of Israel. The full story can be found at www.jewishledger.com. It is clear that we need a Congressman who is unequivocal in his support for Israel. Jim Himes says he supports Israel, but then is unwilling to take a strong stand to support our ally when they are most in need. The United States needs to support Israel as they work to secure their borders and stop weapons from reaching terrorist groups like Hamas. Fairfield County deserves a Congressman who will speak strongly and clearly for our allies in Israel. These are the contrasting statements reported in the Jewish Ledger:
REP. JIM HIMES (D) "Israel is our good friend and our only long term ally in a dangerous part of the world. As Americans we do not rush to judgment before we have the facts. As tragic as the situation in the Mediterranean is, I urge all parties involved to do all they can to reduce tension and to allow the facts to be examined."
DAN DEBICELLA (R) "The United States needs to back Israel as it tries to secure its borders against terrorist groups like Hamas. They have a right to stop ships to ensure no weapons are being moved into the Gaza Strip. Israel is trying to reach out to moderate Palestinians to reach a lasting peace, yet the extremists in Hamas continue to try and pick a fight with Israel. I firmly believe the U.S. should stand with our allies in Israel and promote the removal of terrorist organizations like Hamas from power."
I will continue to advocate for the Israeli people and for their right to defend themselves from extremism. You can help me today by making a contribution of $25, $50, or $100 or by volunteering with the campaign. Together we can defeat Jim Himes and restore common sense to Washington.
All my best,
-Dan
PLEASE ALSO SEE: http://greenwichroundup.blogspot.com/2010/06/061510-dan-debicella-greenwich-resident.html
Plan would restrict smoking to designated areas at Fairfield beaches (Fairfield Citizen-News)
Smokers have been kicked out of bars, restaurants and workplaces. Now, a Fairfield resident would like to see smokers be restricted to designated areas at the town's beaches.
Stew and Rodewald-Scored Othello Begins Performances in Connecticut June 15 (Playbill)
The Shakespeare on the Sound production of Othello , starring Victor Williams and Jesse Perez, and featuring a score by Stew and Heidi Rodewald, begins performances June 15 in Greenwich, CT.

Please send your comments, news tips and press releases to GreenwichRoundup@gmail.com
Posted by Greenwich Roundup at 6/16/2010 06:20:00 AM No comments: