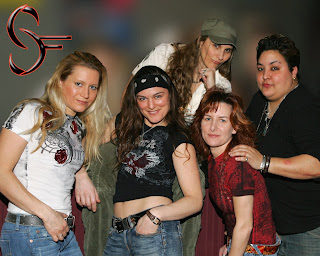 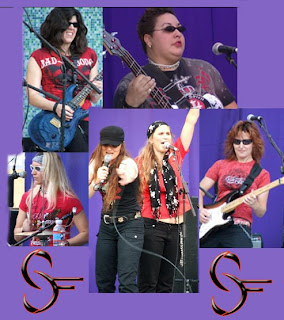 Some have said they need to get press releases a little earlier to meet
deadlines. Here is the Aug. 19 concert with pictures.

SISTER FUNK TO PERFORM
IN THE DEPT. OF PARKS AND RECREATION
2009 CONCERT SERIES

The Department of Parks and Recreation announces that Sister Funk will be performing in the Park and Recreation Wednesday Night Concert Series at Roger Sherman Baldwin Park on August 19, 2009.

For the past 8 years, Sister Funk, the nation’s hottest female group has been heading music festivals, concert arenas and clubs performing songs off their 3 independent original CD’s. Sister Funk has a sound and style best described as commercial Pop/Rock and is most compared to artist like: Pink, and Maroon 5. In May 2009, Sister Funk out rocked New England’s best original bands stealing 1st place for the 2009 Red Door Battle of the Band competition!

CURVE Magazine describes Sister Funk as “provocative, high energy, and entertaining. These women put on a hot show”. According to Conch Key West Chronicle Sept 2006 “Sister Funk, this incredible all girl rock group, absolutely stunned hundreds of concert goers on Duval St. proving themselves not only the hottest all girl group to hit the southernmost City but impressed even seasoned rockaholics.

Now is your chance to see this great group in your own back yard. Bring a picnic dinner, blanket, and the family and listen to some hot Rock music at Roger Sherman Baldwin Park.

Roger Sherman Baldwin Park is located on Arch Street by the Teen Center, and Island Beach Ferry Dock. The rain date for the concert is Thursday August 20th.
.
The final Wednesday night performance of the summer will be The Bob Button Orchestra on August 26, 2009.

For more information please call the Recreation Office at 622-6478, or visit our website at www.greenwichct.org.

Here are the concerts and events for next week.


The Department of Parks and Recreation announces that IN HARMONY will be performing on Wednesday, August 12 from 7:30 pm to 9:00 pm at Roger Sherman Baldwin Park.

IN HARMONY is one of New England’s premier oldies groups. This sweet sounding vocal ensemble is comprised of three guys, and three women and a multi talented synthesizer/keyboardist.

The group consisting of Dee Heavrin, Robin Miller, Scott Poarch, Lenny Seiter, Adrienne Lisko, and Peter Randazzo have always found great joy in singing such classics as “At the Hop” “Be My Baby”, “I Wonder Why”, and “Duke of Earl”.

While performing together for many years the group has worked with such legendary Doo-Wop acts as Johnny Maestro & The Brookly Bridge. The Drifters, The Platters, and The Dimensions. They were also called to perform at The White House for President Bill Clinton, and at the home of Terry Stewart, CEO of the Rock & Roll Hall of Fame in 1998. They have also performed an acappella arrangement of The Star Spangle Banner to a sold out crowd at Shea Stadium in 1999.

The Group has recorded two songs “Lonely Way, and “Come Back to Me” which can be heard on the Starlight Serenade 2000 Doo-Wop compilation CD.

Now is your chance to listen to this wonderful group in your own backyard in Greenwich, Ct.

Bring a picnic dinner, relax and listen to some wonderful music under the stars.

The rain date for the concert is Thursday August 13. For rain cancellation information call 618-7650


DEPT. OF PARKS AND RECREATION
JAZZ ON THE SOUND FINAL CONCERT
OF THE SUMMER


The Department of Parks and Recreation announces that the Jazz on the Sound Concert Series will hold its final concert of the summer on Sunday, August 9th. The concert will feature a Dixieland Jazz band which will play on the 4:00 pm Island Beach ferry, continue on the island and play again on the return trip 5:30 pm ferry.

This is your last chance of the summer to enjoy this wonderful event.

The rain date will be the following Sunday August 16.
For more information please call the Recreation Office at 622-7830

The Department of Parks and Recreation announces that Family Movie Night will be outdoors at the Bendheim Western Greenwich Civic Center on Monday August 10. The rain date is Tuesday August 11.

The entertainment will begin at 7:00 pm with a children’s concert featuring Graham Clarke. After the concert at approximately 8:00 pm we will show the movie Kung Fu Panda on a large 9’ x 12’ screen. Come early, bring a picnic dinner (no barbecues please), a blanket, Frisbee, wiffleball and bat, and enjoy a movie under the stars.

For more information please call The Bendheim Western Greenwich Civic Center at 532-1259, or visit our website at www.greenwichct.org .

As previously indicated in my last email, attached is the department's
press release

On Sunday, August 2, 2009 at approximately 11:30 A.M., members of the
Uniformed Services Division responded to the parking lot of the
Riverside Commons, a small shopping mall, located at 1233 East Putnam
Avenue on a report of a large group of individuals involved in a
physical altercation where baseball bats were possibly being used as
weapons.

On arrival of police personnel it was determined that a large group
of Hispanic males had dispersed from the area in several different
vehicles.

Further inquires revealed that the individuals left in four vehicles
and a subsequent description of the vehicles was disseminated to
local police units.

The four vehicles were subsequently observed and detained by
uniformed officers throughout the eastern section of town.

During the detention of the individuals information was developed
that this matter might be connected to illegal activity involving a
blue van located in the Riverside Commons.

A blue van was located in the aforementioned parking lot and the
driver was subsequently located within the parking lot by uniformed
police personnel.

ICE in Connecticut has arrested four people for immigration
violations.

They are currently detained by ICE pending further investigation.

This case is currently under investigation and discussing any
further details about this case will be inappropriate.

Good morning to everyone,

First, I need to clarify some information, the press release some of you
received yesterday was not prepared by me, so I can not comfirm or denie
any of the information contained in the release that was prepare by other
officer of this department and desimminated under my name.

There is also information being reported that an arrest was made, This
information is also incorrect. The Greenwich Police Department did not
arrest anyone connected with this reported melee incident yesterday.

Any inquires about the Department of Homeland Security- ICE relative to
this incident should be directed to the DHS- ICE office in New Jersey at
973-776-3251.

The department is not holding any on-camera interviews relative to the
matter and the press release will serve as our response to this incident.

08/04/09 PRESS RELEASE: Making Sense of Math and Reading Response to Intervention (RTI) with GRADE and GMADE from Pearson

Group Reading Assessment and Diagnostic Evaluation (GRADE) - Pre K-Adult is a scientifically-researched, comprehensive reading assessment that determines developmentally what skills students have mastered and where they need instruction or intervention.

HOW CAN GRADE and GMADE BE USED FOR RTI?

(2) Progress monitoring: with parallel forms, students can be tested up to four times a year, growth can be measured from fall to spring or from year to year or grade to grade

(3) Placement and planning: results can be used to place students in appropriate instructional groups, enrichment programs, or develop IEP's

(4) Special and regular education: with on level and out of level norms teachers can monitor progress by testing children below, above, or at grade level

To register to attend any of the free 1-hour long Webinar presentations please click the links below.