09/05/11 Associated Press: Mark Teixeira Is Complaining About The Cost Of Sending 3 Kids To Private School In Greenwich. Alex Rodriguez Backs him up 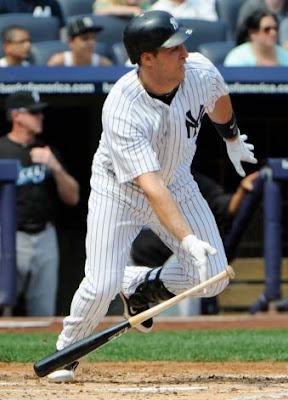 NEW YORK (AP) — Instead of guarding the lines, Mark Teixeira and Alex Rodriguez got to say them.

The New York Yankees stars took a little time off from the pennant race to make guest appearances as themselves on the next-to-last episode of the HBO Comedy "Entourage," which aired for the first time Sunday night. This is one time players didn't mind being accused of acting.

"I'm not going to quit my day job," Teixeira said with a laugh before Monday's game against the Baltimore Orioles.

In the episode, Turtle (Jerry Ferrara) calls Teixeira during batting practice at Yankee Stadium and asks him to double his investment to $500,000 for a planned Los Angeles-area branch of Don Peppe, an Italian restaurant in New York. Teixeira turns him down, complaining about the cost of sending three kids to private school in Greenwich, Conn. A-Rod places a separate call during which he tells Turtle to stop pestering Teixeira.
Not all Yankees caught the cameos. When team community relations consultant Ray Negron shouted congratulations to Teixeira across the clubhouse, pitcher A.J. Burnett chimed in "Good job!" before turning to Negron and asking, "What he do?"

Teixeira said he's friendly with Doug Allin, the series' executive producer, and the genesis for the appearance was a dinner around Christmas last year in Queens.

"Doug and I were eating at Don Peppe's, and we had a bunch of guys together. 'You know what?'" Teixeira remembered saying. "'We should have Turtle open up a Don Peppe's and invest in it.'"

Teixeira wrote his own lines together with Allin.

"We did it a few different ways, just to kind of see what worked the best with the episode," the two-time All-Star first baseman said.

Teixeira's parents and wife watched, but the show was inappropriate for his young children. He's looking forward to having future at-bats in front of the camera.

"If someone wants to throw me in some cameos and let me have some fun in the future, I'll definitely do it," he said.