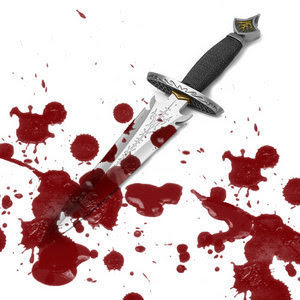 Cops: Driver in Port Chester died of suicide, not crash
The Journal News

Christian Richard Corna, 45, of Steamboat Springs, Colo., had stab wounds transecting the carotid artery and trachea, the medical examiner said. The wounds were inconsistent with the accident, police said, and a bloodied knife was found in the car.

Corna was visiting his fiancée in Greenwich, Conn., according to police and friends of his in Colorado.

He crashed a rented Toyota into the north corner abutment of the Metro-North bridge while heading southbound on the 300 block of North Main Street at 4:30 a.m., police said.

According to the medical examiner, police said, the crash alone would have been enough to kill Corna but wouldn't explain the knife wounds and knife in the car.

A toxicology report is pending. The case could be reopened if something suspicious is found, police Lt. James Ladeairous said.

05/20/09 A Real Greenwich Blogger And Citizen Journalist In Action: Is There Another Greenwich Murder?

Forty-four year old John Coen, from Greenwich, Connecticut, was arrested for assaulting two police officers who were attempting to escort him out of The Ginger Man restaurant.
Police were called to the local eatery last Friday night after Coen started insulting patrons, and harassing the bartender with racial slurs.
After officers told Coen he needed to leave the establishment, he became verbally abusive and lunged toward an officer "in a fighting manner," the police report says.
The officers attempted to arrest Coen, and the drunken man went berserk and tried to grab one of the officer's batons from his belt, causing two officers to pin him to the ground.
The police report says it took several jolts from a Taser to bring Coen under control.
Coen is charged with assaulting a police officer and breach of peace.
UPDATE: 5/20/09

A Greenwich Diva reader emailed Greenwich Diva about the John Coen arrest at the Ginger Man restaurant and she wrote about on April 14.
They wanted to know if the John Coen she wrote about in her post was the same John Coen who is about to be questioned in the death of a Steamboat, Colorado, man.
After doing some research this is what she came up with.
There is a John Coen whose wife, Lisette Coen, was about to marry Chris Corna from Steamboat, Colorado, and Chris was in Greenwich this week to meet Lisette's family.
While he was in Greenwich, he was killed in an automobile accident on the Greenwich, Portchester state line, and although authorities are publicly calling it an accident, IT IS ALLEGED that authorities are going to change it to murder and it is also ALLEGED that John is going to be called in for questioning.
It is also ALLEGED that John was also arrested for sexual harassment in Oct. of last year.
It is possible that there could be two different John Coen's with the same connections out there.
Greenwich Diva will keep us posted as the Greenwich Time and the rest of the "Lamestream" Media wanders around clueless.
Update: 5:43p.m

Chris had stabbed wounds to his throat when he was found Monday morning around 4:30.
05/20/09 Media Alert: Greenwich Diva Is About To File Breaking Greenwich News >>>> Greenwich related accidental death ???

There Is A Whole Lot A Suicides Going On...
http://steamboatpilot.com/news/2009/may/20/corna_death_ruled_suicide/#commentsCan
Can you see the connection between this false suicide and a John Coen, 44 (who Greenwich Roundup has posted about) who resides in Conn. Someone needs to shed some light on this...
PLEASE SEE:
05/20/09 The Raw Greenwich News Feed:High Noon EditionInconsistent injuries in fatal car accident prompts police ...
Lower Hudson Journal news
PORT CHESTER - Police are investigating the death of a Colorado man in a single-car accident early Monday
He had wounds inconsistent with the accident, police said.Christian Richard Corna, 45, of Steamboat Springs, Colo., had stab wounds to his neck, the medical examiner said.
Corna, who was visiting friends in Greenwich, Conn., crashed a rented Toyota into the north corner abutment of the Metro North bridge driving southbound on the 300 block of North Main Street at 4:30 a.m., police said. He had to cross the road to strike the bridge, police said. A county accident reconstruction team is working on the incident.
According to the medical examiner, police said, the crash would have been enough to kill Corna.
Detectives "can't rule out" that anyone else was involved in this fatal accident until a determination is made by the medical examiner and police that the wounds were self-inflicted and/or not a precipitating factor in the accident, Lt. James Ladaireous said....
ALSO:
Popular Colorado restaurateur commits suicide in Port Chester
The Journal News
... accident, police said, and a bloodied knife was found in the car, police said. Corna was visiting his fiancee in Greenwich, Conn., according to police and friends of his in Colorado. He crashed a rented Toyota into the north corner abutment of the ...
=======================================
Please send your comments to GreenwichRoundup@gmail.com
Posted by Greenwich Roundup at 5/21/2009 04:19:00 PM