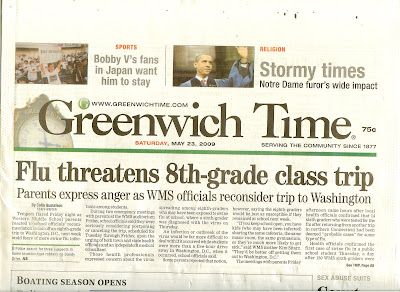 Tempers Are Flaring Saturday Morning As Western Middle School Parents Woke Up And Went Online To Discover If Their Children Were Still Going To Be Allowed To Go On A School Trip To Washington DC.

Greenwich Time Print Readers Wanted To Email A Copy Of The Hearst Newspaper Story To Other Western Middle School Parents, But Were Unable To Do So.

One angry Western Middle school parent told Greenwich roundup that she just can't trust the Greenwich Time, because the Hearst Corporation is so inconsistent online.

A search of the Greenwich Time web site for "Flu" had seven matches and yielded these results ......

Beardsley Zoo has its own Octomom...and Septomom05/10/2009 - BRIDGEPORT -- Olivia and Jodie just gave birth to eight and seven babies, respectively. Their children are healthy, adorable and everyone loves them. But despite their impressive accomplishments, similar results By Amanda Cuda Staff writer

Timeline of an outbreak: swine flu cases and the global response04/28/2009

A search Of the Greenwich Time Website for "Western Middle School" had two matches and yielded these results.....

A search of the Greenwich Time website for "washington" had twenty seven matches, but nothing was about the Western Middle School trip to Washington DC possibly being canceled by the Greenwich Board Of Education.

As usual the Greenwich Time is treating it's online readers like red headed step children.

Greenwich residents thought that Hearst Editor David McCumber was going to put an end to the practice of treating Greenwich Time readers like second class citizens.

Western Middle School parents reacted to school officials' recommendation to call off an eighth-grade trip to Washington, D.C., next week amid fears of more swine flu infections among students.

During two emergency meetings with parents at the WMS auditorium Friday, school officials said they were seriously considering postponing or canceling the trip upon the urging of both town and state health officials and an independent medical consultant.

Those health professionals had expressed concern about the virus spreading among eighth-graders who may have been exposed to swine flu at school, where a sixth-grader was diagnosed with the virus on Thursday.

An infection or outbreak of the virus would be far more difficult to deal with if it occurred while students were more than a five-hour drive away in Washington, D.C., when it occurred, school officials said.