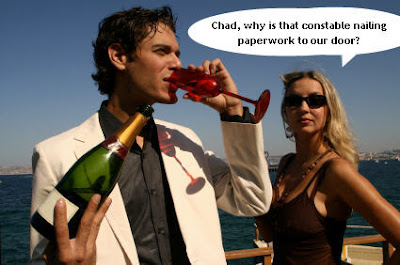 The Greenwich Hosing Market That Bulletproof Bellwether Of Residential Real Estate Is Finally Taking It's Lumps.

Reports Keep Showing That Sales Are Down Listings Are Up And Sellers Are Getting Frustrated.
After years of being insulated from the rest of the country's housing woes Greenwich properties are felling the pinch as skittish buyers are making owners wait longer to sell.
Even the luxury market - where properties generally sell faster - is taking a beating.
Upper tier homes sold for much less during the previous year if they sold at all. High end Greenwich homes are also staying on the market longer.
High end William Ravis real estate saleswoman, Kate Gamble, has told Greenwich Roundup that she has had 3 one million dollar plus deals collapse recently, because of the housing slump in Greenwich.
Greenwich Realtors did not think that Greenwich would get hit.
Another real estate saleswoman told Greenwich Roundup yesterday at the Harvest Time Church coffee bar that she was now looking for another job, and might do real estate sales only on weekends.
A Greenwich homeowner at the coffee bar added that did not need any real estate sales persons reports to know how bad things are.
She and her husband have been trying since June to sell her Greenwich home. The lady said she had to drop the original asking price from 1.38 million to $1.15 million. She said there has been plenty of interest, but still no takers.
She had seven to 10 "extremely interested" people, but no offers ever came.
Greenwich houses was not affected by the subprime mortgage crisis like other Connecticut And New York towns, but because of the loss of jobs, contraction of bonuses, and the fears of job security the Greenwich market has taken a hit.
Some are the hit is a body blow that Greenwich will not soon recover from.
One bold Real Estate salesperson has repeatedly said that the Greenwich Real Estate market started to decline long before September. William Revis salesperson Chris Fountain used to be a real estate columnist for the Greenwich Post.
Early last year he kept warning his readers that the Greenwich Real estate market was headed for a down turn, until a group of real estate agencies led by the Greenwich office of Coldwell Banker demanded Mr. Fountain's head because he was "talking down the market."
After being foolishly fired by the Greenwich Post Mr. Fountain became a citizen journalist with a blog that is called "For What It Is Worth"
Well the Greenwich Post and Coldwell Banker are struggling with a few problems, while Mr. Fountain's blog is growing at double digit rates.
And Mr. Fountain is Greenwich Roundup's official real estate expert.
It is Greenwich Roundup's understanding that Mr. Fountain attracts over 6o0 visitors a day to his web site, except when his big shot blogger friends at the New York Times and Instapundit send his numbers soaring between 3,000 and an incredible 7,500 a day.
Here Is A Sampling Of
Chris "I Have Big Shot Friends" Fountain's
Recent Writings On The
Local And Area Real Estate Market:

What’s a builder to do?

Are we there yet?

Buying from banks is a pain in the a..

Could this be true? Probably

So what was this doing at 175 Round Hill Road?

Ah, Walt? About that Round Hill cottage - is it for sale yet?

Will tell the truth for cash

How does a homebuilder compete with foreclosed houses?

Well this settles that!