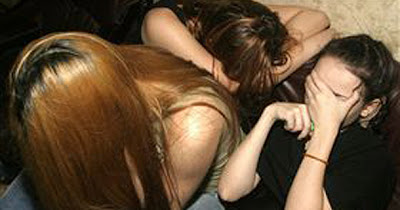 Greenwich Patsy Was A Patsy In Stamford

A Greenwich man was arrested Thursday after Stamford Narcotics and Organized Crime officers broke up an alleged prostitution ring working out of a massage parlor, where police said they caught one woman and man in a "sexual act."

A total of four people were arrested, four of them women allegedly involved in prostitution. All four women were from Brooklyn, N.Y,, including Natalia Cataraso, 41, who police called the madam of the prostitution ring.

Patsy Calvello, Jr., 67, couldn't get his pants up quick enough and caught in the act and issued summons for patronizing a prostitute. Miguel Triay, 40, of Darien, was also caught in the act.

An investigation into activities there began six weeks ago after police received several complaints about the massage parlor.

The police department's Narcotics and Organized Crime officers executed a search warrant at the parlor around 3 p.m. Thursday, forcing open two second-floor doors into two different rooms. Inside the first room, officers saw a woman on top of a man in the middle of a sexual act. In the second room, officers saw a woman clad only in a bra next to nude man laying on a massage table.

SMILE YOUR ON CANDID CAMERA!!!!

Ms. Cataraso faces charges of second-degree promoting prostitution and operating a massage parlor without a license. Police called Cataraso to come to the massage parlor after the sting operation, during which they arrested three women working there.

Rano Rakimova, 24; Maryna Rogozhyna, 29; and Alla Gindin, 39; were all charged prostitution and operating a massage parlor without a license.