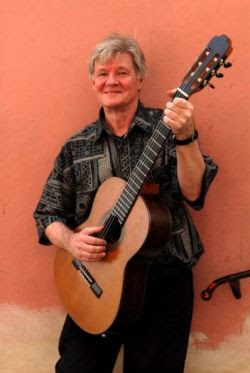 Peter Griggs, a New York-based solo guitarist/composers will perform “500 Years of Music: from the Renaissance to the Contemporary” at Old Greenwich’s Saint Saviour’s Episcopal Church on Saturday, April 24, 2010 at 3pm. The public is invited.

The guitarist has performed throughout the United States and Europe, in concerts and at festivals and museums, and has written soundtracks for documentaries and radio drama which have been broadcast on public television and radio.

The concert on April 24 will include classical and contemporary music by Bach and Thelonious Monk. Mr. Griggs will also perform compositions by Gaspar Sanz, an Spanish 17th-century baroque guitarist, Django Rheinhardt, a mid-20th-century French/Gypsy jazz guitarist, and Baden Powell de Aquino, a Brazilian guitarist who died in 2000 and composed in the bossa nova, samba and Brazilian jazz styles.

Critics have described Mr. Griggs’ guitar playing as a “master of soft and expressive tones” and “stunning in its intensity.” Mr. Griggs explains, “500 Years of Music for Guitar traces the history of guitar music, and includes Renaissance and Baroque music, as well as Spanish classical, flamenco, jazz, blues, and Brazilian music, together with some of my own compositions.”

This is Mr. Griggs first Greenwich concert. The Reverend Victoria Miller, rector of Saint Saviour’s, explains that “we are delighted to host Peter Griggs. His extensive repertoire will provide an enjoyable concert experience for both classical, jazz and world music lovers.”
===================================
Please send your comments, news tips and press releases to GreenwichRoundup@gmail.com
Posted by Greenwich Roundup at 4/12/2010 06:47:00 PM