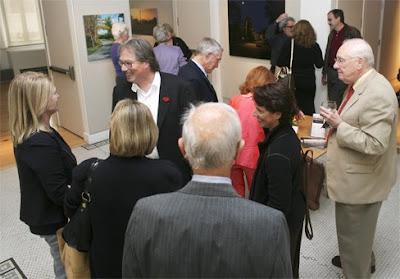 Frank Juliano gets a social send-off

Amid cocktails and conversation, Frank Juliano said goodbye to friends and colleagues at a send-off party Sunday. Mr. Juliano is stepping down as executive director of the Greenwich Arts Council. — David Ames photo

There are 7,500 public and private school kids in Greenwich who are eligible to take the bus, but not everyone does, choosing instead to have their parents regularly drop them off or drive themselves. Others walk, and some even carpool.

Residents opposing the expansion of The Stanwich School in Greenwich are appealing a decision by the town’s Planning and Zoning Board of Appeals to allow the new school to be built.

Diane M. Intrieri, a lifelong Greenwich resident, died on Sept. 24 at Greenwich Hospital, surrounded by her family. She was 58.

David M. Donald Jr., 88, a 54-year resident of Cos Cob, died Friday, Oct. 3, at Greenwich Hospital.
Born Feb. 18, 1920, in Akron, Ohio, Mr. Donald was the son of David and Nellie Donald.
He attended Kent State but volunteered for the armed services shortly after the advent of World War II. He served on the staff of Gen. Dwight Eisenhower, beginning with the North African campaign and carrying through D-Day to the end of the war. He rose to the rank of chief warrant officer, earning a Bronze Star. Mr. Donald also designed the SHAEF insignia.

Turn off the TV

I hate to admit this publicly because they might take away my column or seize my Series EE savings bonds valued at $27.98 or send me to one of those over-priced clinics for rehab and lock me up with Amy Winehouse — I don’t own a TV

Spears goes shopping on the avenue